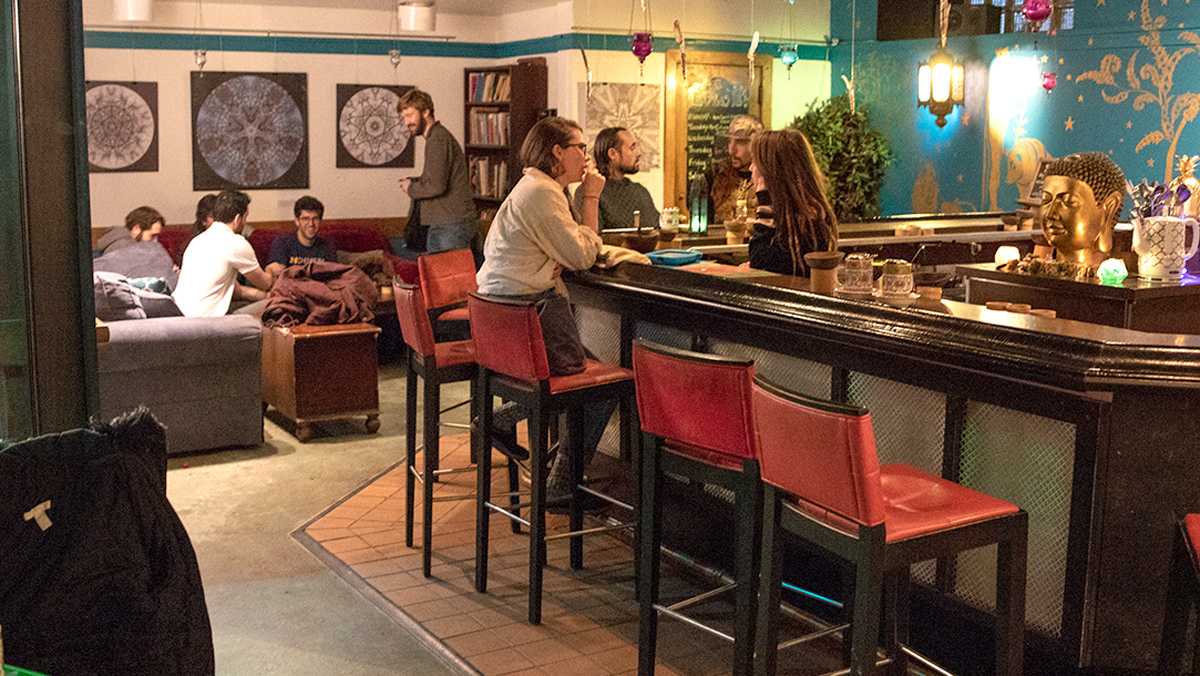 A flight of stairs leads to the Sacred Root Kava Lounge & Tea Bar, an underground treasure trove of bright tapestries, paintings and rugs.

The air smells strongly of earth and the sweet aroma of tea. Sage burns behind the bar where rows of brightly patterned mugs rest. The bar opens into an area with a stage at one side and a chess table at the other. Bean bags lay in the center of the room, circling a table adorned with crystals and candles. Friends sit at the bar, on couches and at tables, chatting. Some people are engrossed in quiet work.

A bartender is the first to greet patrons who walk in, asking what they would like. It feels cozy, friendly, peaceful and deeply spiritual.

Unlike Ithaca’s other cafes, which close in the evening, the Sacred Root Kava Lounge & Tea Bar opens at 3 p.m. and closes at midnight, making it one of the only late-night establishments that doesn’t involve alcohol in the area.

The lounge was the idea of married couple and co-owners Paul Galgoczy and Judi Galgoczy. Using his skills and experience in live–event management and her background in cafe management, the couple started their business in Sept. 2014.

“For years, my wife, Judi, and I had thought about what type of business we could open that would be really engaging and would connect with the community,” he said. “We kind of took all of our strengths and talents and pulled them together into our vision.” 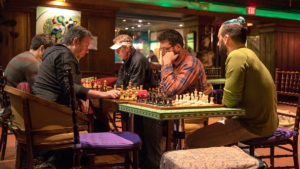 The lounge has chess tables for patrons to play at. (Elias Olsen/The Ithacan)

The walls are covered in beautiful, kaleidoscopic art pieces. The tables are as colorful as the walls, embedded with shining gemstones. A tiny room sits to the side of the bar, filled with shelves lined with crystals, henna and other spiritual goods. This is the sacred altar, where the cafe sells an assortment of items. Tea and kava are not for sale to take home at the sacred altar, but there are plenty of other items aimed at centering the soul and bringing about serenity.

Judi Galgoczy, an artist, chose the decor for the cafe, while Paul Galgoczy set up the space to accommodate large events.

“My wife is behind the aesthetic and the appearance of the space and the decor,” Paul Galgoczy said, “I helped build the area for performances and music and that kind of thing. Then we combined that with kava, which we thought was a really healthy alternative to alcohol as a way for people to come and gather and to share their talents, art, performance, ideas, conversation and connection.”

Kava is a plant found in the Pacific Islands. For centuries, Islanders have used it for medicine, social interactions and religious ceremonies. The root is harvested, ground up and turned into a beverage. It’s a nonalcoholic drink but allows for psychological and physical relaxation. Kava bars have grown in popularity throughout the U.S. within the past few decades. Paul Galgoczy said he believes there are now over 100 kava bars in the country, whereas a decade ago, there were fewer than 30.

“The island nations consider kava to be a gift of the earth and a national treasure of their islands, but it’s something that they are always … wanting to share,” Paul Galgoczy said.

Kava’s growth in popularity throughout the Western world has raised questions of cultural appropriation. Paul Galgoczy said neither he nor his wife has roots in the Pacific Islands, but that The Sacred Root Kava Bar & Tea Lounge works to respect the intentions of those who kava originates from. In June, Native Hawaiian Jon Lovgren visited the cafe to give a talk and lead a kava ceremony.

“Kava is something that all of the island cultures hold very dear, but it’s not something they feel exclusive ownership of,” Paul Galgoczy said. “Any experience that we’ve had with guests who come into the business who are from the islands, they’re always very pleased to find what they call kava culture being spread.”

In addition, Paul Galgoczy said because kava has not become corporatized, it is grown sustainably. Its export directly benefits the farmers who grow it. 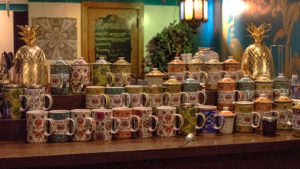 “The export of kava is something that enriches the economies of Fiji, Vanuatu, Hawaii, as well as some of the smaller nations that use kava,” Paul Galgoczy said. “It’s not something that has been taken over by large corporations, so most kava comes from small, privately owned farms, and we work with suppliers who work directly with the farmers.”

The drink itself is a light brown liquid that resembles chicken broth, and many describe the flavor as earthy. The bar serves the beverage in a coconut shell along with a pineapple slice. The pineapple slice serves as a chaser to the bitter, intensely-flavored kava, but customers can order flavored versions of the kava, like chocolate.

“We serve traditional kava as well as flavored versions, but most people don’t drink kava for its flavor,” Paul Galgoczy said.

Ithaca resident Jamie Shehu is a regular at the Sacred Root Kava Lounge & Tea Bar and said she has been frequenting the establishment at least once a week for about two months.

“I personally like the kava traditional and the kava chocolate,” Shehu said. “I’m fairly new to kava. I find it relaxing. Like if I have a whole lot of homework to do, I come here and drink some. It makes me feel completely relaxed.”

Patrons can indulge in kava’s natural relaxation agent, which many people refer to as “nature’s Xanax,” along with the many other teas the bar offers.

Other options include standard green, white and black teas. There are also some uncommon choices as well, including a tea made entirely of goji berries and one made of white peony. There are three menus to choose from. Under each selection, the menu describes, in detail, the tea’s particular flavor profile, from earthy to floral. Besides teas and kava, the Sacred Root Kava Lounge & Tea Bar offers vegan desserts.

The cafe hosts events that wouldn’t normally be held at any other cafe. On Sundays, the bar hosts reiki sessions in exchange for donations. Reiki is a Japanese healing practice where practitioners manipulate the body’s energy centers, or chakras, to help relieve stress and pain. Another notable event is the gong immersion session on Mondays, where patrons can relax and listen to the calming sounds of large gongs. The sound of these gongs is supposed to bring peace and center the soul. The cafe also hosts meetings of the Red Tent, a group of women who gather to discuss various facets of womanhood in society. Aside from these more unconventional events, the bar also holds game nights, chess matches and regularly scheduled open mics.

Ithaca College freshman Cade Ferreras said he visited the bar for the first time hoping to buy loose leaf tea, but instead, he discovered that he enjoyed the atmosphere of the cafe. Ferreras said he is planning to return to the establishment to play chess with the instructor and try kava.

Although the kava is a central aspect of the bar, community and acceptance also play a large role in the experience.

“I’ve met a lot of nice people here from different backgrounds,” Shehu said as she gestured toward two older men chatting across the bar and then to the bartender. “They’re all really friendly and nonjudgmental. Every time I come here it’s a really good experience.”

Ferreras said he also found a comfort in the community of the business.

“Just from the seven people that were there, I could tell how the community came together in this place just to relax and how welcoming they all are to someone who is new to New York and did not know that tea bars existed,” Ferreras said. “I came out with … a sense of the community that exists here, … and I am happy to be a part of it.”