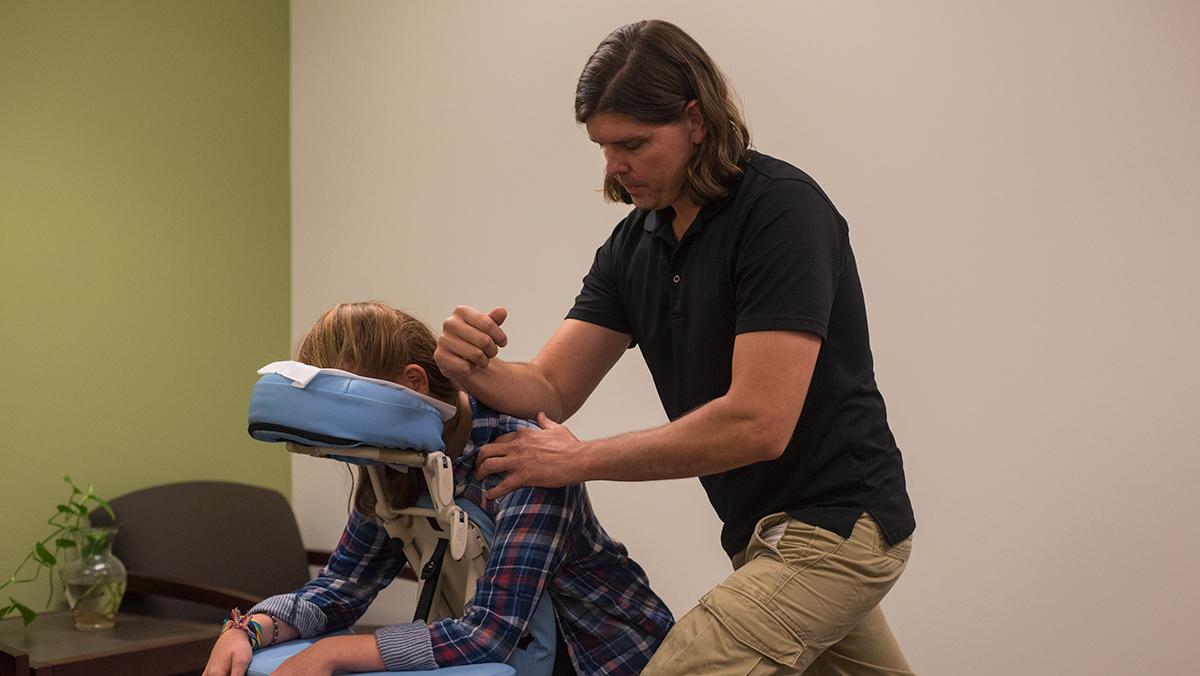 Within the Hammond Health Center lies an unassuming room called the Center for Health Promotion. With pale green walls and soft lighting from floor lamps, the room is designed to create a calm atmosphere where students can rest and learn more about health wellness. In addition to being a tranquil resource room, the Center for Health Promotion transforms once a month into the home of Massage Days.

The service began three years ago as a way for students to take a break during finals week and two years later, grew into a monthly event where massage therapy becomes accessible on campus. For $1 per minute, students can reserve appointments by increments of 10 minutes for up to 30 minutes. The next Massage Day will be held Oct. 18.

Licensed Massage Therapist Jeffery Haley has been providing the service since its inception. In addition to coming up to campus, he is also the owner of Massage Station, a local walk-in massage therapy business in Ithaca. He said his goal is to make more health and wellness programs accessible to students.

Students are able to sign up and pay for an appointment via an online form linked on the Center for Health Promotions website.

Nancy Reynolds, the program director for the Center for Health Promotion, said the center provides several wellness resources for students throughout the year, such as light therapy lamps, free condoms and brochures on student health. She helps promote the event to students through Intercom and social media.

She said the department subsidizes the price of Massage Days so students can get them for the lower rate.

“We’re able to bring them down to a dollar per minute,” Reynolds said. “Normally it would be roughly $1.50 per minute. We try to make it a bit more affordable for students.”

Haley said students come in for a variety of problems, such as stress from work or school causing muscular tension in the lower back, shoulders and other areas. He said there are even more specific cases of musicians coming in with strains on the parts of the body where they hold their instruments.

When signing up, students are given the option of filling out an intake form. This allows them to describe any specific problem areas they want the masseur or masseuse to focus on during their appointment.

“Sometimes it is just feeling overwhelmed or stressed,” Haley said. “It can be a way to decompress. Massage is kind of a facilitative meditation because they’re able to just relax — let go while the massage therapist relaxes muscle tissue.”

“I find it to be something that’s really beneficial,” Conners said. “It’s kind of something that’s out-of-the-norm for the schedule of the week, and on top of the massage you sit there and get to chat with Jeffery over everything that’s gone on over the past month. I think it’s good on that level, too. If sometimes I’ve got things on my mind — I can just chat and get them off my chest as well.”

Reynolds said the feedback has been extremely positive from the student body. She said she often talks casually to students both before and after they receive their massages and sees a difference in many of them once they leave.

“They’re extremely relaxed,” she said. “I’ve found they say there’s a feeling of well-being and tranquility after a massage — it kind of changes your mindset from one of being very stressed to feeling very good about your day.”

Both Haley and Reynolds said they plan to expand Massage Days to make them more frequent throughout the year. Haley said he wants students to have a well-rounded sense of health and wellness on campus.

“My goal is to bring awareness to all the wellness resources on campus and integrate it into the massage,” he said. “I look at it as making a healthier campus culture and being a part of that.”