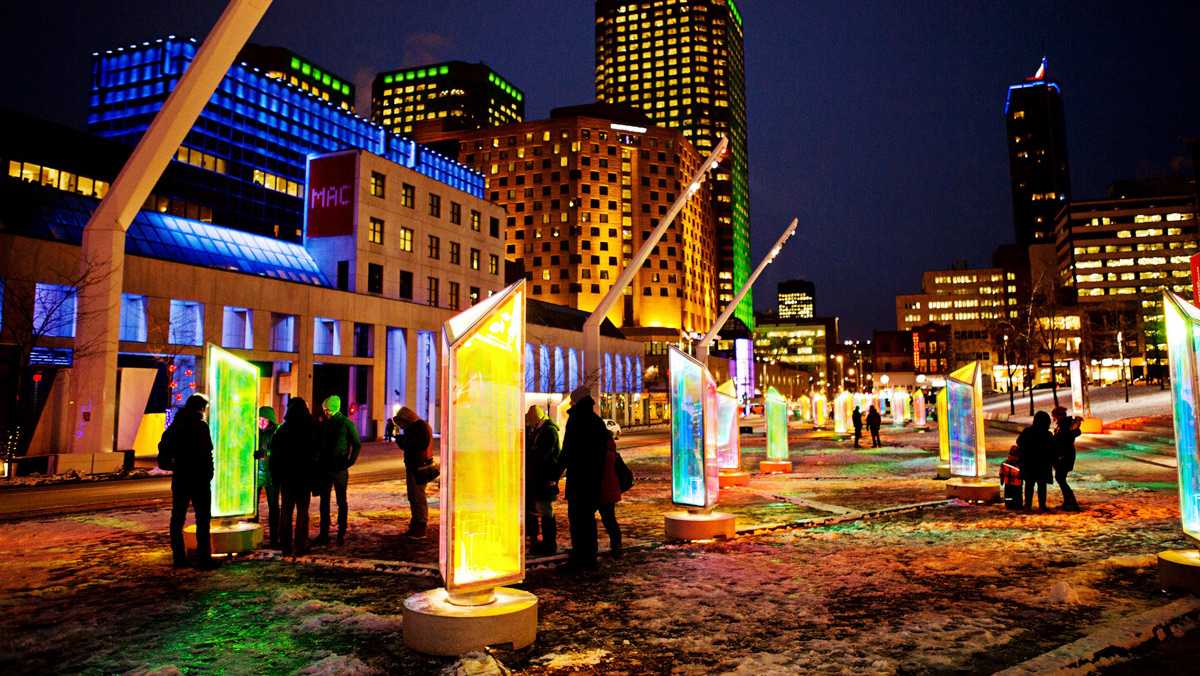 Courtesy of Downtown Ithaca Alliance
Some of the brightest attractions at the first Winter Lights Festival will be luminescent prisms that glow with colorful light. The festival will begin on Dec. 5 and end on Dec. 15 and also feature a chowder cook-off and an art bike parade.
By Maddy Martin
Published: December 4, 2019

Last December, blocks of ice were carved into dragons, knights and a surfing goat in downtown Ithaca. This year, 25 light prisms will be taking their place as the new Winter Lights Festival replaces Ice Fest.

Ice Fest was a popular staple of the city and ran for 12 years, but Scott Rougeau, special events director of Downtown Ithaca Alliance, said the festival was canceled because of concerns about cost, vandalism and increasingly warming winter temperatures. However, he said he still wants to keep the spirit of the winter season alive, so this year, a new festival will take Ice Fest’s place.

The Winter Light Festival, taking place from Dec. 5 to 15 on The Commons, will include 25 luminous prisms and events including a silent disco, the 10th Annual Chowder Cook-Off, music and dance performances, a visit from Santa, and an art bicycle parade, which will include Sparky the Unicorn, a giant, rideable art bike.

“We have a pretty artistic community,” Rougeau said. “I’m interested to see what everyone comes up with, and I hope lots of people come out and join us for that.”

The light prisms are part of Prismatica, an international art exhibit based out of Canada. The triangular prisms visiting Ithaca were shipped out of Montreal and stand over six feet tall. They sit on metallic platforms and appear to be different colors depending on the angle from which one views the object.

“A few people were sad to see the ice go,” Rougeau said. “But when we told them about all the programming and showed them what the prisms are going to look like and showed them Sparky the Unicorn, we moved most of them over.”

Rougeau said that another highlight of the event will be Sparky the Unicorn, an art piece that will lead the bicycle parade. Doug Shire and Laurence Clarkberg, Sparky’s creators and Ithaca residents, said the unicorn is 11 feet tall, made of steel and built on top of an old rental bicycle cart from an amusement park. Shire and Clarkberg made modifications to the bike so it can hold the sculpture’s weight and up to 500 pounds–worth of human riders. Two passengers can sit on Sparky’s back and two can pedal the bike itself.

“When you see something larger than life and a mythical creature that you just don’t encounter every day, like any great work of art, it will make you just plain stop,” Shire said.

Sparky has traveled all across the country since he was completed last July, appearing at this year’s Burning Man Festival in Nevada and Maker Faire Rochester, but the Winter Light Festival will be Sparky’s second hometown festival visit. Shire said Sparky will be wearing antlers and a red noise in addition to his usual LED lights and stereo system for the occasion.

“As a long-time Ithaca resident, I love giving back to my own community that has given me so much,” Shire said.

Rougeau said that the Chowder Cook-Off, which takes place 12–5 p.m. Saturday Dec. 7, is the only event being carried over from Ice Fest and that he said he expects the Chowder Cook-Off to draw the largest crowd during the festival. He said there are 30 different submissions in the competition this year. He also said that although participants are told to bring 10 gallons of chowder to the event and Downtown Ithaca supplies a thousand plastic cups total, there is still the possibility of them running out within a few hours because of the event’s popularity.

Clarkberg said he is looking forward to the festival and is excited to share it with his neighbors and friends.

“You know a lot of people in this town don’t get out during the winter,” Clarkberg said. “You don’t see anyone. It’s kinda gray, and I think the whole point of this festival is to get people outside and interacting with each other.”