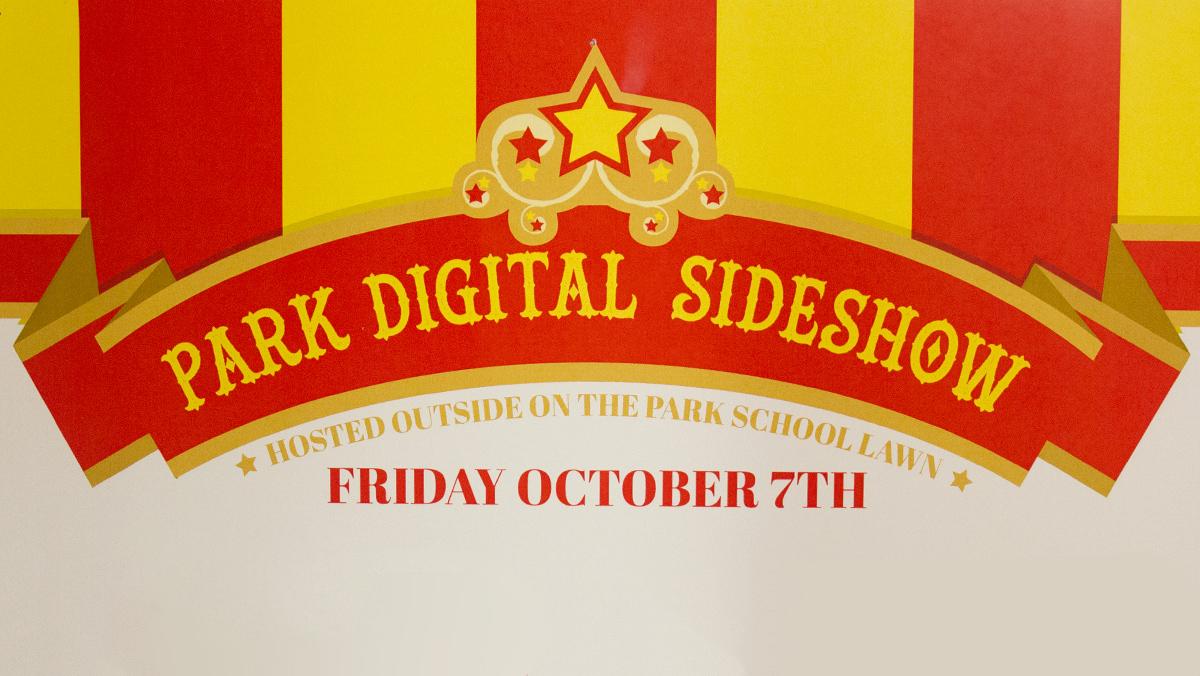 Courtesy of Roy H. Park School of Communications
These digital competitions and projects are not new to the Park school, but one new element of the production process is that the sideshow will be run by students from “Live Event Production,” a television-radio class taught by Chrissy Guest.
By Kate Nalepinski — Assistant Life and Culture Editor
Published: October 5, 2016

Four annual competitions housed in the Roy H. Park School of Communications are coming together for the first time in the form of The Park Digital Sideshow, a daylong showcase of Park Tank, the Golden Doorknob Festival, Best of Park and “The Twilight Zone” on the lawn outside Roy H. Park Hall from 10 a.m. to 10 p.m. Oct. 7.

These digital competitions and projects are not new to the Park school, but one new element of the production process is that the sideshow will be run by students from “Live Event Production,” a television-radio class taught by Chrissy Guest, assistant professor of media arts, sciences and studies, as well as one of three executive producers.

The four main components of the Park Digital Sideshow include Park Tank, the third annual competition where students compete for prizes by pitching their new media concepts; the Golden Doorknob Festival, a challenge in which students must create a film where someone dies by a doorknob; Best of Park, an exhibition of film and television projects created by current Park students and graduates; and “The Twilight Zone,” a viewing party of the television show and a trivia series about Rod Serling and all things related to “The Twilight Zone.” To conclude the event, the renovated television studio, Studio B, will be unveiled to alumni at 10 a.m. Oct. 8.

The event will also feature three technology-related tents, which play into the sideshow theme. One of the tents will feature a photo booth for visitors. Another tent will have a 3-D printer that makes trinkets for visitors to keep, and the last tent will have a virtual reality booth, in which users need to virtually cross a wood plank that rests between two bustling city rooftops.

Bob Regan, the director of the Keshishoglou Center for Global Communications Innovation and an executive producer of the sideshow, said the event was created to test the possibility of a new minor, which may be called Event Management, at the college. The minor would focus on catering to large-scale events of the caliber of the sideshow. Regan said that if the event is successful and draws a large audience, the sideshow and the course will become parts of the minor.

Regan, who has been the producer of Park Tank for the past three years, said he thought of the idea to combine all four of the on-campus Park School events into one larger production.

“I thought, ‘Maybe every year this could turn into a recognizable event, like what Park Tank has — that same brand where people expect greatness,’” he said.

Best of Park, the Golden Doorknob Festival, and The Twilight Zone, will be screened on a large blow-up LED screen on the field outside of Park Hall at different times throughout the day.

April Johanns, coordinator of student and external relations and an executive producer of the sideshow, said the students in the course are taking on the majority of the work in making the event into reality even though the dean’s office is facilitating the event.

“[The students] are the superstars of the event,” Johanns said. “They are the producers, production crew, coordinators — everything that is important to the sideshow.”

Regan said the amount of work the students have put into the sideshow is impressive and that he is aware that the students are under pressure.

“It’s more than just a class. They’re producing an event that is going live,” Regan said. “There’s a lot of moving parts. … They’re not in a classroom — they’re outside doing something and representing all of us.”

One of the producers of “Best of Park,” senior Jeremy Timmins, said he didn’t know what he was getting into when he signed up for Guest’s course.

“I’m shocked by the amount of logistics that go into it,” Timmins said. “There aren’t any small roles. If one of us falls, the show would fall apart.”

The time, date and location of the sideshow were strategically set so that it would fall during Alumni Weekend at the college and grab the students’ attention since the event is outdoors, Regan said.

“Whenever we do something in the Park Auditorium, the door is closed, and no one sees it,” Regan said. “We were looking for bigger space. We thought, ‘Let’s do it outside, and let’s bring it under a brand.’ … Outside, more people will be able to see us as they walk through the campus.”

Junior Gabrielle Hendrix, who is enrolled in Guest’s class and is one of the producers of The Twilight Zone event for Sideshow, said the opportunities she’s getting from Guest’s class aren’t things she can do in any other course.

“This course made me learn about preproduction and planning, but also to think on my feet,” Hendrix said. “Everything we’ve done has taken a lot of time and energy, but it was totally worth it.”

Senior Lenna Daniels, who is working as a producer of Park Tank for this event, said working with Guest has allowed her to feel challenged on a regular basis.

“She really pushes her students,” Daniels said. “She really thinks and believes we can do anything, and that is such a positive energy to have as a student and in a class.”

Though Regan said he is concerned because this is the sideshow’s first year and is a test run for future events, he said he has high hopes for the day.

“We’re turning the Park School inside out for the day. We’re really showing the best of us, and why not?” Regan said. “We have so much to say, and this our time to say it.”

The event will be live-streamed from 2 p.m. to 10 p.m. on the Park Media Network.

Students will have something to tweet about when Carl Quintanilla, CNBC news correspondent who narrated the documentary “#TwitterRevolution,” pays a visit to campus April 10.