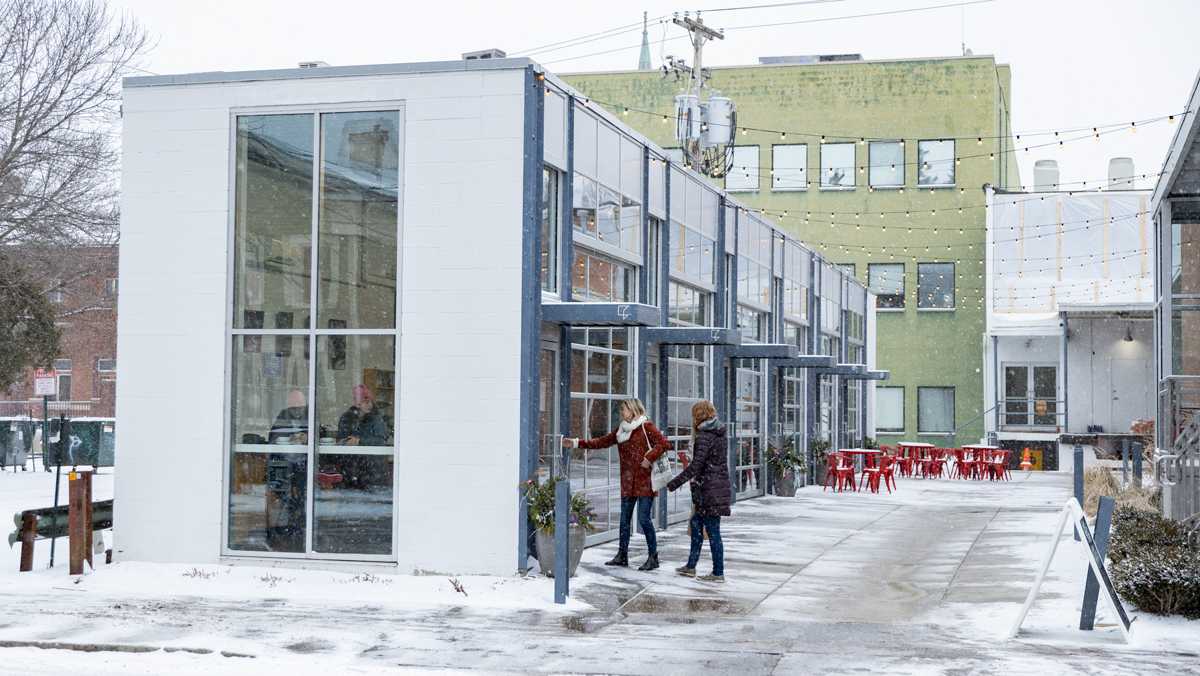 In Press Bay Alley, passersby can purchase beer, homemade hand pies and scoops of ice cream on the grounds of the former printing and distribution space of the Ithaca Journal. Located off of West Green Street in Ithaca, the alley is now home to local businesses established and emerging.

The shops are small, but the shops’ microretail style are trademarks of the alley. It is a short walk from The Commons to the alley, and the short alley is visible when driving down West Green Street. Similar to The Commons, the alley’s shops can only be reached on foot, but the alley is separate from the rest of downtown, allowing for a more private space.

First in the alley is the coffeeshop Press Cafe, which Sam Boyles ’14, a barista at the cafe, said has recurring customers. Usually, one person works at the cafe at a time, he said.

“Things are really simple,” he said. “I really prefer the vibe of working alone and not just … pumping out drinks all the time. It’s nice to still have relationships with people, and you see the same people every day.”

Every shop has a close neighbor. Diagonal string lights connect the buildings on either side. Stark red chairs and tables are placed outside Mama Said Hand Pies and piled next to Sweet Melissa’s Ice Cream shop. A plant decorated in twinkling ornaments stands proudly beside Adrina Pietra, a custom-made and vintage lingerie and accessory shop.

Inside the cafe are a few wooden tables, usually fit for two people. Greta O’Hara ’19 said she comes to the alley with Ithaca College junior Devi de Oliveira for Press Cafe. De Oliveira said she comes weekly to the alley for its array of food options, including Sweet Melissa’s weekly specials, which she monitors on the shop’s Instagram.

Whether it is once a month or once a week, O’Hara said she enjoys being in the alley for its atmosphere.

“I definitely like The Commons, but I think this is a nice, little place that not everybody knows about,” she said. “I almost like that it’s a little quieter and not as busy and crowded all the time.”

The alley formerly operated as the production center of the Ithaca Journal, with the alley itself being the Journal’s loading area. It also encompasses the Journal’s main building, a warehouse, garages and storage area, which the Journal stopped using in 2006 when it relocated its production to Johnson City, New York. As the Journal shifted its production out of Ithaca, the buildings became vacant industrial spots, said Gary Ferguson, executive director of the Downtown Ithaca Alliance (DIA). Large segments of the building became available to rent.

The Journal’s offices and Brightworks Computer Consulting, an information technology company owned by John Guttridge, shared the main building. It was assumed that any buyer would knock down the Journal’s garages and storage area, but when Guttridge bought the property in 2012, he had other, greater plans. He worked with his business partner, David Kuckuk, to form Urban Core, a real estate development company, in search of ways to fill the extra space.

“The obvious place to start was on Green Street because that area was completely unoccupied,” Guttridge said. “We saw the Ithaca Journal here as a tenant, but they weren’t actually using the very end of the warehouse, which is presently [Circus Culture], or the storage building, which is what became Press Bay Alley.”

Guttridge and Kuckuk first opened the alley to local artists through artists’ markets and First Fridays, an event that takes place on the first Friday of every month and showcases local art in a community. Around this time, DIA sponsored a “Race for the Space” competition to fill vacant spaces downtown. Guttridge and Kuckuk donated a space on the alley as a prize, which Darlynne Overbaugh, owner of Life’s So Sweet Chocolates, won. Life’s So Sweet Chocolates is no longer located in the space.

Following DIA’s competition, Guttridge and Kuckuk developed retail spaces from the Journal’s storage areas, the buildings opposite of Life’s So Sweet Chocolates, which operated from the alley’s main building. The properties’ minute sizes meant tenants would spend less money on rent, sometimes as low as $450 per month, including utilities, internet and cleaning, for smaller units. Ferguson said the smaller spaces are 200 square feet, making the rent approximately $2.25 per square foot. Outside the alley, rent in Ithaca can range from $15–$30 per square foot.

The alley was completed in 2014, and it currently hosts Press Cafe, Adrina Pietra, Mama Said, Sweet Melissa’s and the brewery Lucky Hare. Circus Culture now occupies the space that Life’s So Sweet Chocolates once filled.

Mama Said opened its space on the alley to a warm but busy reception in May 2019, said Gabe Flores, co-owner of the hand pie shop. Its opening coincided with Ithaca Festival, an annual music and arts event in Ithaca that drew bountiful crowds and attention to its new shop.

Flores co-owns Mama Said with his wife, Hiroko Takashima, and together they create hand pie recipes that draw on flavors from different cultures, like Japanese or French, and use locally sourced ingredients. On some days, Flores can be preparing approximately eight different pies — a task that can be overwhelming with the shop’s compact space.

“There’s still some growth available,” Flores said. “The cool thing with this spot here is … there’s camaraderie basically throughout this whole space. … Many of us are actually new to the alley, so I feel like we’re all in it together, learning and discussing.”

Adjacent to the alley is another set of microretail spaces called Press Bay Court, which Guttridge bought in 2017. Similarly to the alley, Guttridge said the court was mostly empty, save for one residential tenant and a dilapidated apartment. The planning and execution of the court took approximately two years, and the redeveloped space debuted January 2019.

“We saw its potential to expand the energy that we had created in Press Bay Alley, and so we applied the filters of trying to make this a collection of things rather than one big tenant — a bunch of little spaces that are fun and engaging and can create a variety of things together,” he said.

Kristin Dutcher opened Hair Color Art on the court on Jan. 2, 2019. Dutcher said she hopes her salon on the court is a stepping stone for a future larger business that encompasses both her love for hairstyling and art. Despite the small space, Hair Color Art already incorporates these aspects: A section of Dutcher’s hair studio is an art gallery, featuring pieces or artists that rotate monthly.

When Guttridge and Kuckuk first began conceptualizing the alley, they anticipated some turnover because of the properties’ compact spaces. However, when the alley experienced an extended period of stability and Guttridge bought the court, he said that he felt these businesses could become an important part of Ithaca.

“I think that really what it’s about is creating opportunity for people in a format that’s interesting and engaging and creates a canvas upon which they can paint their own business model,” he said. “I think that some concepts are bite-sized, tiny, little things. Others are going to grow and move on, and hopefully that means that the downtown environment as a whole grows from their presence.”