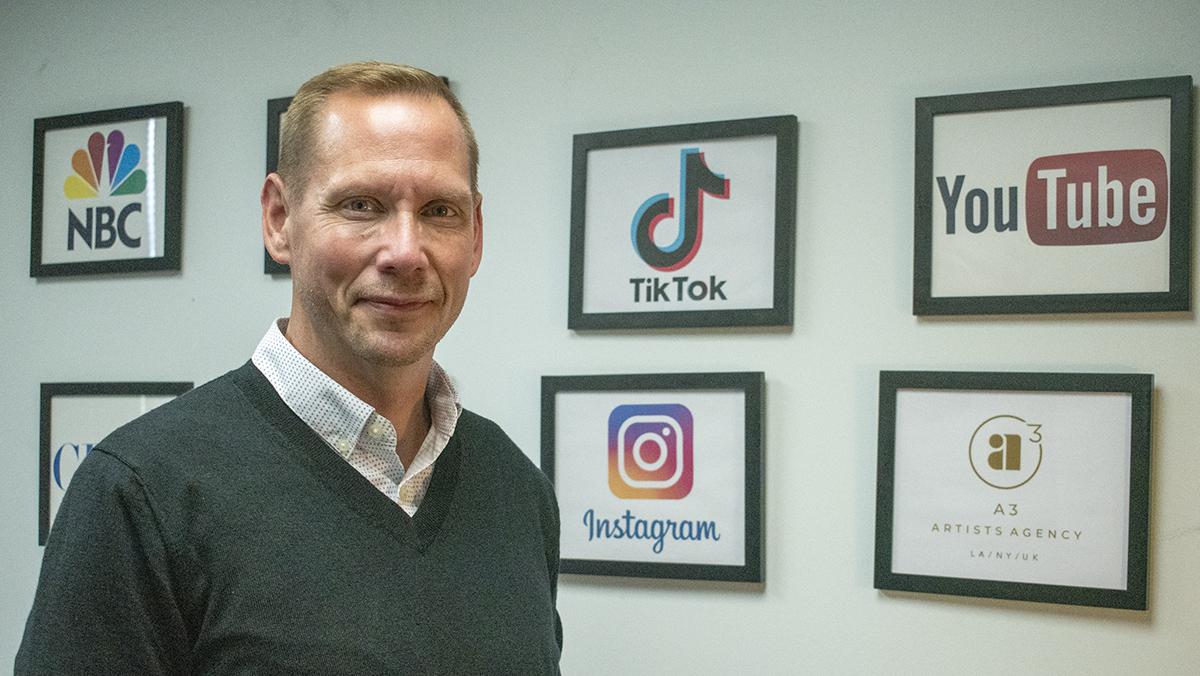 Kalysta Donaghy-Robinson/The Ithacan
Since getting TikTok famous, Ithaca College professor Peter Johanns has signed to the talent agency A3. His agent is one of his former students.
By Matt Minton — Staff Writer
Published: November 10, 2021

After gaining notoriety on TikTok with his videos of satire and humor, Peter Johanns, associate professor in the Department of Media Arts, Sciences and Studies, has now been signed to the talent agency A3. His agent is Emma Clarke, a former student of Johanns.

When Johanns first became popular on TikTok, he said his videos connected with a global audience. Last May, his TikTok fame had already gained him attention from across the world, with a little over 600,000 followers on the platform. Now, he has about 1.2 million followers as of November 2021. Johanns said that although many of the recurring jokes in his videos are still the same, like pretending to be a bad parent to his son through absurd scenarios, Johanns hopes to reach a larger audience with his content.

A3 is a full 360 agency, focusing on all possible sources to maximize client brands, exposure and income. The agency is based in Los Angeles and has offices in New York and London. A3’s partnership with Johanns is intended to help him secure future endorsement deals for his content. Johanns said he was approached by several agencies, but he ultimately chose A3 because Clarke is a Park School alum.

“I really decided to sign with A3 because of my connection with Emma Clarke … who was my former student, and I really felt that she would be working hard for me and have my back,” Johanns said.

Johanns said he has since branched out into YouTube content, gaining around 145,000 subscribers in a seven-week period by reposting his popular TikTok content. Johanns said he has also created a professional Instagram account to help develop his presence after his agent said it would be a good idea.

During her time at the college, Clarke had Johanns as a teacher for a number of production classes. Now, the two are working together to help grow Johanns’ platform. Clarke said Johanns helped show students skills for the television industry and the importance of adapting to what life is like outside of the classroom.

Since graduating, Clarke works in both the unscripted and scripted departments at A3. She represents Johanns in both of those departments. On the digital side of things, Clarke said she focuses on finding brand relationships to promote on social media platforms like TikTok, Instagram and YouTube. On the unscripted side, she represents producers and companies to help them find different jobs on shows, while also pitching projects developed by production companies to different networks.

Clarke said she and Johanns share a common goal to grow on all platforms and expand to new opportunities. One day down the road, Clarke said they hope to create a brand as a way to elevate Johanns’ voice.

Johanns said another reason why he chose to sign to Clarke and A3 is because she understands what type of content he wants to create.

“I’m not necessarily [wanting] to turn my kind of account into a strictly commercial account,” Johanns said. “I still want to create these kinds of funny and absurd scenarios that people find entertaining.”

Clarke shares a similar perspective with Johanns in regards to how being signed onto the agency won’t change the type of videos Johanns makes.

Senior Casey Honigbaum, a television-radio major, has Johanns as his advisor. Honigbaum has also taken classes from Johanns, having taught him classes in Broadcast Performance and Advanced Studio Production.

Honigbaum said he initially started watching Johanns’ TikTok videos in Spring 2021 after his first class with him.

“They’re hysterical,” Honigbaum said. “When you watch his TikTok, obviously all his humor is sarcasm and satire and that’s exactly how he conducts his classes … I’m not surprised that he’s been as popular as he is.”

Steven Gordon, program director of the Television and Radio degree, said he has known Johanns since coming to Ithaca College 12 and a half years ago. His first introduction to Johanns made Gordon realize he was an amusing character.

“I was coming up the stairs in Park,” Gordon said. “And I pulled on the door, and it wouldn’t open. And then finally it opened and a guy fell on the floor with books all over the place. That was Peter.”

Johanns said he is really happy to be working with A3 and a former student of his.

“It’s an illustration of how powerful that kind of Park network really is,” Johanns said. “I’m so very excited to see what working with Emma and A3 will be able to do.”

IC students use podcasting as a medium for expression