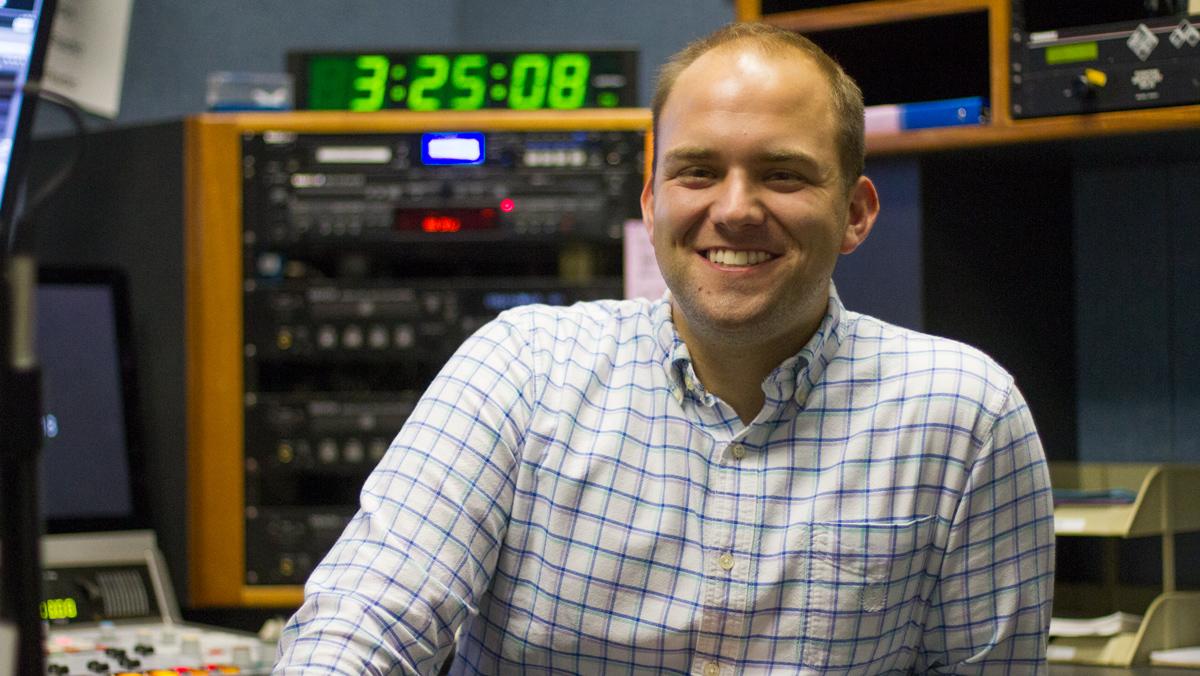 Connor Lange/The Ithacan
Jeremy Menard, the new manager of TV and Radio Operations, sits in the VIC radio booth. Menard is lifelong lover of radio and has passionately pursued a career in audio since he was young.
By Jake Leary — Life and Culture Editor
Published: August 28, 2017

Jeremy Menard is the new manager of TV and Radio Operations at Ithaca College, replacing Chris Wheatley, who retired after 32 years. He comes to the college from the Ithaca ESPN affiliate, where he worked from 2013-17. Menard graduated from Muhlenberg College before attending Syracuse University for his master’s in broadcast and digital journalism with an emphasis in sports communication.

Life and Culture Editor Jake Leary spoke to Menard about his new role at the college.

Jake Leary: You say you’ve always had an interest in radio. Do you have any specific memories of what spurred that on?

Jeremy Menard: I remember being in the car and hearing the call that Todd Pratt, who was the backup catcher for the Mets, … hit a homerun going over the center-field wall in the 10th inning and a guy named Steve Finley, who was a really good player, went up to make the catch, and it went over his glove. … And I just remember hearing the radio announcers going nuts and all that kind of stuff and telling the story, and I remember thinking that was the coolest thing ever.

JL: You’re here now. What exactly is your role at this point?

JM: So I’m general manager of WICB, the school’s FM station. I will also be, I guess, technical manager of VIC radio, so I’ll be overseeing both kind of like the, for lack of a better term, “adult in the room,” I guess. The reason I say ‘lack of a better term’ is because I think all the students are adults. The professionalism that they handle themselves with is unlike anything I’ve seen before. … And then for ICTV I’ll be doing a similar role. … I have a kind of unique background for being only 27 years old. I’ve been an onsite engineer for a commercial radio station, operations manager, program director, web master, social media adviser. … I’ve had great success, a lot of failures, and I think taking it and putting it together is what I’m looking forward to doing.

JL: You mention past failures. Do you want to go any more into one that stood out?

JM: What I mean by past failures is just little things where you’re on air. … Nothing really bad has ever happened to me. … I don’t have any skeletons in the closet or anything like that. It’s more like the temperature is 66 outside, and I said 60 — stuff like that. Or maybe I was set to do a phone interview with someone, and I pushed the wrong button on the machine so it just didn’t happen, so the interview just didn’t play.

JL: Is there anything in the Ithaca station, ICB, VIC, the TV station, … that you’d like to shift or change in any way?

JM:  I think the first part of what I want to do is sit back, and I want to listen, and I want to observe and see what’s going on. … Sports will be an emphasis: good reporting, … keeping to the formats. I think the formats of how the station is laid out is great. I think the programming is fantastic. Whether it’s the specialty shows or the modern rock, the students do a really great job of keeping it sounding good.

JM: Well it makes sense, I guess, right? If you can make everything bigger and better, I mean that’s the process, … especially with podcasts and Bluetooth and Sirius satellite radio. I still think basic, general radio is going to be around … It’s free. People love free, and it’s a good product. …There’s a talk show on VIC that they simulcasted on ICTV. That’s brilliant. … They definitely complement each other.

ESPN host discusses how IC laid the foundation for his career