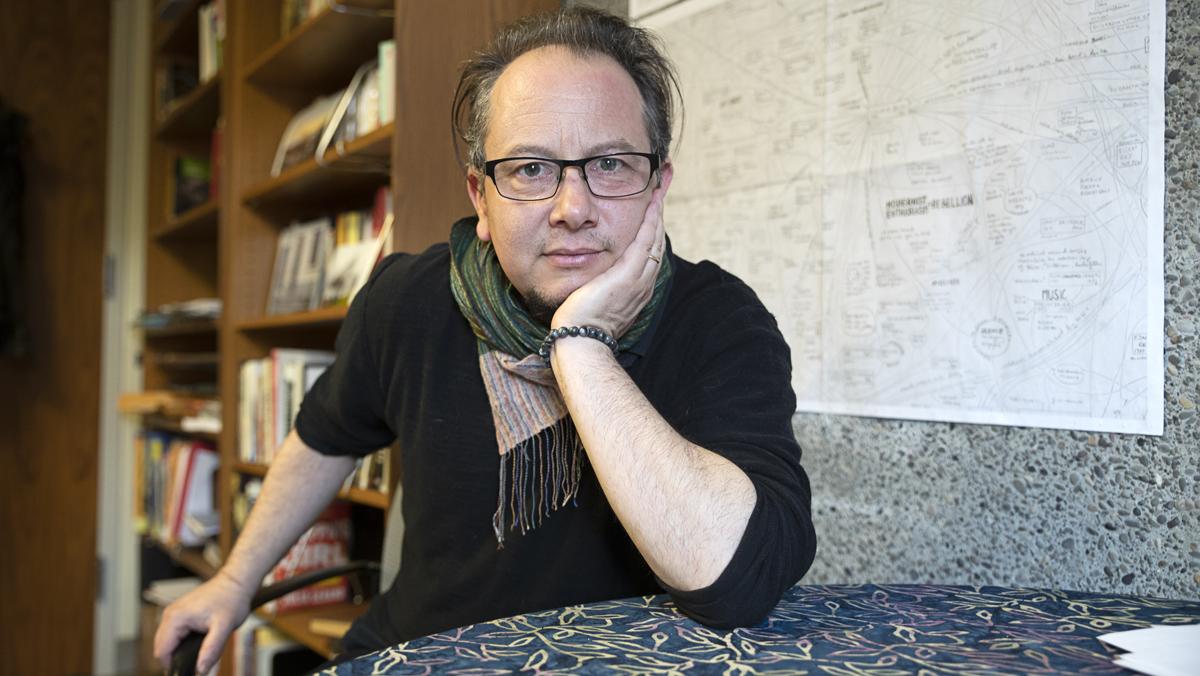 Tenzin Namgyel/The Ithacan
Mat Fournier contributed to a collection of short stories, "“Deleuze and Children.” He wrote an entry about transgender children and analyzed the political perspective that society has when it comes to transgender children
By Ashley Stalnecker
Published: March 26, 2019

Mat Fournier, assistant professor in the Department of Modern Languages and Literatures, is bringing discussions about transgender children into an academic setting.

He recently published a book chapter, “Just Tell Them I’m a Chipmunk: Transgender Children and the Breach in the Oedipal Gender Assemblage,” in a collection of short stories, “Deleuze and Children.” Fournier draws from his own experiences and the work of French philosophers in his chapter of the book, which was published in January 2019. Fournier brings his knowledge of the French philosophers Gilles Deleuze and Félix Guattari, who wrote about identity and the problem of the individual, and his own research to discuss transgender children and the difficulties they encounter.

Staff writer Ashley Stalnecker spoke with Fournier about what influenced his writing and what he hopes its effect will be on readers.

Ashley Stalnecker: Could you start by summarizing the chapter?

Mat Fournier: The chapter is talking about transgender children, not in a purely psychological perspective but in a political perspective. So, it is how trans children are discussed, the question they raised, the hatred they sometimes attract and what it says about our social rules in general — heteronormativity, in this case. And, also, how we think about gender. So, thinking about trans children can teach us about our society in general.

AS: What were your main influences in writing this chapter?

MF: My own experience as a trans person. Also, the works of those philosophers. And I’ve also been interested a lot by queer theory and queer studies. For instance, in the chapter, I quote a lot of a book called [“The Queer Child, or Growing Sideways in the Twentieth Century”] by Kathryn Bond Stockton, who is a queer scholar interested in children and the things we tell about them. I’d say, mostly, it’s queer theory and the philosophical work of Deleuze and other French philosophers, such as Foucault and Hocquenghem, who’ve been thinking about children and also about medicine and social norms in, sometimes, in a very critical way and problematic, I’d say.

AS: Why is it important to write about this subject?

AS: What are the effects and implications you think your chapter will have?

MF: I think one of the main and broadest issues in raising the article is how we talk about trans children. … One side of the question is obvious: It’s bigotry and hatred and also stupid judgment and stupid assumptions about trans children. For instance, the idea that they’re going to have surgery at seven and that they’re being influenced by bad parents. And, so, all this on this side, it’s kind of obvious — I mean, it’s always surprising and hurting — but it’s obvious that you’d find some very violent attacks. … So, that’s one problem that is easy enough to identify even though it’s always important to discuss it. And, the other problem is I’ve been reading a lot of literature meant to be supportive for trans kids and their parents. And, as a trans person myself, at some point when I was doing the research, I found myself surrounded by piles of books explaining to people how to deal with people like me. And, at some point, I started to find it offensive as well. … This literature is also talking about people struggling with their identities. But, the struggle doesn’t come from what you feel about, particularly in the case of children, but what you are getting from other people. The struggle is how it starts with others. When framing it into terms of struggle and life-changing situations, it doesn’t help. It doesn’t help families. It certainly doesn’t help trans people themselves — kids or grown-ups. That’s what most surprised me when I was writing this article.

AS: Going into this, what were your hopes for the publication?

MF: I had two hopes. One, making obvious the absurdity or the violence that … are said about trans kids. So that’s one hope. And the other hope is showing how the idea of gender pertains to everything we are doing. For instance, the idea of how you raise your kids, the idea of what is a family or what is an individual, on which is defined by gender, on which gender is defined by set norms.

AS: Is there anything else that you think is important to say about the publication?

MF: I’m not an activist, so my primary goal is not to fight for people’s rights or for people’s immediate well-being. I still hope that trans kids and adults are going to get more respect in a way. Because sometimes it’s not just about fighting active discrimination. It’s about just being okay with it. Like, not making a drama out of it. And I hope different kids will stop being a drama. It’s probably too much to hope for.