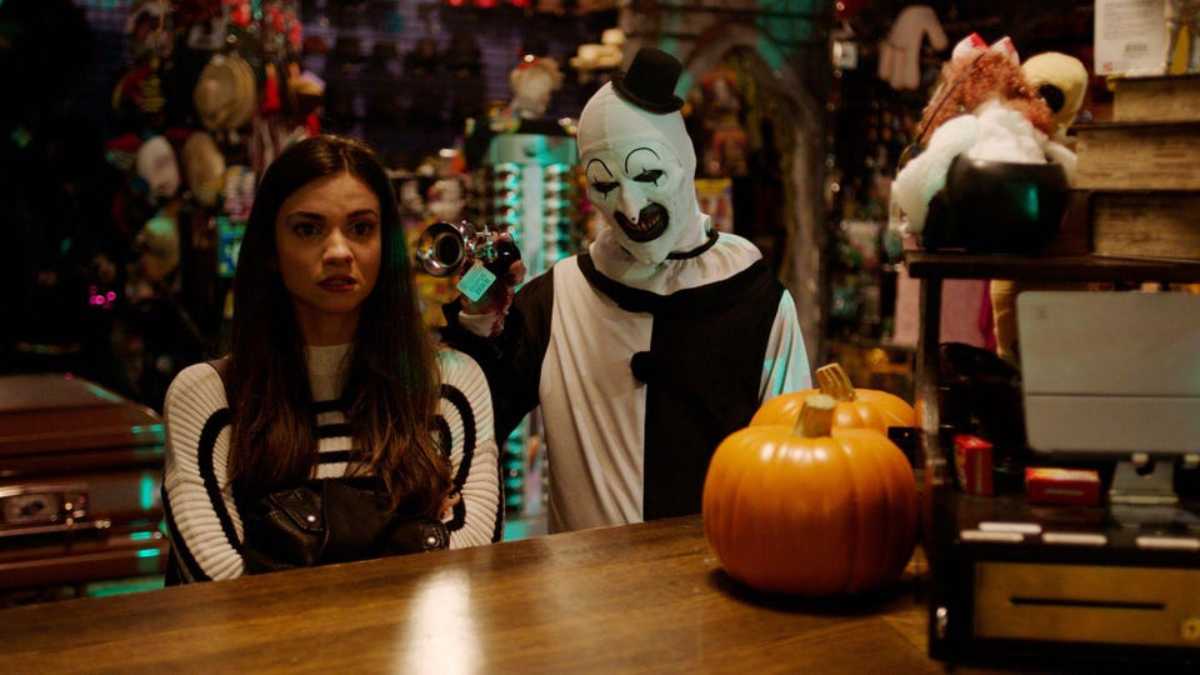 “Terrifier 2” is director Damien Leone’s newest foray into the popular slasher franchise, which doubles down on the blood and extreme gore of the first movie. The first “Terrifier” (2016) film is considered to be an underground cult classic in the slasher genre by many horror fans. However, many have criticized the film: not just for its excessive violence but rather for its lack of a strong and well-written protagonist, as well as some sexist undertones. “Terrifier 2” manages to fix these issues by providing a stronger female lead and an overall more well-rounded narrative. This allows the film to heighten the intensity and vulgarity of the first movie while still managing to feel less mean–spirited.

The biggest attraction to this series is its merciless villain Art the Clown (David Howard Thornton). Never has a horror villain been so completely sadistic in nature. Art the Clown will mangle the corpses of his victims until he gets bored, and this newest film continues to test the limits of how far he can go. The big allure behind the character is the mystery surrounding his identity and motives. Is there a deeper reason to why he does what he does, or is he just pure evil? “Terrifier 2” heavily leans into the ethos behind the character while still revealing very little about his backstory.

The film picks up right where the first one left off. After Art killed himself to escape being caught by the police, he was seemingly resurrected to continue his murderous rampage. This time around, he has his eyes set on two siblings from Miles County who are getting ready for Halloween night: Sienna (Lauren LaVera) and her younger brother Jonathan (Elliott Fullam), two kids still in grief over the loss of their father. Their father plays an important role as when Jonathan discovers some of his old drawings, it reveals more about the mythology behind who Art is and Sienna’s role in a greater prophecy.

It is admittingly impressive that the first movie was made with the extremely low budget of only $35,000, but there is still a level of cheapness to it that is not as present in “Terrifier 2.” The new one was given a larger, but still moderately low, budget of $250,000, and it is clear while watching it that the filmmakers used every last dollar. This is clear in the over the top special effects work that was done, in part by Leone himself, as well as the film’s strange runtime of two hours and 18 minutes. “Terrifier 2” is not just one of the bloodiest slashers ever created, but it is also one of the longest. While such a long runtime is admirable for a film of its stature, it can also be somewhat detrimental to the engagement of the story.

For a movie so hyperfocused on making the audience sick to their stomach with the amount of excess gore, having such a long runtime begins to feel like overkill. There are so many scenes that are partially important to the story, but they go on for what feels like forever. Also, the longer runtime makes it harder to ignore its flaws. There is a certain element to the main characters’ backstory that is hinted at many times throughout the film, and while the details are a bit muddy, it is mostly clear what the writers were getting at. However, by the end, that element goes nowhere and nothing is revealed. This may be because the writers are waiting until the inevitable sequel to fully dive into the storyline, but after over two hours of runtime, it just feels like wasted time.

Still, credit must be given for how much of a leap in quality “Terrifier 2” was over its predecessor. Fans of the first one will, without a doubt, be enthralled by all of the blood-curdling kills that have only gotten bigger and bloodier. Those opposed to the first movie will be won over by the massive improvement in tone, characters and story. There are scenes in this movie that will be burned into the mind of audience members, and horror fans will continue to reference them for years to come. Despite its flaws, it is not far off to say that “Terrifier 2” will become another modern cult classic in the horror genre.