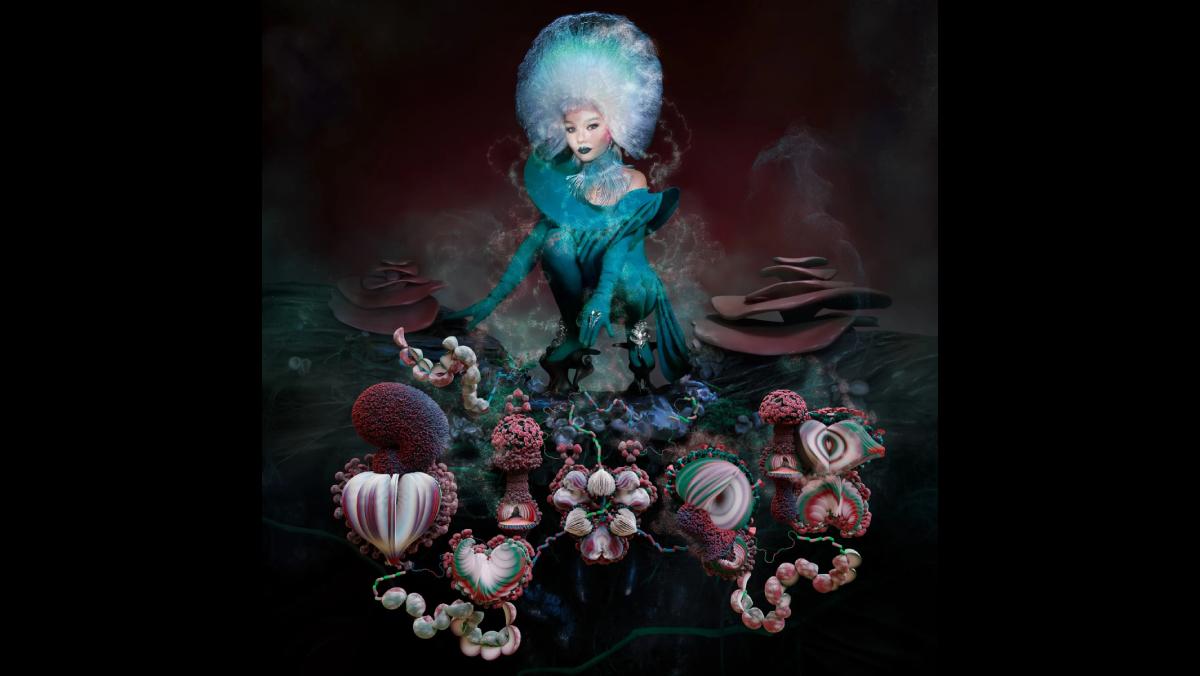 Courtesy of One Little Independent Records
Following the death of her mother, isolation of the pandemic and departure of her daughter, Björk returns with a scattered yet successful album.
By Jess Williams — Staff Writer
Published: October 12, 2022

It has been nearly five years since Björk’s last record, the heavenly “Utopia,” an album that takes place in a paradise in the sky teeming with birdlife and many flute passages. On “Fossora,” Björk returns to Earth. Following the death of her mother, the isolation of the pandemic and the departure of her daughter, she crafts a scattered album that catches listeners up on this era of her life, tied together with reed orchestras and hardcore electronic beats.

“Fossora” is Björk’s “mushroom album” (whatever that means), a claim she has affirmed since the album was first confirmed but was never fully supported with explanation. When listening to the full project, it is easier to see what she means. “Fossora” is dark, mystical, fantastical and fun. The silly bass clarinet melodies that envelop the majority of the album sounds like the soundtrack to a fantasy woodland adventure with glowing plants and dancing woodland creatures. If this sounds too specific, one listen to the track “Fungal City” will convince otherwise.

In true mushroom fashion though, “Fossora” doesn’t present a focused sound. Björk gives heavy emphasis on the bass clarinet and gabber, a form of hardcore electronic music. The title track “Fossora” and the lead single “Atopos,” being the most gabber influenced tracks, both build up to a head-banging, hardcore breakdown during the final leg of the song.

“Fossora” attempts to break apart from the subjects portrayed on 2015’s “Vulnicura” and 2017’s “Utopia,” which were reactions to Björk’s divorce with her husband Matthew Barney, but grief still finds its way onto the album. As a tribute to her mother, who passed away during the creation of this album, Björk includes two emotionally crushing songs about her passing, “Sorrowful Soil,” and “Ancestress.” The latter includes some of Björk’s most stunning moments and best lyrical highlights in recent years.

“The machine of her breathed all night / While she rested / Revealed her resilience / And then it didn’t,” she sings on “Ancestress,” her voice emotionally strained.

The two tracks dedicated to her mother land next to each other on the tracklist. Afterward, “Victimhood,” and the short interlude that precedes it, continue the darker, more somber tone. “Victimhood” returns to the subject of Björk’s divorce, which is a topic that she has made a full album about. The song finds its place to settle in on this album, but since it is placed right next to “Sorrowful Soil” and “Ancestress,” a tonal break is needed.

After this dim emotional point on “Fossora,” Björk exposes the listener to more carefree material, like the flute-driven “Allow” that depicts a blossoming friendship, or the aforementioned “Fungal City,” which is of course about a fungal city. “Freefall” is another highlight on this album, becoming another masterpiece in the canon of incredible Björk love songs. The string arrangements on this song are stunningly beautiful, and the pace-switch to plucked strings at the midpoint is equally magical. Everything builds up to a climactic finish that retains enough subtlety to remain both mysterious and gorgeous.

The closer, “Her Mother’s House,” features background vocals from Björk’s daughter, Ísadóra Bjarkardóttir Barney, as Björk sends off her 19-year-old daughter into the world. The ballad is a sweet duet between the two, written to be somewhat humorous and self-deprecating as Björk lets go of her overprotectiveness. The track is a wonderful and bittersweet moment to wrap up a rather scattered selection of songs.

“Fossora” is arguably the most uncoordinated concept Björk has undertaken since 2007’s stylistically insecure “Volta,” but her execution here works surprisingly well. She brings together lamentations of grief with songs of boundless fun, letting the focus on low-end sounds, gabber influenced drum-machines and the bass clarinet tie everything together into a cohesive experience.