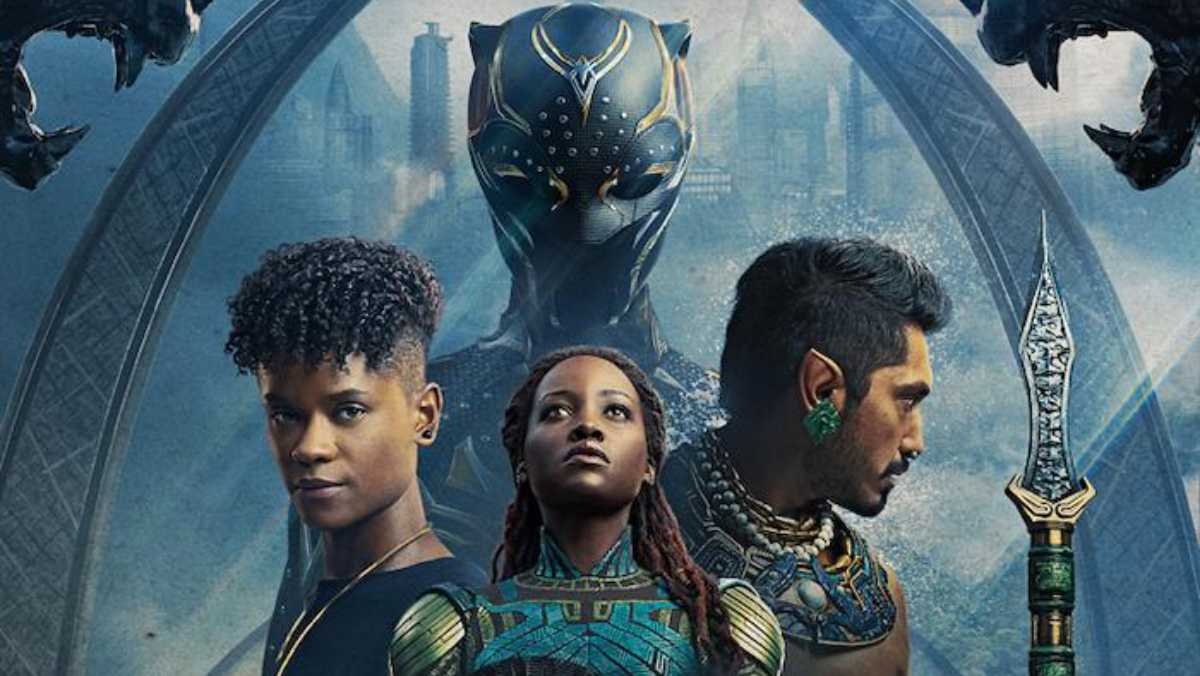 “Wakanda forever” is not just a battle cry for the people of Wakanda. It is a phrase that evokes a belief that those who are lost are never truly gone. They will always be there. “Black Panther: Wakanda Forever” is a heartfelt farewell to Chadwick Boseman, someone who was a hero to many on and off screen.

“Black Panther: Wakanda Forever” picks up on Queen Ramonda (Angela Bassett) and Shuri (Letitia Wright) as they mourn the loss of T’Challa (Boseman). When a new threat arises in the absence of the Black Panther, led by the menacing Namor (Tenoch Huerta), Ramonda, Shuri, M’Baku (Winston Duke) and Okoye (Danai Gurira) must fight to protect their nation from this deadly foe.

“Black Panther: Wakanda Forever” is certainly exciting and action-packed. However, more importantly, it is character-driven at its core. Director Ryan Coogler, who makes his return after directing the original film, released in 2018, has crafted an intimate story that gives everyone involved, including the audience, the ability to sit with the film’s characters and grieve the loss of Boseman.

While the characters have lost their protector, the production team and actors have lost a friend in real life. Their loss and grief exude through some of the cast’s brilliant performances. Bassett in particular is phenomenal. She has several dramatic moments that are some of the most powerful in the film. Ramonda has lost nearly everyone she loves. The raw emotion that Bassett induces into this character is heart-wrenching. Yet, she is also able to use that emotion to take control of various situations.

Wright is also a key standout in the large ensemble. Whereas in previous entries she has appeared in the Marvel Cinematic Universe, her character existed as more of a comic-relief sidekick, in “Black Panther: Wakanda Forever,” the stakes mainly rest on her shoulders. In this regard, Wright was given a task that many might have considered insurmountable, yet she commands the screen and ascends to a much larger role with ease. Her journey is perhaps the most emotional. As she grapples with her grief and the beliefs of her culture, she comes to understand her purpose and who she must become to protect Wakanda.

Other standouts in the cast include M’Baku, Okoye, Nakia (Lupita Nyong’o) and newcomer Riri Williams (Dominique Thorne). Each of these characters has their own moment to shine. Thorne in particular was a delight in multiple scenes, leaving viewers eager to see where her character will go next in later cinematic or television entries.

Coogler’s direction is mostly stunning. He proves once again that he has a talented eye for visuals and alluring action sequences. He employs several techniques that make some of the film’s action pop, like the use of hyper slow-motion whenever one of the water bombs used by Namor’s army explodes. However, Coogler too often decides to constantly cut in close-quarter combat scenes rather than allowing the action to flow in shots that would make everything easier for the audience to follow.

Another standout is Ludwig Göransson’s incredible score. The composer, who won an Academy Award in 2019 for his work on the original film, once again stuns the senses, producing several melodies that contribute to many moments of excitement and emotion.

Although Namor is an intimidating presence as the main antagonist, his motivations and character never quite reach the heights that Killmonger (Michael B. Jordan) inhabited as a villain in the original “Black Panther.” The inclusion of Namor’s character certainly sets him up for future appearances where he will likely be more fleshed out, but his first appearance in this film provides a very promising beginning to where he may go in the future.

An element of the film that simply did not work was the inclusion of a side plot involving Everett Ross (Martin Freeman), a character who appeared in a supporting role in the original film. Ross’ inclusion in “Black Panther: Wakanda Forever” feels utterly forced and too often detracts from the film’s main story to remind viewers that they are watching a Marvel film, which connects to and sets up other Marvel films. His character contributes nothing to the overall story and his inclusion takes up around 10–15 minutes of screen time that could have been used elsewhere — or cut entirely to make the film feel more concise.

“Black Panther: Wakanda Forever” provides fans of “Black Panther” everything they could ask for, allowing them to witness one final tribute to Boseman’s legacy. In remembering the past, the film paves the way for a future that will continue to honor the actor through the Black Panther mantle.