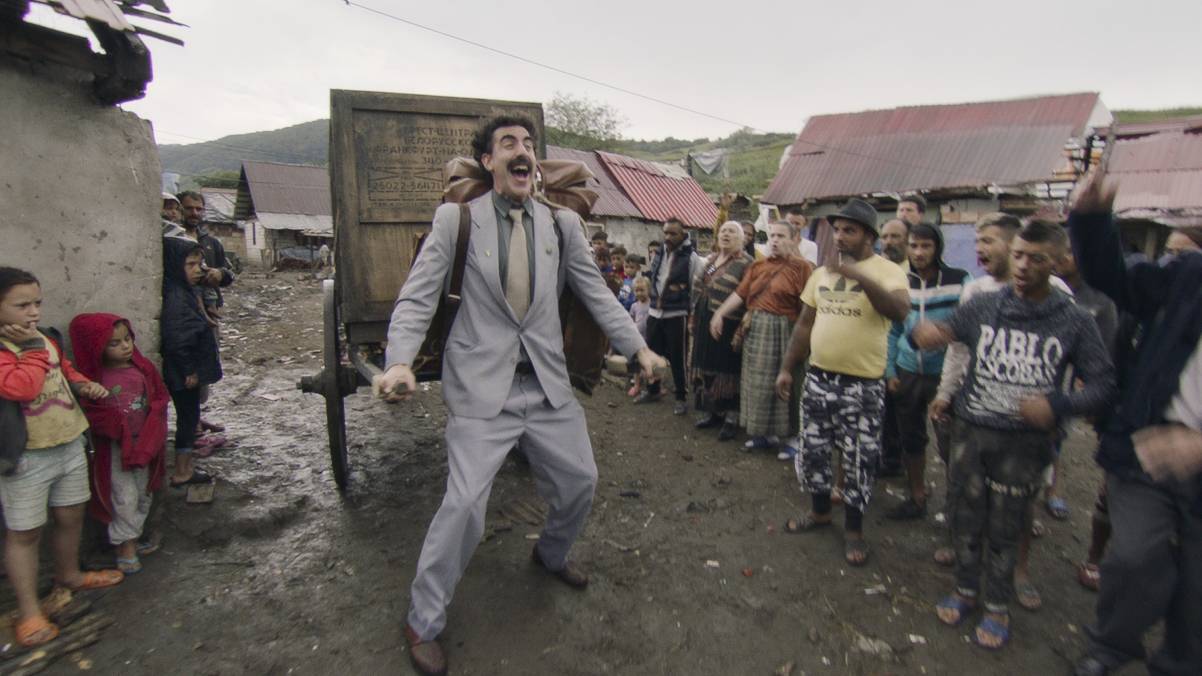 Courtesy of Four By Two Films
Sacha Baron Cohen’s sequel to his famous film “Borat,” “Borat Subsequent Moviefilm,” exposes the bigoted underbelly of the United States just as the first one did.
By Jackson Noel — Staff Writer
Published: November 3, 2020

Rarely is a movie released at exactly the right time — when the topic filmmakers aim to prod lines up with an agitated national climate. Such is the case for Sacha Baron Cohen’s follow-up to his 2006 film “Borat,” aptly titled “Borat Subsequent Moviefilm.”

In the 14 years since the events of “Borat,” the fictionalized version of Kazakhstan has been ashamed by Borat’s (Sacha Baron Cohen) failure to gain insight into American culture. To rehabilitate the image of the country, Borat is sent to the United States to deliver a gift — which happens to be his own daughter, Tutar (Maria Bakalova) — to the American government and curry national favor. This scripted plot serves as the vehicle for Cohen to travel around the U.S. and interact with real people under the guise of filming a documentary.

The appeal of these films is Cohen in character feigning ignorance to convince people to reveal their ugliest insides. Both “Borat” films are controversial for their anti-Semitic and racist content. The joke, however, is not the things said but rather how easily Borat can evoke bigotry from ordinary people. The humor goes for shock and awe, and, more often than not, it works.

Much of this film was produced in late 2019, with filming taking place throughout 2020. This allows the filmmakers to reflect current events like COVID-19 and political turmoil as they are transpiring. On top of infiltrating a conservative political action committee and debutante ball, Borat finds himself at a March for Our Rights rally and quarantining with two conspiracy-theory–touting Washingtonians. The situations involving Borat are more explicitly political than the first film, but no one should be surprised — “Borat” has always been political. The ability of the filmmakers and Cohen to adapt to the pandemic is admirable. It would seem as though the pandemic only sharpened Cohen’s satire of President Donald Trump’s U.S.

The most welcome addition to the film is Bakalova’s thankless appearance as Borat’s daughter. Despite being a new performer alongside a seasoned comedian, she completely holds her own. Acting as a bounce pad for the sexism of a seedy plastic surgeon and eventually a member of Trump’s closest circle is no easy task. Like Cohen as Borat, she is able to pierce through the civilized guard of the subjects and get them to admit things they would normally say only privately. Thankfully, the film is as much Tutar’s as it is Borat’s.

The biggest detractor of “Borat Subsequent Moviefilm” is that the humor is not as shocking the second time around. The comedy occasionally feels redundant when many viewers are accustomed to this type of Trump-era satire. Cohen’s commitment to pushing boundaries brings the political satire into an edgier arena. However, if one can find the space to laugh through the horror of the present day, they will find a rewarding experience.

The film summarizes its message with an endnote, simply saying, “Go vote.” When the dust settles on 2020, “Borat Subsequent Moviefilm” will rise as an essential comedy of the Trump era. The movie will be remembered not for depicting the country how it would like to but as it really is. Cohen and the filmmakers shine a light on the worst aspects of American culture and point to where the work needs to be done. It makes a statement while getting laughs that slowly morph into disgusted eye rolls. Released around a historic election, this movie could not have come at a better time.