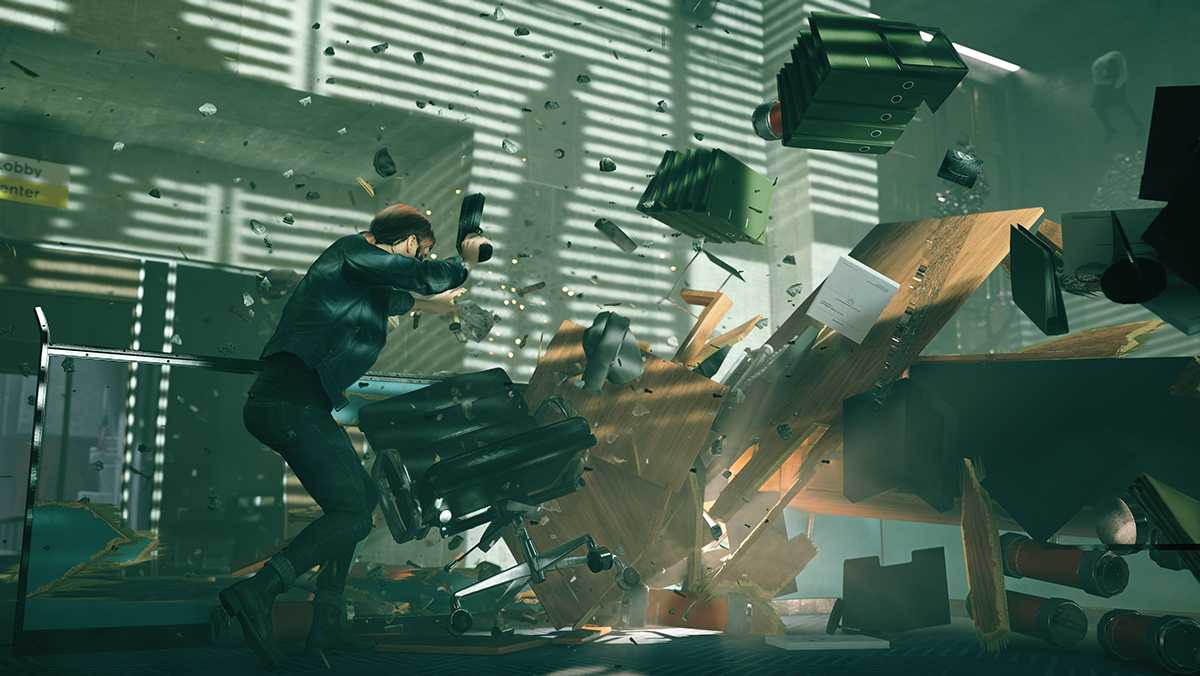 Remedy Entertainment
"Control" follows Jesse Faden while she searches for her missing brother who went missing 20 years ago. The game is plagued with stagnant battles but is, ultimately, a piece of well-cultivated gameplay.
By Jake Leary — Staff Writer
Published: September 18, 2019

The player acts as Jesse Faden (Courtney Hope), a woman searching for her missing brother Dylan (Sean Durrie). Approximately 20 years after he vanished, she discovers the Oldest House in New York City, home to the Federal Bureau of Control and, she suspects, Dylan’s kidnappers. Unfortunately, Jesse shows up at a bad time. The vast, brutalist structure is under siege; most of the agency workers have been hijacked by a viral, extra-dimensional plague called the Hiss.

She’s quickly and counterintuitively recruited into the organization, assuming the role of director minutes after entering the building. Armed with the Service Weapon, a modular gun bequeathed to directors, Jesse purges the Hiss with the help of a cosmic entity she dubs Polaris.

The Oldest House has always been bizarre even before the Hiss warped the building’s structure, making the walls ripple and twist. A sentient black pyramid beams orders into Jesse’s brain; everyday objects imbued with supernatural powers wreak havoc; and a hidden, ever-shifting maze rearranges itself with the staccato snap of a shuffling deck of cards. But the office is also ordinary, brimming with mundanity and tedium. Like any large bureaucracy, the Oldest House is a festering hive of paperwork, red tape and interpersonal frustration.

At first glance, the building’s cluttered offices and stark hallways seem like standard video game fare — some random signage here, a few scattered desks there — but look closer, and the Bureau’s peculiarity becomes apparent. Signs instructing employees to wash their hands, for instance, don’t warn against the spread of germs but the proliferation of the capital-m Mold, a gloopy residue that occasionally vomits acid onto Jesse as she walks past.

The game’s best moments are its mellowest when the player is free to appreciate tiny details and probe the Oldest House’s many mysteries, several of which Remedy reveals through audio logs and collectible text files.

Logs describing Jesse’s past, her first encounter with the supernatural and subsequent search for the Oldest House teem with evocative and terrifying one–liners. Other documents detailing Bureau investigations fill out the game world and offer fan service tidbits for long-time Remedy Entertainment acolytes.

Jesse spends considerable time patrolling the Oldest House’s halls with her gun drawn. Early sections play like a standard third-person shooter. Jesse blasts baddies, hides behind cover and collects upgrade currency. As she progresses, she acquires powers derived from artifacts left around the Oldest House — she learns to dash from a possessed carousel horse and develops hypnosis after exorcising an X-ray lightbox.

Jesse’s abilities mostly improve the player’s ability to move around levels, making it possible for her to zip around a lobby, head-shotting one enemy while she levitates above the action and waits for her energy to refill. Small encounters offer enough opportunities to experiment with her moves without drowning her under insurmountable hordes of Hiss.

But late-game battles lock her in spacious arenas and throw enemy after tanky enemy her way. Jesse’s power set — especially her telekinetic throw — makes quick work of grunts, but when she’s surrounded, no amount of concrete-chucking can save her. Climactic fights should be kinetic, exciting spectacles, but tedious fights and a handful of technical issues kill the game’s momentum.