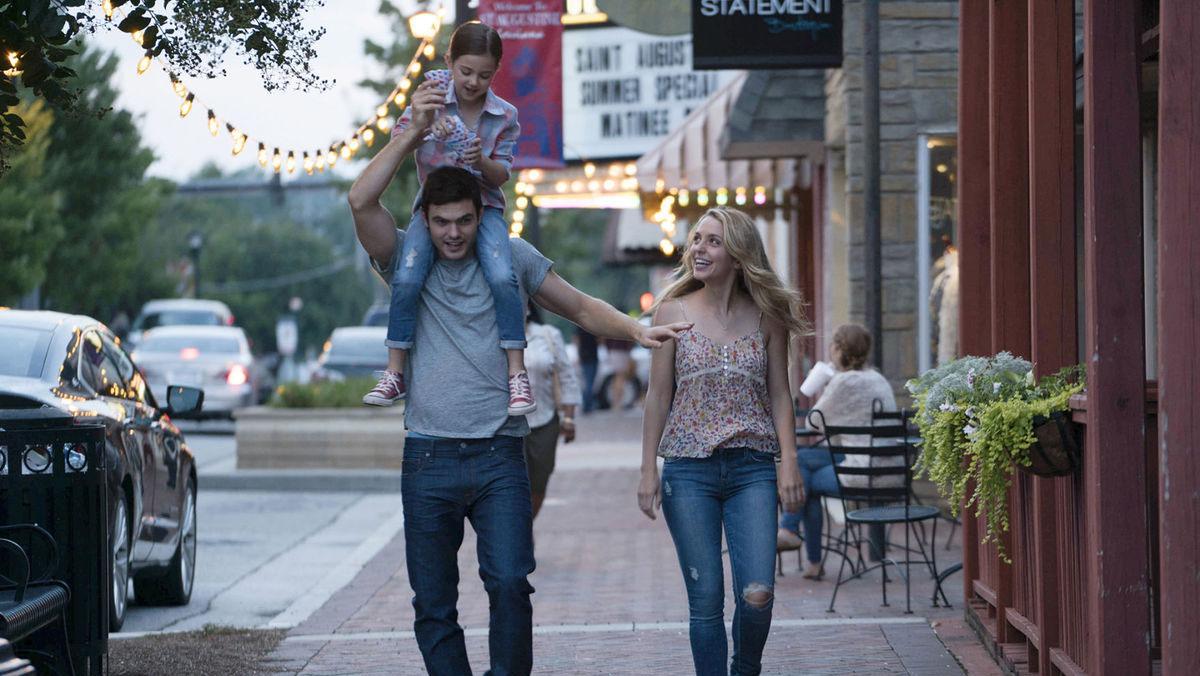 LD Entertainment
"Forever My Girl" centers on country star Liam Page (Alex Roe) as he repairs his relationships with his ex-fiance and daughter after abandoning them to pursue fame.
By Liza Gillespie — Staff Writer
Published: January 30, 2018

“Forever My Girl” feels like a Hallmark Channel movie that mistakenly got a wide release.

Written and directed by Bethany Ashton Wolf and based on the novel of the same name by Heidi McLaughlin, the film opens with a flashback to a small Southern wedding. The ceremony has yet to begin, but the characters’ explanatory and foreboding dialogue lets viewers know the event is destined for failure. A woman makes her way into the church and tells everyone she passes how excited she is for the marriage. The opening line may as well have been, “Gee, I sure hope this wedding all goes to plan! It would be a darn shame for anything to go wrong.”

The story follows Liam Page (Alex Roe), a self-indulgent country music star, as he returns to his hometown in Louisiana after eight years. Upon his return, he is faced with the resentful community of people he left behind to pursue stardom. The most resentful is his ex-girlfriend, Josie (Jessica Rothe), whom he left at the altar in the opening scene. She is also, to Liam’s surprise, the mother of a 7-year-old daughter he never knew he fathered.

The film centers on Liam’s redemption through the rekindling of his love with Josie and the blossoming of his relationship with his daughter, Billy (Abby Ryder Fortson).

“Forever My Girl” would be a fine film to half-watch when sick in bed on a rainy day. The beautiful backdrop of summer in the South results in a comforting and warm atmosphere. It also offers zero nuance to the love story formula. Its tropes of an entitled bad boy and his pure and flawless female love interest are too flat to even fill the tired mold of the Southern romance subgenre popularized by Nicholas Sparks. The film holds the audience’s hand from the very beginning, even though the plot’s predictability provides little room for confusion.

This is not to say that movies must be thought-provoking or wholly original to be entertaining, but this movie is neither of the above. With no twists or surprises, the film relies on the charm of its central couple to keep audiences invested. And yet, the primary romance is never endearing enough to make viewers swoon.

Liam is the only character allowed multiple dimensions — and even with them, he isn’t likable. His arc to redemption is effortless and undeserved. Josie, the character who should be the hardest to elicit forgiveness from, accepts him back into her life almost immediately.

This lack of sympathy the film has for characters other than Liam plagues the story from the very beginning. The event that brings Liam back to town in the first place is the funeral of his best friend and almost–best man. This death is forgotten immediately, and the effect it has on Liam, Josie and the community as a whole isn’t explored past a few lines of dialogue.

The film takes no time to develop any relationship besides the primary couple’s — and even then, the story offers Josie the bare minimum of dimension. With no exploration of the main characters’ lives outside of each other, viewers are given no reason to invest in their relationship. The lack of development of Josie’s character leaves the chief dynamic feeling flat and manufactured. The film only treats the couple’s overzealous child as a catalyst for the central couple to interact and depends on her for comic relief entirely too much.

The film’s virtues are its actors’ performances and its soundtrack. Roe, a British actor, embodies the all-American country heartthrob perfectly — which results in his career feeling more significant than his romance. Roe is a talented singer, and his musical performances of the film’s original songs feel genuine.

However realistic Liam’s character feels, the way the film deals with contemporary celebrity comes off as tone-deaf. Characters who work within the entertainment world are treated as solely antagonistic until they can prove their loyalty to the film’s heart of Southern country values. The film plays up negative stereotypes of Hollywood greed and corruption through both Liam’s publicist and, to a lesser extent, his manager.

Romance movies that stick to a familiar model still have the potential to be entertaining and enjoyable. “Forever My Girl” desperately wants to join the club of heartwarming, albeit unremarkable, love stories a la “Country Strong” and “Hope Floats” that audiences can rewatch for years, and at some points, it feels like a contender. But even those films offer at least one surprise or adjustment to the formula, and by not doing so, “Forever My Girl” becomes forgettable.

Review: Stereotypical romantic comedy lacks a heart and a brain