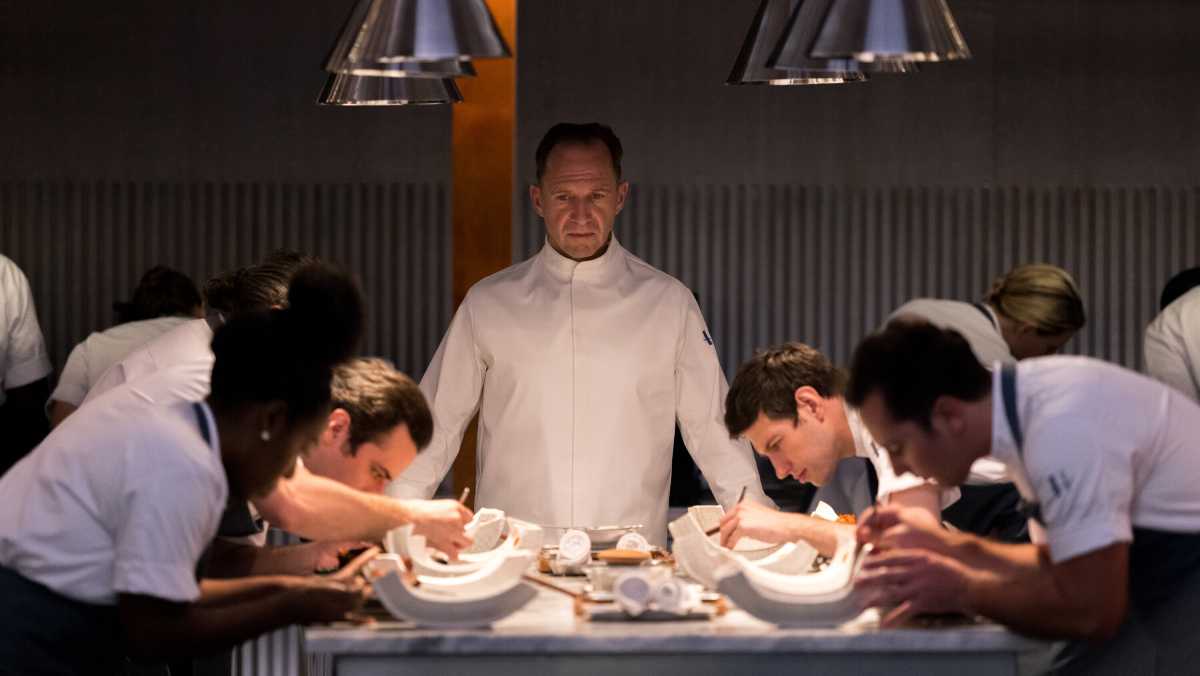 Courtesy of Searchlight Pictures
Chef Julian Slowik (Ralph Fiennes) watches as his devious menu is prepared for the unsuspecting guests in "The Menu."
By Patrick Mazzella — Staff Writer
Published: November 29, 2022

Painstakingly executed and… almost perfectly presented, Mark Mylod’s new film “The Menu” is a searing, biting and cutting satire on foodie culture, the rich and the sacrifices people make for art.

Starring Ralph Fiennes, Anya Taylor-Joy, Nicholas Hoult and Hong Chau, “The Menu” follows Margot Mills (Taylor-Joy), who is tagging alongside Tyler (Hoult) to an all-inclusive dining experience with only 10 other guests on a remote island restaurant called Hawthorne. Chef Julian Slowik (Fiennes) and his assistant Elsa (Chau) are known for their careful preparation, exquisite food and high prices. His latest effort is a constantly changing menu at Hawthorne, always prepared fresh and in house, for all the guests to see. However, the film doesn’t follow a normal night at Hawthorne.

Chef Slowik has gathered only the richest, most powerful and most obnoxious cast of characters to dine on this special night at Hawthorne. The ensemble includes a number of great characters including a once-famous movie star (John Leguizamo), a finance bro going out for his birthday (Rob Yang), an anxious regular of Hawthorne (Reed Birney), and the food critic that put Slowik on the map (Janet McTeer). The entire ensemble performs their roles quite well, each making their own impact on Slowik’s culinary magnum opus to be served only to the most deserving of guests.

Writers Seth Reiss and Will Tracy take full advantage of their premise, one that is ripe for twists and turns. The film is full of beautifully prepared dishes, tasteful performances and shocking moments that the audience will not see coming, but that is not the meat of the story. The film focuses most on Margot’s developing relationship with Chef Slowik, as he realizes she is not the woman who was supposed to accompany Tyler to Hawthorne. And this is by far the most interesting part of the film. Chef Slowik and Margot’s relationship, as it develops, has an almost sinister mentor-mentee feel to it. Chef Slowik certainly believes Margot is not like the rest of the customers and wishes to assure that she truly is different from the guests dining on this particular night.

A majority of the scenes keep the emotion of the characters at arm’s length, and although the audience may hear their screams at the misfortune brought upon them, they will never become very invested in the characters’ plight. The tension that Mylod, Reiss and Tracy attempt to create is never quite as successful as desired. It is, admittedly, hard to balance 14 characters and a high-concept plot and make any of them mean anything to an audience, but without a connection to the poor unfortunate souls in Hawthorne’s dining room, there just is not much else to care about. The tension of the film rests on audiences being scared of Slowik. And despite the fact that Chef Slowik’s antics are, in theory, menacing, there aren’t many moments that audiences will be afraid of what will happen next. The intrigue of what Slowik’s plan might be far outweighs any of the actual terrors audiences endure while watching, making for a film audiences might not want to turn off, but still don’t care much for. One remedy Mylod attempts and is often most successful with are the one-on-one scenes between Chef Slowik and Margot. These scenes are a relief from the mostly tedious wide shots of the customers freaking out at the various torture techniques Slowik is putting them through.

While Fiennes and Taylor-Joy are very generous leads, Hong Chau is the stand-out of the film. Her cold, calculated performance as the front-facing staff member of Hawthorne is certainly the most interesting to watch as she slowly reveals her own personal intentions throughout the film. Each performance has layers to peel back like an onion, but Chau hides her character’s desires and feelings until the exact right moment for her to strike, and the climax to her arc is certainly something to feast one’s eyes on.

Chef Slowik’s menu of disaster unfolds itself in a way that is wholly exciting to watch, but much of the minuscule amount of tension of the film feels spoiled by the advertising that felt nearly inescapable prior to its release. While that far but ruins the film, it’s best to go into it without spoiling your appetite.