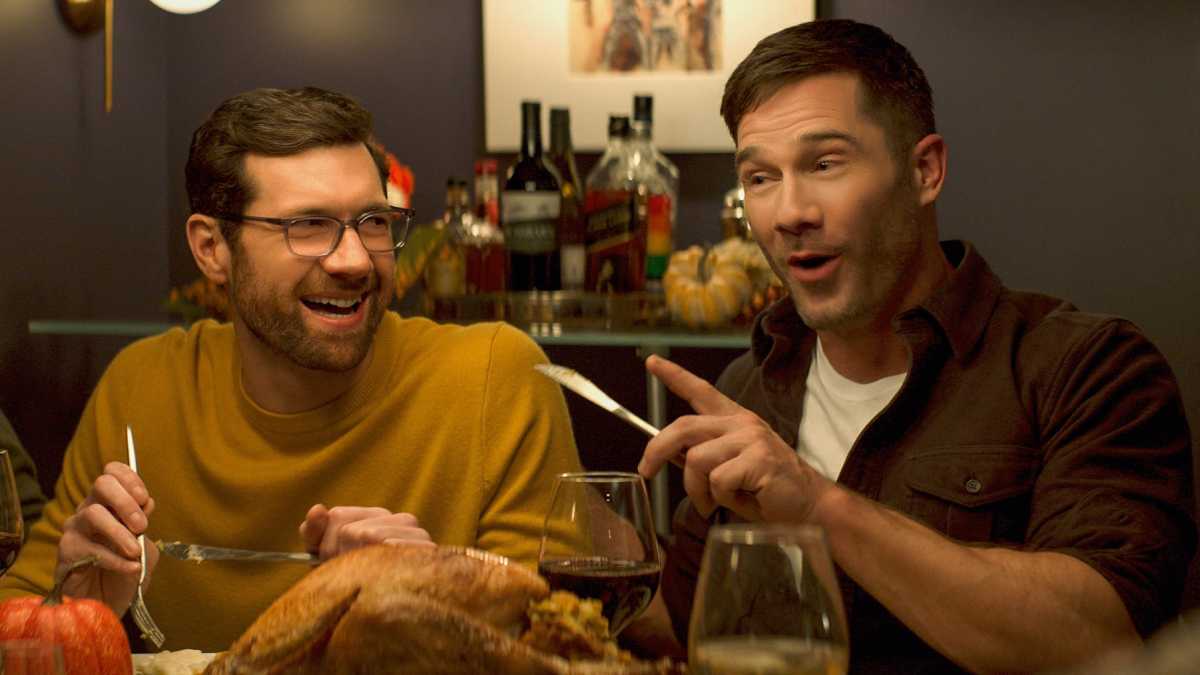 Courtesy of Universal Pictures
From left, Bobby (Billy Eichner) and Aaron (Luke Macfarlane) find a connection despite both of them having serious commitment issues.
By Matt Minton — Co Life and Culture Editor
Published: October 9, 2022

The era of the mid-budget studio rom-com that once populated movie screens has largely dissipated from the mainstream. However, 2022 has turned a new tide with releases like “The Lost City,” “Fire Island” and now “Bros” breathing life back into the genre. Taking a page from classics like “When Harry Met Sally…” and “Moonstruck,” Billy Eichner’s passion project is a testament to the staying power of a feel-good rom-com and a beautiful celebration of queer love.

Eichner, mostly known for his hilarious Emmy-nominated game show “Billy on the Street,” writes, produces and stars in the new film from “Forgetting Sarah Marshall” and “Neighbors” director Nicholas Stoller. “Bros” follows the relationship formed between Bobby (Eichner), a podcast host who has recently accepted a job at an LGBTQ+ museum, and Aaron (Luke Macfarlane), a lawyer who hates his job. Both men have trouble committing to relationships but find themselves drawn to each other despite their own insecurities.

The strongest aspect of “Bros” is the brilliant comedy, with a truly hilarious script that gives the cast many moments to shine. Stoller and Eichner, who co-wrote the script together, perfectly use pop culture references and real-life circumstances that are tailored specifically toward queer audiences. Whether it be a scene featuring Bobby and Aaron messaging on Grindr or the board of the LGBTQ+ museum discussing what the final exhibit should represent, “Bros” is made for and by the LGBTQ+ community, fostering a sense of authenticity that would have been otherwise lost.

Eichner shows off his acting chops and proves that he is a worthy leading man, bringing to life a character that is refreshingly self-aware yet feels that he is not physically attractive enough for Aaron. While Macfarlane, who is mostly known for doing cheesy Christmas movies like Netflix’s “Single All the Way” and Hallmark’s “The Mistletoe Promise,” is not nearly up to par, he does a fine enough job in bringing Aaron to life. The dynamic between the two characters is well-written as Bobby is much more outspoken and open about his personality but is less confident in his appearance, whereas Aaron is more closed off but feels more confident in his physicality. This provides room for growth, with the two characters closing the space between each other and learning to be vulnerable. In one of the film’s best scenes, Bobby opens up to Aaron about finding his success too late in life for his parents to witness it.

These core differences between the two lovers is also where the film is able to explore some deeper themes about toxic masculinity, particularly among gay men. In one of the funniest and ultimately most heartfelt scenes, Bobby and Aaron lie down together at a park. In a challenge, Bobby starts playfully attacking Aaron, and the two get into a fight before they start making out. This dynamic between the two characters is humorous and allows the story to explore ideas about falling into heteronormativity. Bobby initially feels that he has to put on a hypermasculine act for Aaron before eventually realizing that he is worthy of being loved just as he is.

“Bros” tends to follow the typical formula that audiences have come to expect with rom-coms. At times, this choice is to a fault, losing some of the nuances of the characters by making solutions appear in the film too easily. Additionally, the balance between comedy and drama is a bit abrupt. While the film is very funny, Eichner and Stoller’s script would have been even stronger if it had transitioned to some of the dramatic moments smoother. This would have also cut down the film’s runtime, which runs just a tad too long at 115 minutes.

Despite how enjoyable the film is, its opening weekend box office receipts indicate that “Bros” is flopping. Hopefully, studios do not take the wrong message from its poor performance and continue to greenlight more LGBTQ+-led projects in the future. While the film is far from perfect, Eichner and Stoller have a lot to be proud of here.