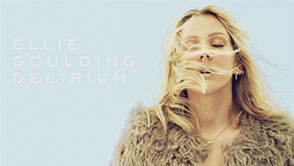 If every track on Ellie Goulding’s latest release “Delirium” was as atmospheric, groovy or energetic as the album’s first five minutes, it would have been great. But the synth–pop singer’s third studio album quickly falls apart, unable to support itself on a bare framework of empty lyrics and over-produced sound.

The album’s banal lyrics are derivative and uninspired, such as in the hackneyed “Something In the Way You Move,” where Goulding sings, “Tonight I’m gonna lose it all / Playing with fire, I was the first to fall.”

The feverish excitement conjured by the title “Delirium” is only recalled in select songs like the excellent opener “Aftertaste,” which boasts a triumphant synthetic beat, and “Keep on Dancin’” that despite its accompaniment sounding like a Jason Derulo song, manages to build on the pop style that made Goulding famous with such hits as 2011’s “Lights” and 2012’s “Burn.”

By the time the album reaches “Love Me Like You Do,” the “Fifty Shades of Grey” song whose pounding drum work masks its cliched lyrics, the “delirious” mysticism of the album is gone. The pitch becomes noticeably high and close to unbearable. The songs’ messages are lost, adrift in a sea of over-polished tunes and hollow words.

Goulding’s latest is for a youth hungry for energized dance songs — one that doesn’t care for intelligent, poetic lyrics or memorable messages. It’s this adaptation to the mainstream pop scene that disappoints in “Delirium,” this determination to sink the songs with repetitive lyrics and bland instrumentations. Nothing here is memorable.

The exceptions are the aforementioned “Aftertaste,” the hyperactive dance song “We Can’t Move To This” and the inspired track “Army,” a song that showcases a more vulnerable side to Goulding’s typically over-autotuned vocals. The lyrics are more interesting, poetic and full than they’d ever been on the album.

These are just the exceptions in “Delirium.” Much like the rest of the pop music crop, the remainder of “Delirium” feels like the same song being played over and over and over again. It’s the same empty song that’s been plopped 14 times onto the rickety carousel of a pop album.