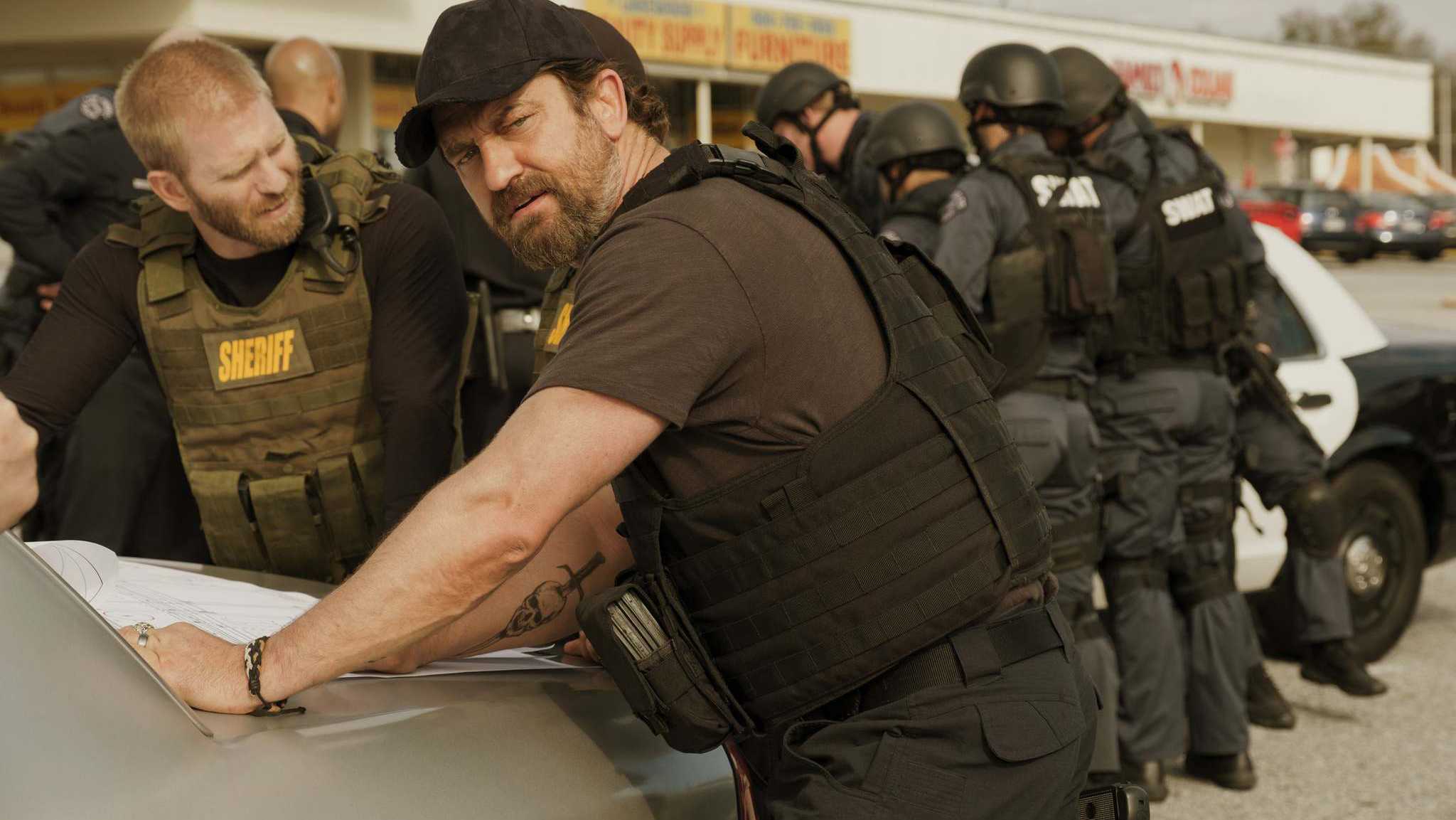 Guns blaze. Burly men scream at each other from across a stretch of highway as civilians scramble out of the way. But the armed men don’t care about the innocents. They’re here for one another — to prove who’s the better man, who’s got the best guns and who’s the biggest badass around.

“Den of Thieves” delves into the battle between Ray Merriman’s (Pablo Schreiber) team of skilled thieves and “Big Nick” O’Brien’s (Gerard Butler) militarized police unit. Ray dreams of robbing the most secure bank in California — the Los Angeles Federal Reserve — and creates an intricate and violent plan to rob the impenetrable government building. On the other side of the law, Nick leads a special case unit that seems to exist outside the laws of reason and morality.

To director Christian Gudegast’s credit, the heist is a high-tension, well–constructed Rube Goldberg contraption. The viewer is always a few steps ahead of Ray’s scheme, but never so much so that they can figure out the outcome before it’s revealed. That said, the film is longer than it needs to be, and the first step of the heist — a drawn–out hostage scene set in an unrelated bank — is unnecessary and disconnected from the rest of the mission.

Movies entrenched in the heist genre like “Ocean’s 11” or, to a lesser extent, “Hell or High Water” survive as much by the quirks or complexities of their characters as by the intricacies of their heists. But there are no compelling characters in “Den of Thieves” — just musclebound meatheads engaged in man-offs with one another. Ray’s band of misfits and Nick’s crew of hardened cops are identical — they’re tattooed tough guys with competitive streaks. With the exception of the gang’s driver, Donnie (O’Shea Jackson Jr.), whose only notable trait is weakness, the rest of the robbers are motivated by a need to beat Nick and maybe earn a bit of cash while they’re at it.

In attempt to make Nick sympathetic, Gudegast sets the war between the battling groups against Nick’s divorce. There are moments when the brutish police officer breaks down, lamenting the loss of his wife and daughters. But instead of allowing the viewer to forgive Nick’s transgressions, these raw moments make his faults stand out more starkly than before — Nick expects sympathy without changing his monstrous ways. He’s an adulterer, a violent psychopath and a self–indulgent slob — the man chugs milk straight from the carton, for Pete’s sake. Nick is the villain of this movie, but he’s often portrayed as the hero; this dissonant depiction further muddies the convoluted good-bad dynamic in “Den of Thieves.” Who is the audience supposed to care about? Not the abusive police officer. Not the murderous gang leader. Then whom? Maybe Donnie, but his characterization is so thin the viewer can practically see straight through him.

The one respite from Gudegast’s uber–masculine fantasy is the mellow establishing shots scattered throughout the film. Most new settings are introduced with aerial shots that highlight the glittering beauty of Los Angeles. These moments are a chance to breathe, decompress and forget about the violence taking place below.

The gunplay in “Den of Thieves” is harsh, loud and dull. Gudegast cuts from static shots of Ray’s men firing big nondescript machine guns to similar static shots of Nick’s men firing big nondescript machine guns. Often, the viewer doesn’t know whom or what the characters are firing at until Gudegast quickly cuts to a spray of blood and a man collapsing to the ground. He’s more concerned with a fetishistic display of weaponry than he is with his characters. Major deaths are met with little more than a shrug, despite Gudegast’s feeble attempts to make the warring groups seem like rival families.

“Den of Thieves” is too serious to be enjoyable and too outlandish to be taken seriously. The film exists in the same action movie space as the “Fast and the Furious” franchise. But “Den of Thieves” lacks the goofy humor and tender heart that makes “Furious” tolerable. Instead, Gudegast’s bank robbery romp is as joyless and brainless as its thick-skulled characters.