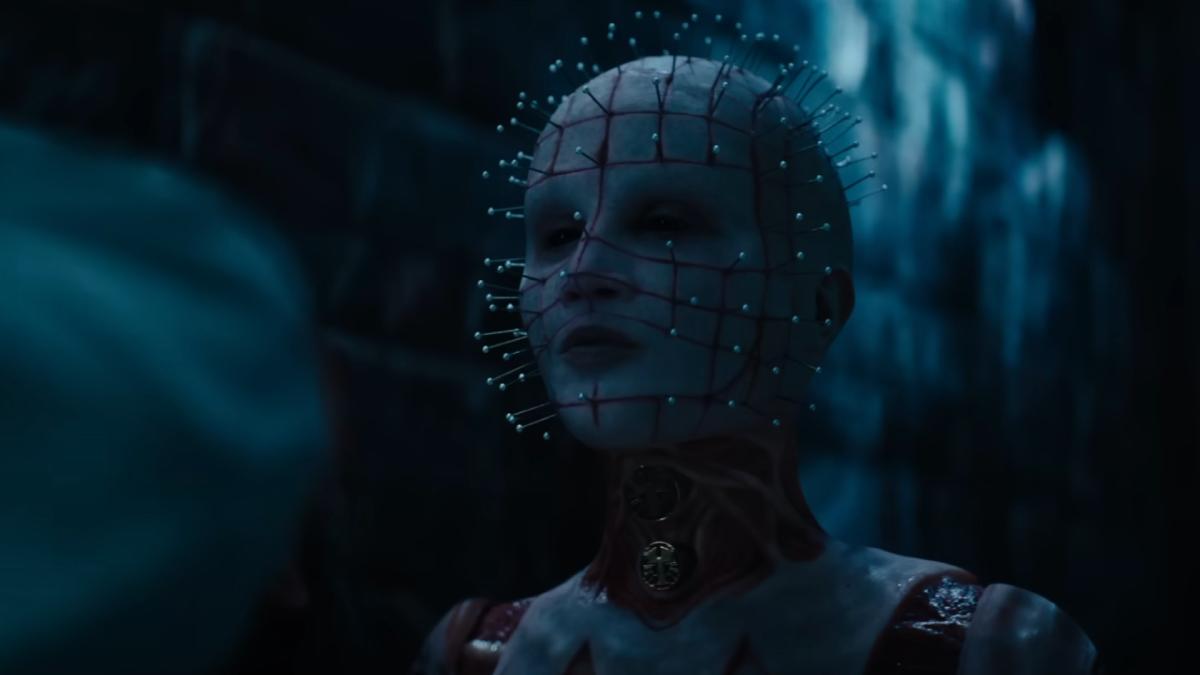 Courtesy of Hulu
Pinhead (Jamie Clayton) leads the Cenobites, a group of deformed humans, in this 2022 reboot of the classic horror franchise "Hellraiser."
By Evan Miller — Staff Writer
Published: October 19, 2022

“Hellraiser” is the latest classic horror film to be revived in 2022. It joins the ranks of “Scream” and “Prey” as a film that not only reinvigorates a classic franchise but stands on its own as a spectacular work of horror.

“Hellraiser” follows Riley (Odessa A’zion), a recovering addict living with her brother Matt (Brandon Flynn). When Riley and her boyfriend Trevor (Drew Starkey) attempt to loot an abandoned storage warehouse, they discover a mysterious puzzle box. When Riley begins interacting with it, she finds herself stalked by a group of deformed humans known as the Cenobites and their evil leader Pinhead (Jamie Clayton).

“Hellraiser” is the 11th film in the horror franchise that, in its later installments, had become nothing more than the butt of a joke between critics and fans. While this latest film is a complete reboot of the franchise, it retains all of the horrific themes and imagery that made the original 1987 film so iconic.

Just as they were in the original, the Cenobites and Pinhead are the greatest parts of “Hellraiser.” The use of practical effects like makeup and prosthetics by makeup effects artists Josh and Sierra Russell is incredibly disturbing and mindblowing. Their work, paired with Clayton’s imposing performance as the sadistic Hell Priest, creates grotesque imagery that feels as though it is directly stripped from a nightmare and thrown on-screen.

One of the most interesting parts of the “Hellraiser” franchise is its mythology and the rules that shape the puzzle box and Cenobites. The six different configurations of the puzzle box and the meanings behind each of them is a particularly fascinating element to see explored. The 2022 “Hellraiser” film honors these aspects well and provides fans of the franchise with interesting details to catch throughout the film.

An element of the film that did not always work was how exposition was relayed to the characters and the viewer. In multiple moments, the characters receive important information from sources like the internet or a journal that is inexplicably lying out in the open clearly to move the plot forward. As a result, the film did not always make it feel exciting to receive new bits of information. If handled in a more organic way, it could have felt much more intriguing.

Another element of the film that does not always work is its characters. The viewer often does not care whether the characters make it to the end of the film simply because most of them are not very likable. It is not until the film’s third act that some viewers may find themselves rooting for Riley, who up until a certain point, seems to only make poor decisions that negatively impact those around her.

Through the film’s relatively slow first act, the viewer constantly finds themselves wondering who they are supposed to root for while they wait for the Cenobites to start wreaking havoc.

However, once the film’s characters reach the location where the majority of the action takes place, their motivations begin to become much more clear and easy to get behind. From here, the film becomes a thrill ride that does not disappoint, especially once it reaches its disturbingly gory end.

“Hellraiser” is another terrifying breath of fresh air for the horror film genre that further cements 2022 as a year that will most certainly be highly regarded by horror fans when they look back upon it years in the future. While “Hellraiser” does not quite reinvent the wheel, it does provide viewers with a frighteningly disturbing good time that will likely remain engrained in their minds for quite some time.