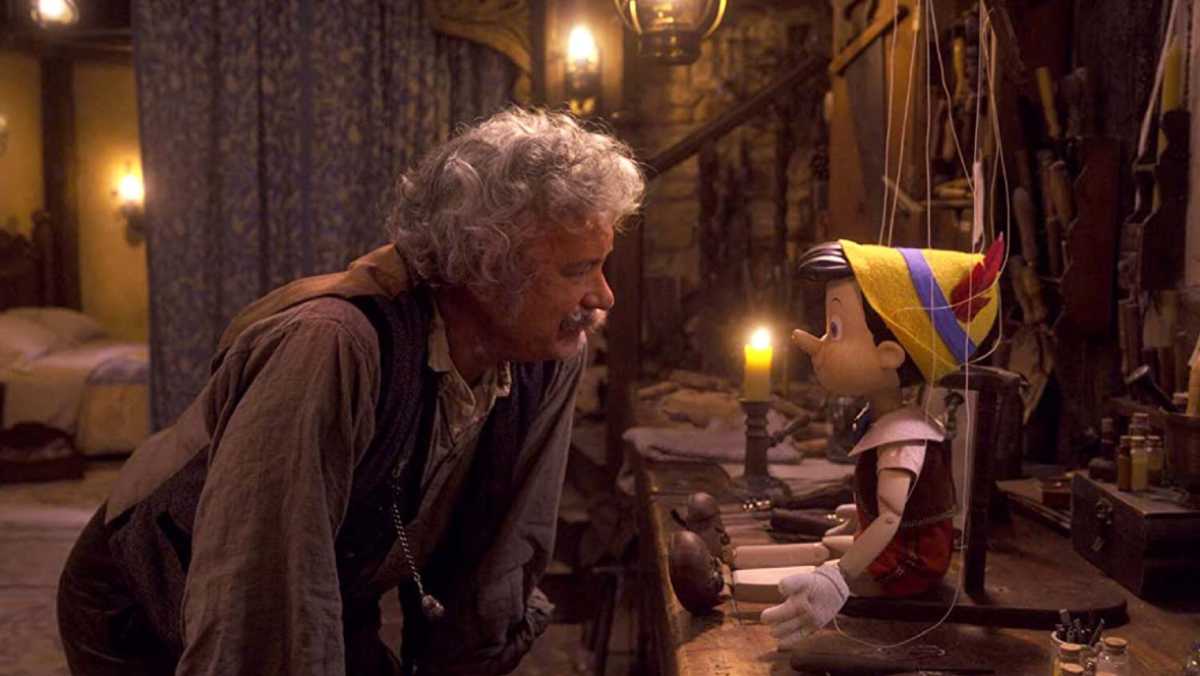 Courtesy of Disney
After wooden puppet Pinocchio (Benjamin Evan Ainsworth) is wished-to-life by his father Geppetto (Tom Hanks), he sets out to become a real boy.
By Sydney Brumfield — Senior Writer
Published: September 19, 2022

Viewers are transported back to one of the oldest Disney narratives in the latest adaptation of “Pinocchio.” Directed by Robert Zemeckis, this fresh take on the classic boy-meets-wood story successfully utilizes the new technologies available to it in the filmmaking process but offers audiences nothing new on the narrative front.

A familiar story to many, “Pinocchio” begins after wooden puppet Pinocchio (Benjamin Evan Ainsworth) is wished-to-life by his father Geppetto (Tom Hanks). Upon gaining consciousness, Pinocchio’s unwavering goal is to become a real boy. Pinocchio will endure the adventure of a lifetime as he navigates being kidnapped, nearly turned into a donkey and swallowed by a sea monster.

One of the strongest elements of this latest adaptation is the animation. “Pinocchio” highlights how Disney continues to master their style of live action animation — when filmmakers combine live actors with animated techniques —  especially when it comes to animals as shown in “The Lion King” (2019) and “The Jungle Book” (2016). Two animalistic characters that are especially well made are Honest John (Keegan-Michael Key) and Gideon. Honest John, a fox con-man of sorts, is exceptionally realistic as his facial features and fur are well animated with intense texture. His animation perfectly walks the line between classical cartoon emoting and realistic, animalistic expressions.

With great depth and fast transitions, the shots and editing of the film engage well with viewers. Unlike the original “Pinocchio” (1940), which maintained a very static, unaltering view of the characters and conflict, “Pinocchio” (2022) utlizes modern camera techniques and cuts to enhance the story. For instance, whenever Pinocchio endures a motion-heavy portion of the plot, the camera stays right along with him to immerse the audience as much in this world as possible.

Despite having an incredibly talented cast composed of Tom Hanks, Joseph Gordon-Levitt, Sheila Atim, Lorraine Bracco, Luke Evans, Keegan-Michael Key and Cynthia Erivo, the acting is pretty lackluster. It is apparent that the actors had fun in their respective roles with some of their performances radiating so much joy — like Cynthia Erivo as the Blue Fairy — but none of them are exceptional. In fact, some of the casting is a little distracting, like casting Luke Evans, who is known for playing Gaston in “Beauty and the Beast” (2017), in the role of the Coachman.

Despite “Pinocchio” being made eighty-two years after Disney’s initial attempt at the adaptation, they did nothing to spice up the narrative. Doing a new adaptation of a work is a great opportunity to improve the quality of the original story, especially when it comes to Pinocchio, which can definitely be improved upon. Many viewers who are familiar with “Pinocchio” (1940) are no stranger to the nightmare fuel that is the donkey metamorphosis scene. For those who were lucky enough to never be scarred by “Pinocchio” (1940), Pinocchio, along with a hoard of small children, get kidnapped and are graphically turned into mules before being sold for a profit. “Pinocchio” (2022) had the ability to do something creative and outside the box with this story; instead, they resort to utilizing the same terrifying plot point hinting at the buying and selling of children on the black market.

“Pinocchio” is a simple and sometimes heavy-handed tale that educates viewers on the importance of morals, listening to your parents and always doing what is right. It is extremely disappointing that nothing fun or interesting was done narratively, but as audiences should know by now, thinking outside the box when it comes to children’s programs is far too big of a risk for Disney — much safer that they just stick to half-mule, half-human children.