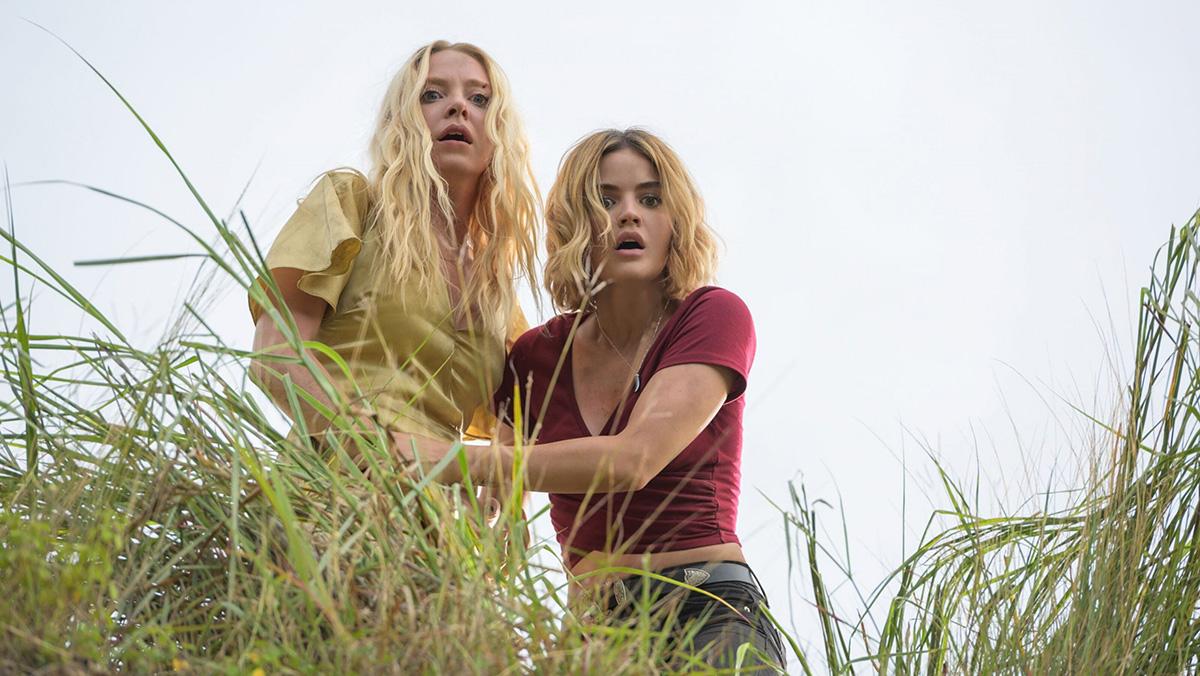 Courtesy of Blumhouse Productions
The reboot of “Fantasy Island” is a thrill-free romp through conventional horror tropes. This bland product is most likely the result of the film's low budget.
By Thomas Machacz
Published: February 25, 2020

Even before “Fantasy Island” begins, the movie is trying to scare you. The Columbia Pictures logo is accompanied by a melodramatic score and the echoes of an elevator door opening. This proves to be the movie’s most effective scare tactic, as it only gets more disappointing from there. Released by the prolific Blumhouse Productions, “Fantasy Island” is another heartless product filled with unlikable characters, tensionless action and a convoluted plot.

Blumhouse Productions is a curious company. Built on a production model of low budgets and generous creative freedom for its directors, the company has been behind some of the biggest movies in recent memory. Its releases range from ultra-cheap horror blockbusters like the “Paranormal Activity” series to Oscar winners like “Get Out” and “BlacKkKlansman,” which had the largest budget of the three. Its latest release, “Fantasy Island,” falls firmly into the former category. Directed by Jeff Wadlow — the man behind 2018’s “Truth or Dare” — “Fantasy Island” severely lacks the creative vision of Blumhouse’s best products.

The original “Fantasy Island” was a charming, goofy television series that aired 1977–84. The series followed the dashingly mysterious Mr. Roarke and his sidekick, Tattoo, as they granted high-paying customers the ability to live out their fantasies. These fantasies rarely played out as expected, and each episode concluded with a lesson about love, friendship or the power of kindness. The 2020 quasi-reboot keeps the classic premise but replaces the series’ moralizing lessons with psychological manipulation and nonstop violence.

The visitors to the titular island include Melanie (Lucy Hale), a shady college graduate with hidden anger; Gwen (Maggie Q), a regretful divorcee; and Patrick (Austin Stowell), a former police officer. As the movie showcases the various fantasies of its ensemble cast, it is clear that these characters are nothing more than their brief descriptions. As is tradition for cheap horror movies, the characters lack common sense and are limited to their stereotypical function in the story. Add a couple of obnoxious supporting characters loaded with forced and outdated jokes, and the movie becomes unwatchable. Even Michael Peña, a talented actor whose performances elevated “Ant-Man” and “End of Watch,” struggles to find any mystery or depth in the movie’s vaguely menacing version of Mr. Roarke.

So even if the characters do not feel real or interesting, the madness of the fantasies have the potential to be entertaining. Regrettably, the limited budget, a meager $7 million, is most obvious here. Despite the island’s picturesque jungle, every interior location in the film looks temporary and bland, similar to a cheap amusement park ride. Even the violence is sanitized and largely bloodless, most likely to adhere to the more profitable PG-13 rating. With such obvious limitations in production, every danger feels riskless and rehearsed. If the audience sees no consequences for the characters’ actions, why should it have any concern for their survival at the end of the story?

If there is one saving grace for “Fantasy Island,” it is its last-minute twist. Quite literally in the final moments of the movie, the secret identity of one of the Fantasy Island visitors is revealed. Given the total lack of foreshadowing in the rest of the movie, the reveal makes absolutely no sense. And yet the sheer hubris of introducing such a bizarre twist in the movie’s last seconds is actually rather admirable. It possesses a manic energy that could have elevated this movie from a lifeless slog to a campy treat.

“Fantasy Island” is a horror movie only in concept. None of it is actually frightening, but a horror movie does not need to provide genuine scares to be entertaining. Unfortunately for this movie, its by-the-numbers plot is a challenge to enjoy even ironically. Each character’s arc is immediately obvious, save for the out-of-nowhere twist. The filmmakers play it safe at every corner, diving headfirst into every known horror movie trope with no self-awareness or style. The freewheeling insanity of a horror movie’s plot makes for a thrilling experience. Here, there are no thrills — only a stale product devoid of character and sincerity.

Yet in just one weekend, “Fantasy Island” has already made more than its budget back at the box office. That is the Blumhouse business model at work, and looking at the company’s four additional releases scheduled for 2020, it is not stopping any time soon.