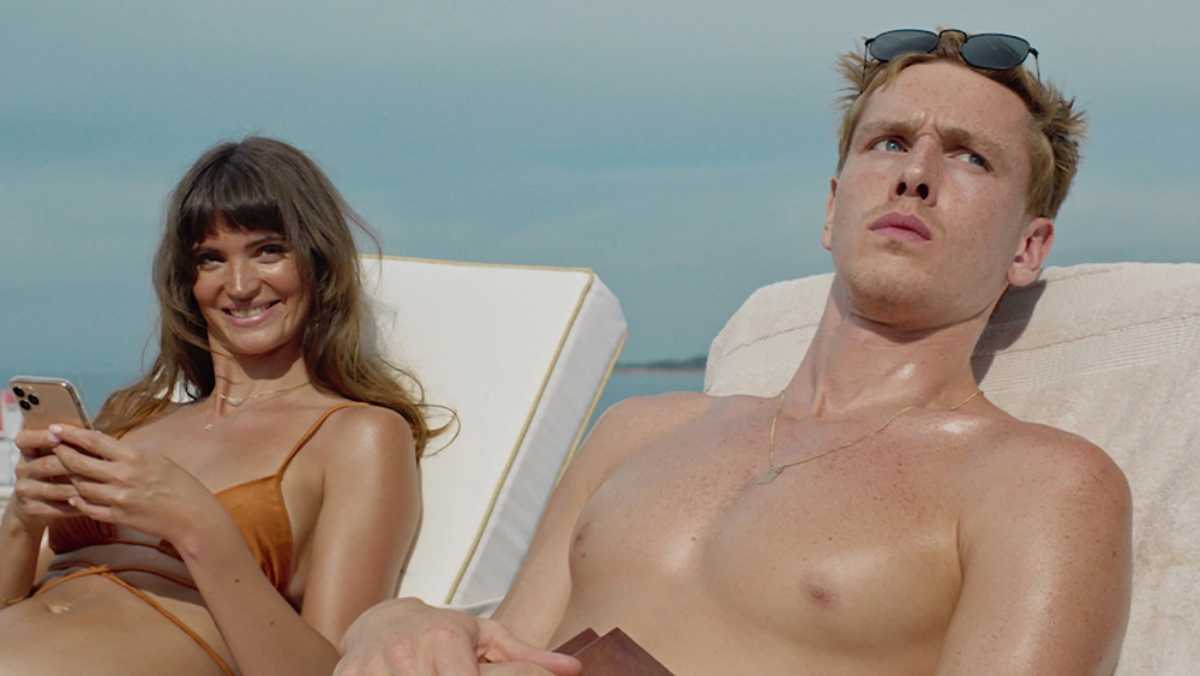 “It’s not about the money,” or so the characters of Ruben Östlund’s newest satire film say to themselves. But audience members know right from the beginning that this could not be further from the truth. With a sharply written and truly brilliant execution of dark comedy, Östlund allows the audience to be in on the joke against the elite before his script rears its head and forces his characters to see who they truly are.

“Triangle of Sadness,” the 2022 winner of the highly prestigious Palme d’Or at the Cannes Film Festival, follows a group of rich people as they take a luxury cruise. Divided into three parts, the opening introduces audiences to a deceptively perfect couple before they are invited onto the trip: clothing model Carl (Harris Dickinson) and social media influencer Yaya (Charlbi Dean Kriek). While all initially seems normal in a rich man’s world, the voyage quickly takes a turn as antics ensue (and lots of people vomit frantically), leading the passengers to be stranded on an island.

Östlund is no stranger to satire movies critiquing classism. His last film, “The Square” (2017), was a scathing commentary of the elitism present in the art world and was also a recipient of the Palme. However, “Triangle of Sadness” is easily his standout work so far in his filmography. While the film does have moments where scenes go on for too long, particularly in the third act, Östlund’s script is cleverly bleak with too many laugh-out-loud moments to count. The jokes are clearly designed to critique the rich, portraying their strange and random requests. For example, in one of the funniest scenes, a passenger insists on the ship’s sail being cleaned, despite the ship not having a sail to even begin with. The characters’ inability to think about anyone but themselves is revealed through the witty dialogue, but the script is never too on-the-nose so as to lessen the impact.

The entire ensemble cast works brilliantly together, with everybody having standout moments. The most memorable character might just be Abigail (Dolly De Leon), who steals the movie in the third act. Early on, the script sets up how the luxurious passengers look down and scoff at Abigail when she tries to clean their room, much like they do at all of the cleaning people on the ship. This detail comes full circle once the passengers must rely on Abigail’s skills to survive on the island, brilliantly turning the previously established social hierarchy of the ship on its head. This is one of the many ways in which Östlund subverts the audience’s expectations throughout the film: not merely just for the sake of shocking the audience, but in entertaining and adding to the commentary.

One of the most effective scenes of the entire film comes right in the middle when things start to go wrong for the seemingly perfect passengers. The exceptional cinematography captures the boat at an uncomfortably tilted angle as the characters start to feel seasick in a storm, throwing up everywhere and having to sit with who they truly are. This scene is outrageously funny, but doesn’t vere too far into being shock value for shock value’s sake due to how well the script builds up to this pivotal moment. A lesser comedy would have gone too far in gross humor, but Östlund strikes a delicate, rare balance.

In recent years, themes of capitalism and class have been present in many films. After some time, viewers may start to wonder if there is anything new that can be said about this topic. “Triangle of Sadness” proves, in shocking fashion, that there always will be.