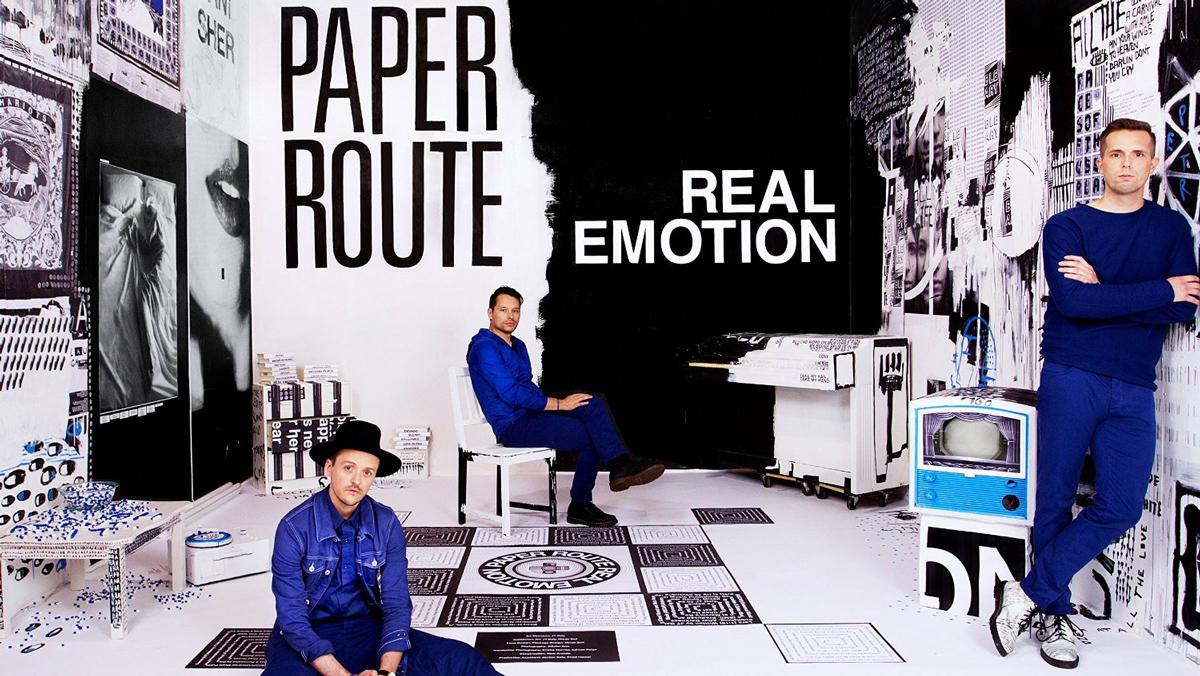 It’s not always easy being a band from one of the music capitals of the United States — Nashville, Tennessee — but the indie rock group Paper Route is making the best of it. With each release, the band has climbed the Billboard Heatseekers charts: The group’s debut, “Absence,” peaked at 13, and its sophomore effort at eight. The group’s music has been featured in movies and shows like “One Tree Hill,” “(500) Days of Summer,” “The Vampire Diaries,” “Teen Wolf” and “CSI: NY.” It has toured with Paramore, Jack’s Mannequin, Owl City, Passion Pit, Switchfoot and Imagine Dragons. The band’s third album, and 16-track debut on Kemosabe Records, “Real Emotion” — out Sept. 23 — is Paper Route’s best offering yet.

Paper Route tries not to stay in one place too long on this album, jumping from sweet, slow songs (“Untitled”) to ambient, electronic instrumentals (“Blue Collar Daydream”) to more energetic, alternative jams (“Laugh About It”). The album begins with “Intro,” where a female chorus sings, “Profess your love/ ’Cause a storm is bound to come/ Borrow hope to understand/ Take my hand, take my hand,” before the voices echo into oblivion.

“Pretend” is catchy with a cascade of sounds and shuffle beat that invokes dancing. Lead singer, JT Daly, belts his heart out with, “I play my favorite songs when I’m driving you home/ You let your hair fall down when you know we’re alone/ It’s such a careful dance when your feet have been cold.” From here, the song only gets better.

“Chariots” has a more industrial sound, which fills the room with heavy reverb on the vocals as if it were recorded in a tunnel. “Untitled” is a beautiful mess, rotating between deserted, echoing vocals over light, twinkling instrumentals and whirlwinds of electronics bustling into the next track.

The heart of the album is the title track, “Real Emotion.” The song discusses a band member’s struggle of having to be on medication to be perceived as his “best self” in society. “For every crooked line, there is a chemical/ With every pill I take, they try to make me whole/ I’m down to what I’ve sung, behind the history/ I try and drink it down, but it’s a part of me,” Daly longingly coos. Many listeners with mental illness can relate to Daly’s frustration of wanting to own his feelings despite social expectations and stigmas.

Themes of mental illness continue throughout the album, particularly in the second verse of “Laugh About It”: “Anxious the doc has got me drugged up/ She says I’m not a screw-up/ I’m just anxious.” The crisp guitar riffs, shimmering tambourine and strolling bass are a bit misleading compared to the lyrics, but they make for a great change of pace and one of the best songs on the album.

Another is “Zhivago,” the album’s first single, which starts off slowly with a steady drum beat, misty riffs and a shallow, looping vocal track that eventually leads to a colorful, full sound, complete with patterns of vocal samples. The song — along with the one before it, titled “Lara” — is a reference to Boris Pasternak’s novel “Doctor Zhivago,” which has had many film and book adaptations, all of which involve Russian physician Yuri Zhivago and his love and loss throughout times of revolution and war.

“Vanisher” rounds off the album with a gorgeous, soothing, sad tune. Daly’s voice weaves in and out of carefully plucked guitar strings painting gentle raindrops. Instruments are added, but the picture and message remain the same.

“Real Emotion” is refreshing during a time when many albums prove difficult to listen to in their entirety due to repetition of themes, sounds and just general monotony. Paper Route changes things up throughout its latest release with textured sounds, changes in vocals, shifts in tempo and emotional exploration. From start to finish, “Real Emotion” is a complete body of work, not simply a catalog to pick singles from.