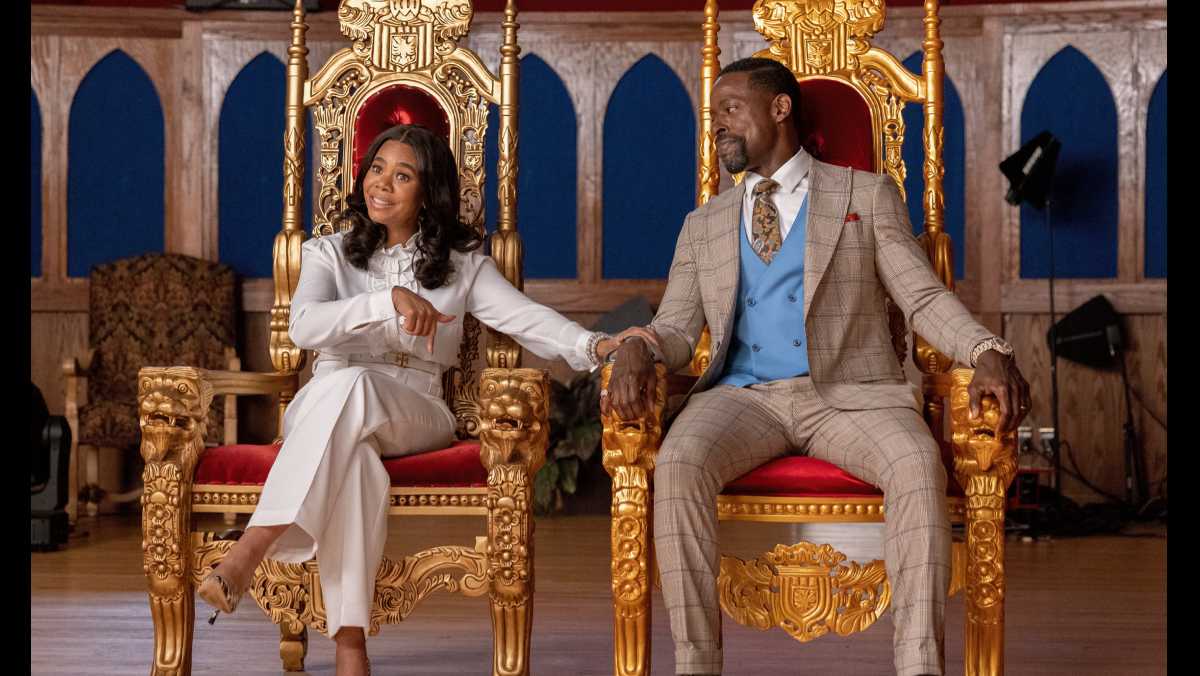 Courtesy of Focus Features
From left, Regina Hall and Sterling K. Brown portray a televangelist and his first lady as they try to rebuild their church following a scandal.
By Sydney Brumfield — Senior Writer
Published: September 14, 2022

Honk for Jesus. Save Your Soul.

“Jesus Christ was all about the shock factor,” Trinitie Childs (Regina Hall) said, and so is Adamme Ebo’s latest dramady, “Honk for Jesus. Save Your Soul.” This mockumentary styled film ambitiously attempts to shed light on the hypocrisies within the Christian Community as well as entertain viewers through dark comedy.

“Honk for Jesus. Save your Soul.” follows televangelist Pastor Lee-Curtis Childs (Sterling K. Brown) and his First Lady Trinitie Childs as they work to bring the congregation back to their Southern Baptist megachurch after a scandal forces them to close. The film picks up as Lee-Curtis hires a documentary team to capture him and his wife’s glorious return to the public. Unfortunately for the Childs, the documentary team will capture every fracture and imperfection that occurs as they try to bury their scandal and open their congregation by Easter.

“Honk for Jesus. Save your Soul.” is first-rate commentary on the immense misappropriation of wealth that occurs within Christianity, specifically as it pertains to how the Childs are able to afford their excessive lifestyle. Ebo demonstrates this visually with the sheer scale of all the different congregations’ places of worship in this southern community. The Childs’ church for instance, “Wander to Greater Paths,” is colossal, complete with multiple dance studios, exquisite basketball courts and state-of-the-art audio visual capabilities for their sermons. Their primary competitor’s church, “Heaven’s House,” is just as gaudy and colossal, as every time the Child’s visit the organization they discuss their latest expansion. In addition to their place of business, the childs’ themselves are luxuriously lavished in comedically extravagant name-brand materials like Prada, Gucci and Armand.

The narrative structure of “Honk for Jesus. Save your Soul.” is erudite as it utilizes editing to allow the plot to unravel naturally before viewers. This is especially prominent in the beginning of the film. There are brief mentions of the Childs’ needing to build themselves back from a “set back” or “problem” without the characters explicitly laying out the details of the scandal which took place before the events of the film. Despite this, viewers are never confused or out of the loop and are still hooked and waiting to see what becomes of the Childs.

Ebo does a terrific job at making audience members care for the flawed characters of Lee-Curtis and Trinitie. Collectively they abuse donated funds, attempt to cover up Lee-Curtis’ scandal and care little for how their actions impact others. It is abundantly clear that they are not good people — despite allegedly being the holiest. Even with their tragic flaws, their caricatured personalities, obscureness and over-the-top nature make viewers laugh out loud.

This satirical effect would not have been possible without the talents of Sterling K. Brown and Regina Hall who truly breathe life into these satirical characters. Brown skillfully captures the intricacies of being a walking contradiction in the world of religion as well as the dangers and disgusts that accompany men in high statues in the world of organized religion. Hall successfully captures the inner turmoil and isolation that accompanies supporting a partner until the bitter end for better or for worse. Hall’s performance is exceptionally noteworthy as she garners both the biggest laughs and heart wrenching emotions from viewers.

Where “Honk for Jesus. Save Your Soul.” falls short is in its delivery and its tone. The film starts off strong with a deliberate and clear vision in the world of mockumentary commentary. Unfortunately, about halfway through, the elements of comedy vanish and the film ends feeling and looking more like a drama. This can be exceptionally jarring to viewers and makes the elements of satire at the end incredibly hard to distinguish, thus blurring Ebo’s at one point clear critique.

“Honk for Jesus. Save Your Soul.” is an in-depth look into the world of religious contradictions and just how fragile of a rock the house of God in the United States is built on. Had it not been for key tone shifts and inconsistencies that occur throughout the third act, this could have been a perfect film.