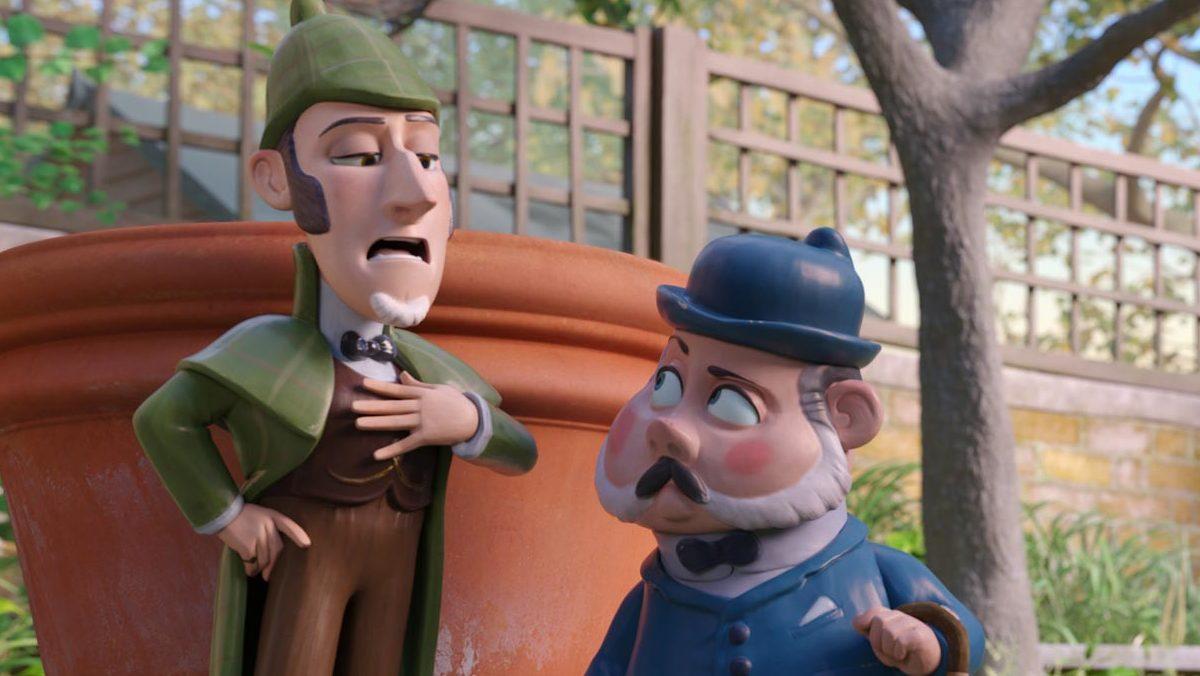 Who is the audience for “Sherlock Gnomes”? The film isn’t for adults, who have seen better cartoon riffs of classic characters. But it’s not for kids either, who will be bored by director John Stevenson’s obsession with outdated pop culture references.

The film is a follow up of the 2011 film “Gnomeo and Juliet” and continues the story of the titular couple. Gnomeo (James McAvoy) and Juliet (Emily Blunt) move to a new garden and are tasked with protecting their gnome friends, but the newfound responsibility causes a rift in their relationship. But before they can repair the damaged marriage, their friends and family are kidnapped by Moriarty (Jamie Demetriou), a bakery mascot gone bad. Sherlock Gnomes (Johnny Depp) and his underappreciated assistant, Dr. Watson (Chiwetel Ejiofor), arrive to solve the crime and save the gnomes.

Despite the dynamic locations — an Asian city hidden in a Chinese restaurant, a secret, seedy gnome nightclub and a hidden chamber in Tower Bridge — “Sherlock Gnomes” lacks variety. The action scenes are simple and repetitive, composed of several humorless, joyless chase sequences. Sherlock and Juliet sprint from the racially reductive Chinatown, run from the vicious Hound of the Baskervilles and try to outmaneuver a pair of dopey gargoyles. Each set piece lacks energy and tension, making the film feel poorly paced and overlong, even at its sub–90–minute runtime.

There’s no drive to the film. Even when the final twist is revealed and Moriarty’s plan is explained in full, it seems both cliched and arbitrary. Moriarty exists to challenge Sherlock, and Sherlock exists to stop Moriarty; it’s well-trodden ground, and “Sherlock Gnomes” doesn’t offer a fresh or funny take on their rivalry.

But where the relationship between Sherlock and Moriarty falters, the bond between Sherlock and Watson thrives. The brunt of the plot focuses on Sherlock’s self-aggrandizing arrogance and his neglect of Watson — a dynamic that is mirrored by Juliet’s attitude toward Gnomeo. Throughout their perilous adventure, both Sherlock and Juliet learn to appreciate their respective partners as equals: to compromise and cooperate. It’s a slightly more complex take on relationships than one would expect in a movie titled “Sherlock Gnomes.” But the film is not revolutionary, and lacks the nuance and depth of better films like this year’s “Peter Rabbit.” Gnomeo, Juliet, Sherlock and Watson live happily ever after, and there’s never a moment that jeopardizes their future.

But no one is going to “Sherlock Gnomes” for the marital drama — it’s a children’s comedy. It should be funny. Despite the film’s surface level juvenile appeal, Stevenson directs most of the humor at adults. Rather than embrace the whimsy or silliness that lend children’s films their charm, Stevenson depends on anachronistic pop culture references.

Allusions to Elton John — the film’s executive producer — populate “Sherlock Gnomes,” but they’re rarely funny even if you’re familiar with John’s body of work or notice his original music in the soundtrack. How many children will recognize that Benny’s (Matt Lucas) ringtone is a modified version of “Bennie and the Jets” or will appreciate that Gnomeo’s code name is Tiny Dancer? Even modern references, like Moriarty’s obsession with a selfie stick, feel a few years out of date. Only Mankini (Julio Bonet), a garden gnome wearing a micro one–piece bikini who lives to party, delivers on the silly, stupid humor that should be plentiful in a film of this caliber.

Animated films shouldn’t be limited to young audiences; the best in the genre appeal to all ages. But “Sherlock Gnomes” has an identity crisis. It’s marketed to children — the bright colors, simple messages and perpetual peppiness make this clear — but its outdated, stilted humor is directed towards adults. The result is a film that falls between both audiences without ever satisfying either.