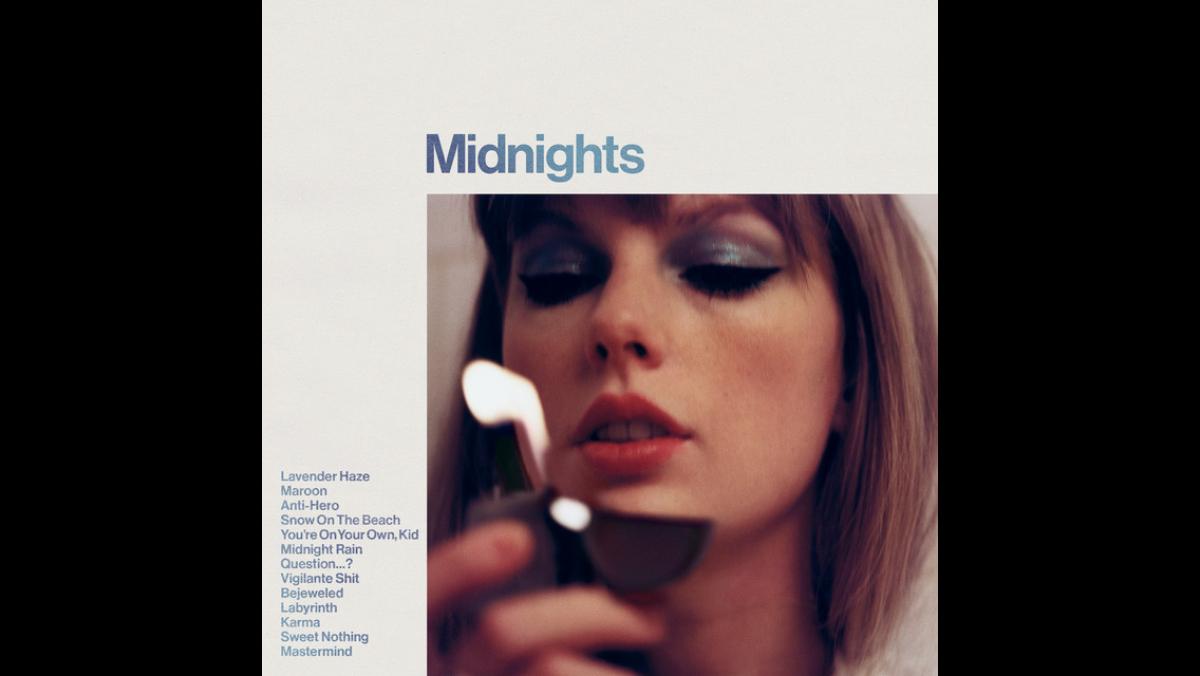 Courtesy of Republic Records
With the release of her 10th studio album, "Midnights," Taylor Swift reminds the world why she is a true pop star.
By Gabriel Biennas — Contributing Writer
Published: November 1, 2022

In 2020, pop superstar Taylor Swift shocked the world with her second original album of the year, “Evermore.” With poetically descriptive lyrics and introspective themes, “Evermore” was a soft and solemn sequel to its sister album “Folklore,” which was released earlier in the same year. At this time, Swift made a departure from her pop-infused country roots to a melancholy folk album, drawing focus onto her brilliant lyricism.

“Midnights” by Taylor Swift is a retelling of 13 sleepless nights over the course of the singer’s career. After gaining a whole new side to her fan base, Swift uses “Midnights” to remind the world who she is. As a body of work, this album has emotional highs and lows.  Blending the glistening synths previously seen on albums like “Reputation” and “1989” as well as poetically heartbreaking lyricism seen on works like “Folklore” and “Red,” “Midnights” feels like a love child of all of Swift’s previous pop albums.

Heavy influence from indie pop artists like Lorde and Lana Del Rey is apparent on the album. “Labyrinth” seems to recall the cinematic dream-pop elements of Lorde’s “Melodrama.” Del Rey is even heard delivering enchanting backing vocals and has a writing credit on the track “Snow on the Beach,” which sounds like a lost demo straight off her 2017 release, “Lust for Life.” This is not shocking considering that the producer of “Midnights,” Jack Antonoff, has worked closely with Lorde and Del Rey as well as Swift. The Grammy-winning artist has faced criticism for how evident Lorde and Del Rey’s inspiration has been in her work, especially regarding albums like “Folklore” and “Evermore.” Past tracks like “Wildest Dreams” and “Cardigan” draw on Del Rey’s smokey vocal techniques and darker themes. While the rise of indie pop sounds in the mainstream may be to blame, some tracks feel too familiar for comfort.

In Taylor Swift’s 2019 Netflix documentary “Miss Americana,” she opens up about what it’s like for her to have her life documented through music. During the interview, Swift said, “I’ll be going through something, write the album about it … sometimes it’ll just coincide with what they’re going through … Kind of like they’re reading my diary.” She knows her storytelling is what sets her apart from other artists. It’s also why most of her fans feel so connected to her work. Using her elaborate storytelling, Swift touches on topics that many of her fans can apply to their lives. On “Bigger Than the Whole Sky,” Taylor sings a gut wrenching yet uplifting tune about not having enough time with someone but remembering the joy they brought to the world. With lyrics like, “You were more than just a short time,” this song has had a mass resonation with people who have lost a loved one, especially parents who have lost children. This is the most redeeming quality of Swift’s music: without her storytelling and a fanbase who feels like they know her on a deeper level, Swift would have nothing to thank for her success.

The 32-year-old singer still does not lose her quirkiness. On “Bejeweled,” Swift delivers peppy and optimistic lyrics, shining with personality. This song is reminiscent of some of the singer’s former dance anthems like “I Think He Knows” and “Style.” Swift even recalls the punching bass and accusatory lyricism of “Reputation” in tracks like “Karma” and “Vigilante Shit.” Though she continues to go for that bubblegum-pop sound, Swift never fails to make a catchy hit. This is a quality of Swift’s music that is hit-or-miss for most people. Some may say Swift is tone-deaf or out of touch. However, it is evident that whether people respond more to “I thought the plane was goin’ down / How’d you turn it right around?” or “Karma is a cat,” this album has at least one song for every listener.

Overall, “Midnights” sees Jack Antonoff’s signature dance pop cohesively blended with Swift’s immersive lyricism, firing off the start of the album with the groovy “Lavender Haze,” the perfect segue into this listening experience. With hard-hitting ballads like “Sweet Nothing” and “You’re on Your Own, Kid” merged with scorned country rage on “Would’ve, Could’ve, Should’ve,” Swift masterfully explores various genres and topics throughout “Midnights” while still maintaining a cohesive body of work.