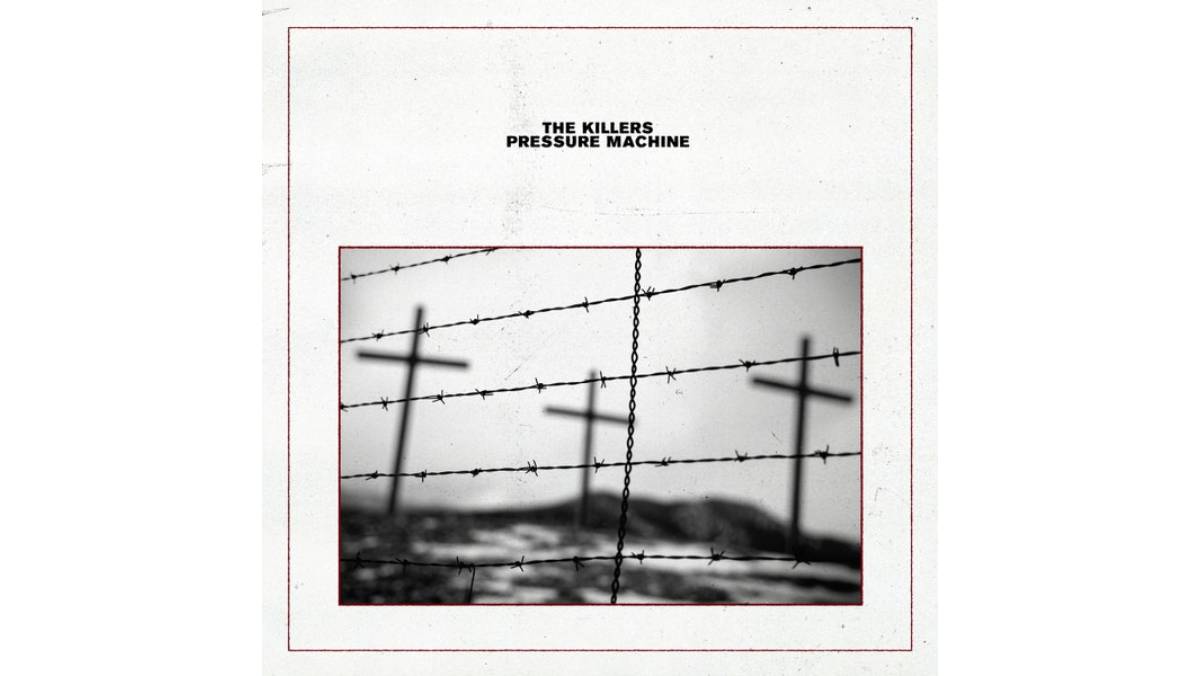 Courtesy of Island Records
While The Killers new album is perfectly politically-charged, there is too much context into the personal life of lead vocalist Brandon Flowers.
By Laura Ilioaei — Contributing Writer
Published: August 25, 2021

Known for its high-energy, pop-rock sound on songs like “Mr. Brightside” and “Somebody Told Me,” the band The Killers take a darker turn on their latest album release, “Pressure Machine.” A semi-autobiographical concept album, lead vocalist Brandon Flowers based the album off of his small childhood hometown of Nephi, Utah. ​

”Pressure Machine” is a mournful series of accounts of a dead-end, broken America through the lens of a corrupted small town and its happenings. Don’t be fooled by the faux idealisms of community closeness and preaching of contorted Christian values that the town tries to encapsulate. The people in it are imploding and can’t even save themselves from their own anguish. It’s an album that people who have grown up in a small town and left when they grew up can relate to.

The ​somber ballads in “Pressure Machine” are expositions of its themes, utilizing reverberation to aurally illustrate the pain of loneliness. Even the implied sheltered nature of a place like Nephi could not prevent the tragedy of the ongoing opioid crisis from diffusing into the town. The tracks, “West Hills” and “Terrible Thing” detail their protagonists’ lives in isolation — honing in on themes of Nephi’s opioid crisis, homophobia and suicide. The “West Hills’” character sings of freedom “in the west hills,” but there will never be freedom for her — neither in a jail cell, nor in her own home nor at the bottom of a bottle of “hillbilly heroin pills.” “Terrible Thing” reveals the suffocation of suffering inescapably in silence. The lyrical imagery in this song is one of the most potent in the entire album. It shows how a young, closeted gay man must battle the suicidal ideation that swirls in his mind as he repeats, “I’m in my bedroom on the verge of a terrible thing.”

Both tracks ache with despair while their lyrics reverberate constantly with a slow drum beat. Coupled with the heavy lyrics and shocking realization of their dark, tragic themes, they are enough to leave a listener swimming in a sea of chills.

The track “Quiet Town” focuses on multiple characters, rather than just one or two tragic protagonists. Piano notes beat like raindrops in a backdrop of the small town’s depressing downpour. The vocals too, are achingly mournful, though the dramatic sadness of the musical accompaniment is only an enhancing backdrop for the lyrical content of the track. “Quiet Town” details the story of teen parents and their child getting hit by a train as they lug their homes and grander dreams on their backs, while the younger members of the town battle its opioid crisis. The track’s crushing lyrics describe their graduation caps being replaced by gravestones and eulogies. There is hope by the end of the song, but it is a conditional band-aid solution: running away from the town.

Thematically, the album is a well-executed, perfectly politically–charged collection of work. Ballads are an effective way to create compelling narratives, and Flowers’s lyrics are undeniably powerful. Anyone who has grown up into and ran away from a small-town life would especially find “Pressure Machine” comforting through its relatability. However, the album overall felt like less of an album and more of a way for Flowers himself to get a cathartic fix that had been decades overdue. This is one instance where knowing too much context may detract from the enjoyment of the work.

​“Pressure Machine” is a bizarre album relative to The Killers’s other work, but “unusual” should never be synonymous with “bad,” especially not here. The album is consoling in that there is beauty that exists even in tragedy. It is a reminder that not everyone can shine, but that they can still be a symbol of artistry made of coarse, sterner material.