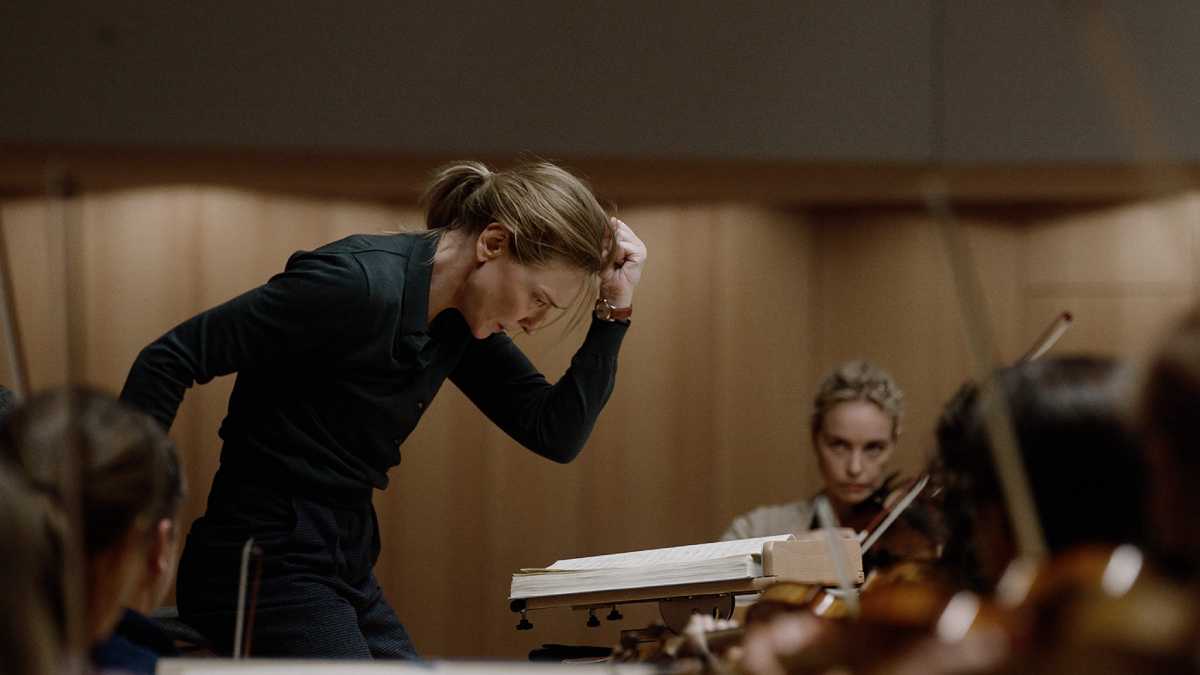 Courtesy of Focus Features
Lydia Tár (Cate Blanchett), regarded highly as a composer and conductor, sees her past secrets catch up with her in a new era of cancel culture.
By Patrick Mazzella — Staff Writer
Published: November 8, 2022

Director Todd Field is back after a 16-year hiatus, and he has much to say with his new film. The Venice Film Festival winner for Best Actress follows internationally recognized classical composer and conductor Lydia Tár (Cate Blanchett) as her years of dubious practices begin to catch up with her in a new era of cancel culture.

“Tár,” as a film, is a careful and slow character study, which may turn some audiences off to it. However, underneath the numerous and lengthy scenes filled with much more dialogue than action, there lies a deep look into Tár, the character, and her sinister practices. The film takes its time revealing its true intentions, but there are numerous hints throughout. There are two examples throughout: Tár’s pushback against a student who does not want to play Bach because of his misogynistic tendencies and Tár’s opposition to the idea that her status as the first female conductor of the Berlin Symphony Orchestra is historic. Field’s careful screenplay does its due diligence in attempting to get the audience to see where Tár is coming from, although audiences may not agree.

Blanchett appears in what seems to be every single scene in the film, with editor Monika Willi going so far as to only briefly cut away from her in many scenes, allowing viewers to study her complexion, expressions and emotions. The rest of the ensemble includes Tár’s wife and the first chair violin of the orchestra she conducts, Sharon (Nina Hoss), Tár’s assistant and conducting student, Francesca (Noémie Merlant) and the leader of her nonprofit, Elliot (Mark Strong), which helps find jobs in the music industry for marginalized prospective conductors. Each of these actors give very strong performances — Merlant being the best of those three — but Blanchett gives a career-defining performance, so it’s a bit hard for them to keep up. Blanchett’s role required more than just dedication to the dialogue on the page; she also learned a portion of the dialogue in German and learned to genuinely conduct an orchestra, which she does on-screen during many scenes to an impressive caliber.

It’s hard to say confidently what Field’s directorial and authorial intent is behind the story, as much of it is directly from Tár’s perspective and the audience is following her experience as — without giving too much away — allegations by a former fellow of her nonprofit come to light. Although the film seems to take a somewhat neutral stance on Tár herself and her guilt, there is enough depicted in the film to indicate to the audience that Tár is not the next cinematic saint, to say the least. Between the subtle glances she offers to women who are not her wife, or her insistence on defending even the most vile members of the classical music canon, Tár cements herself as the villain in the film. Watching her career face its greatest challenges seems to allow the audience to experience some catharsis seeing the conductor get what she deserves.

There isn’t much to complain about in “Tár.” Sure, many scenes are often slow moving and contain very little straightforward dialogue, forcing the audience to interpret the deep metaphors and allegories of the film, but the filmmaking forces thought out of the audience and entertains them in the process. And isn’t that what makes for a truly great film? Field seems to understand the cultural moment we’re in, one that has proven difficult to capture, with many films about this fast-moving culture proving to be a snapshot of an era already come and gone. The worldbuilding of “Tár” works to create such a vast but focused universe, forcing out any real indication of what exact moment we are in, and creating a sense of timelessness in the film. Field’s brilliance is finally back on the big screen; here’s to hoping there’s not another 16–year wait for his next masterpiece.