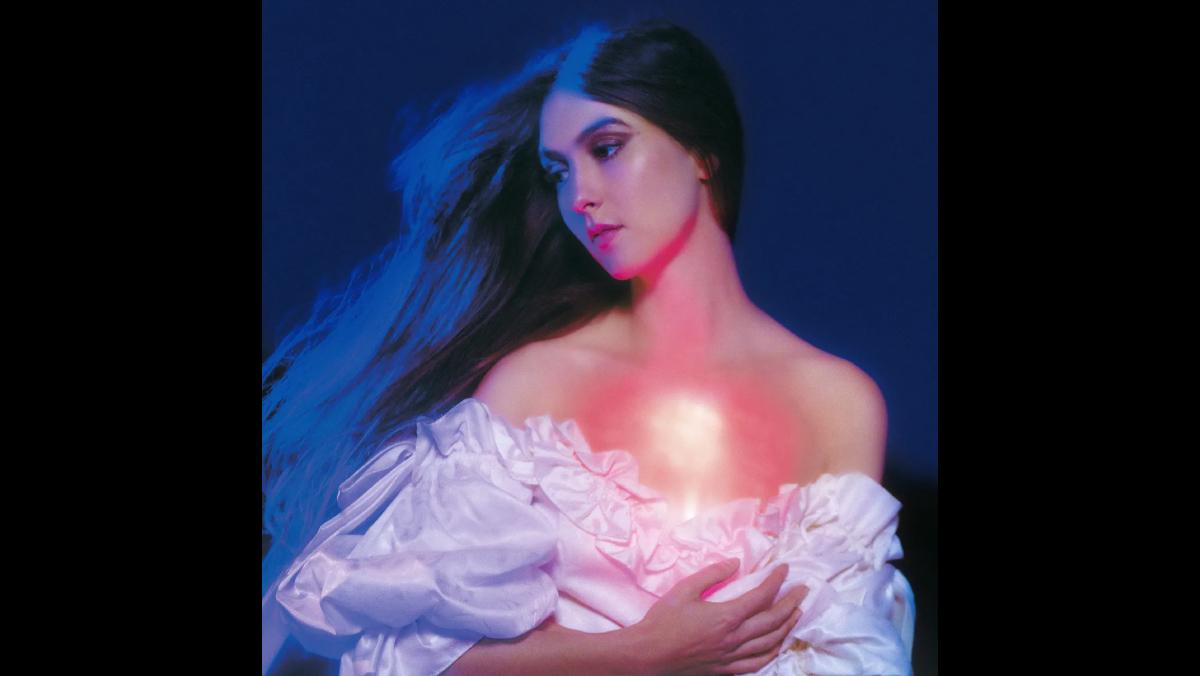 And In The Darkness, Hearts Aglow

Singer/songwriter Natalie Mering, who goes by the artist name Weyes Blood, follows up her orchestrally-stricken chamber-pop masterpiece, “Titanic Rising” (2019), with another set of stunning string and piano-led songs that have a slight aquatic flourish. “And In The Darkness, Hearts Aglow” expands on the luscious balladry of her previous record as she explores themes of heavy isolation and malaise, guiding the listener through emotional waves of baroque pop bliss.

Decorated with an unfaltering and flawless voice, Mering’s sweeping vocal phrases float over detailed and vaguely nostalgic song structures. Soaked in reverb and backed by a fleet of orchestral instruments — strings, choir-like backing vocals, even harp — Mering continues to lean into this perfect balance of melancholy and wonder, lamenting over some of the most magical instrumentals to ever grace the planet.

Mering starts strong with the lead single “It’s Not Just Me, It’s Everybody,” opening up the album with a dive into the prospect of universal loneliness. Mering weaves and meanders through this song as the piano and strings sway through satisfying progressions.

“Living in the wake / Of overwhelming changes / We’ve all become strangers / Even to ourselves,” she weeps, as the instruments swell to cushion her, providing a structure of support towards the vulnerability displayed. She settles down at the chorus, reaching a conclusive resolution as she affirms herself: “It’s not just me, It’s everybody.”

Undoubtedly fueled by the hyper-isolation afflicted by the pandemic lockdown, many tracks off this album have similar themes of navigating an overwhelming world full of the lost and the lonely. “Children of the Empire” is a jaunty and festive tune that casts pity upon the younger generation tasked with fixing world problems they didn’t start. The contrast created by the upbeat instrumental and the hopeless lyrics reflects the begrudging acceptance the youth absorb, born with a lack of any other choice: “The children of the empire know / Know that they’re not free.”

“God Turn Me Into A Flower” is a career highlight for Mering; a drumless, droning, ambient meditation on self-perception. Singing about being caught in a reflection, pleading to be turned into a flower, Mering references the myth of Narcissus. The song is as drop-dead gorgeous as the idyllic reflection portrayed in its lyrics. It continuously swells throughout its six-minute runtime, adding warm, mesmerizing synth beds, wildlife noises and dreamy vocal loops — by the end it divulges into pure blissful noise, resulting in one of the most unique listening experiences of this year.

Kicking off the second half of the record is the softly anthemic “Hearts Aglow,” which inspires the namesake of this album. The song is overflowing with influences from some of the best songwriting of the 70s: specifically Joni Mitchell’s “Blue” and The Beach Boys’ “Pet Sounds.” Mering narrates blind love, using impulsivity as escapism from boredom. The glow provided by this escape is displayed on the album art: Mering floating angelically with a glowing heart illuminating a void of dark blue.

As the second half continues, “And In The Darkness, Hearts Aglow” starts losing momentum. Unlike the nonstop wave-after-wave of catchy chamber-pop balladry on “Titanic Rising,” Mering struggles to create memorable moments of the same degree on this new project. Mering’s grip on a catchy chorus slips multiple times on this follow-up, and although the first half makes up for this with its sense of flow, the record starts stuttering near the end. Clunked up by an out of place dream-pop song imitating the artist Beach House and two forgettable instrumental interludes that surround it, Mering takes the listener out of a state of uninterrupted wonder for a detour that doesn’t really go anywhere.

“The Worst Is Done” provides a devastatingly real commentary on the prevailing notion that the worst of the pandemic is behind us when, really, our problems have just begun. It’s another highlight on the album, but at this point the instrumental palette starts to feel drawn out, especially after the break in momentum. By the time Mering reaches the outro, the merely pleasant “A Given Thing,” it feels as if she has run out of memorable ideas.