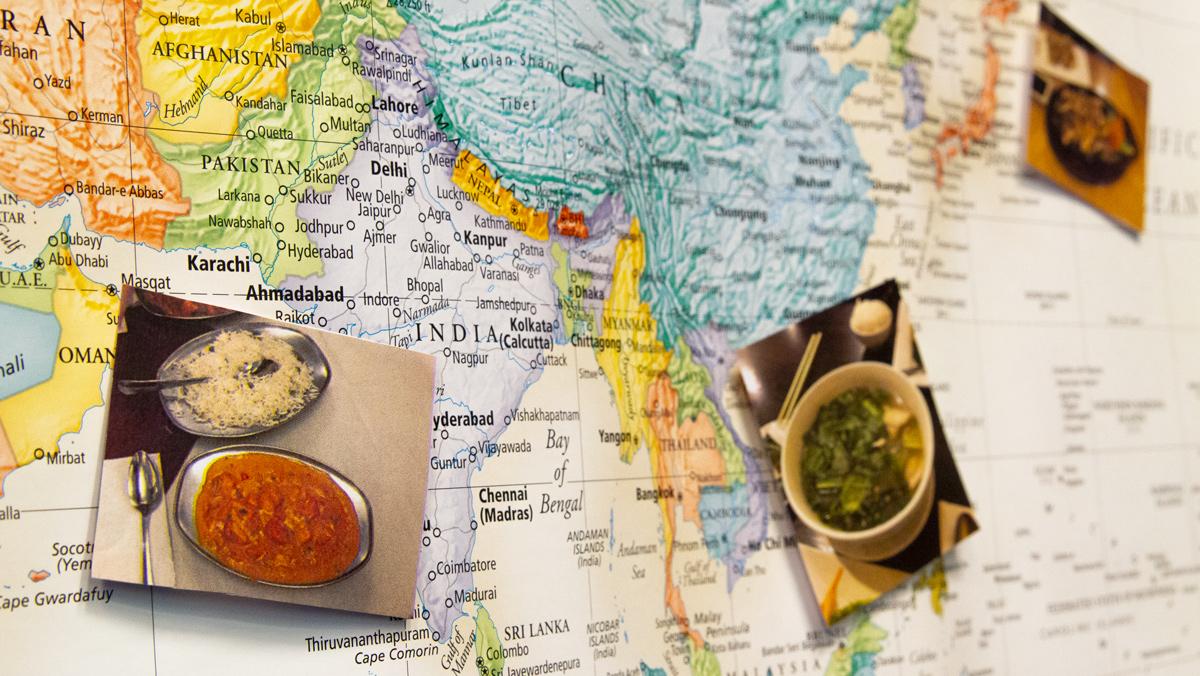 Ithaca offers a vast array of diverse cuisines from around the world, ranging from Asian food to Moroccan food. Each restaurant embodies different cultures through interior design and authentic cuisine.

On a taco Tuesday, Viva Taqueria and Cantina was packed with hungry customers craving delicious Mexican food. The wait for a table was approximately 15 minutes, but once seated, the server was prompt in taking orders. For only $9, the super nachos fed a table of five as an appetizer. The crispy chips and cheese were topped with jalapenos, guacamole, sour cream, refried beans and pico de gallo. Viva offers many entree dishes like fajitas, enchiladas and tacos ranging from $11 to $17. It has a fajita quesadilla that is basically just a steak quesadilla for $14. The price of the dish was a little high for the quality. The meat was slightly chewy, but the seasonings on the meat went well with the cheese.

The walls of The Commons Kitchen are overflowing with colorful Western African art and rugs. There is a corner by the counter with couches and chairs for customers to gather and drink Moroccan tea. Something that was a little off-putting was that the silverware was wrapped in paper napkins and that the drinks were served in plastic cups. The plastic and paper did not fit the restaurant’s level of sophistication. The chicken and couscous dish and the vegetable tagine dish were $30. This was a little pricey for the quality but reasonable for the portion sizes. The vegetables and the chicken were nicely cooked and seasoned. The chicken was tender but only seasoned on the outside as opposed to all throughout the like normal tagine would be. The couscous, however, was very watery and took away from the dish rather than adding to it. The service was good, and the food arrived promptly.

Sushi Osaka has a great location right in the middle of The Commons and is inexpensive when it comes to sushi prices. A Philadelphia roll, shrimp and veggie tempura and miso soup were $25 total. The miso soup was light, and the broth was very flavorful. The Philadelphia roll was filling, and the ratio of fish and cream cheese to rice was perfect. It definitely was not the best version of this roll in the world, but it was still good. The rice was a little bit dry. The tempura was a little disappointing and bland. The batter was bland in flavor and texture, and it could have been a little crispier. The lack of music and background noise made it challenging to talk. There were a few small issues like the cups having some stains on them. The food took a little longer than it normally should have to come out considering there were only a few other tables.

New Delhi Diamond’s is an Indian restaurant on Green Street that greets its customers with friendly faces and the smell of delicious food. On a weekend night, the waitress was rushing and sprinting from table to table. The food was rich and very well seasoned. However, it was a little pricey for the smaller portion size. An order of chicken makhani, rice and naan bread was approximately $16. However, the quality of the food was high. There was a good number of people there, and the restaurant was nonstop busy. The layout of the restaurant was appealing and organized, with a mix of raised booths, lowered booths and tables. It resembled the layout of a diner, making it welcoming to everyone who walked in.