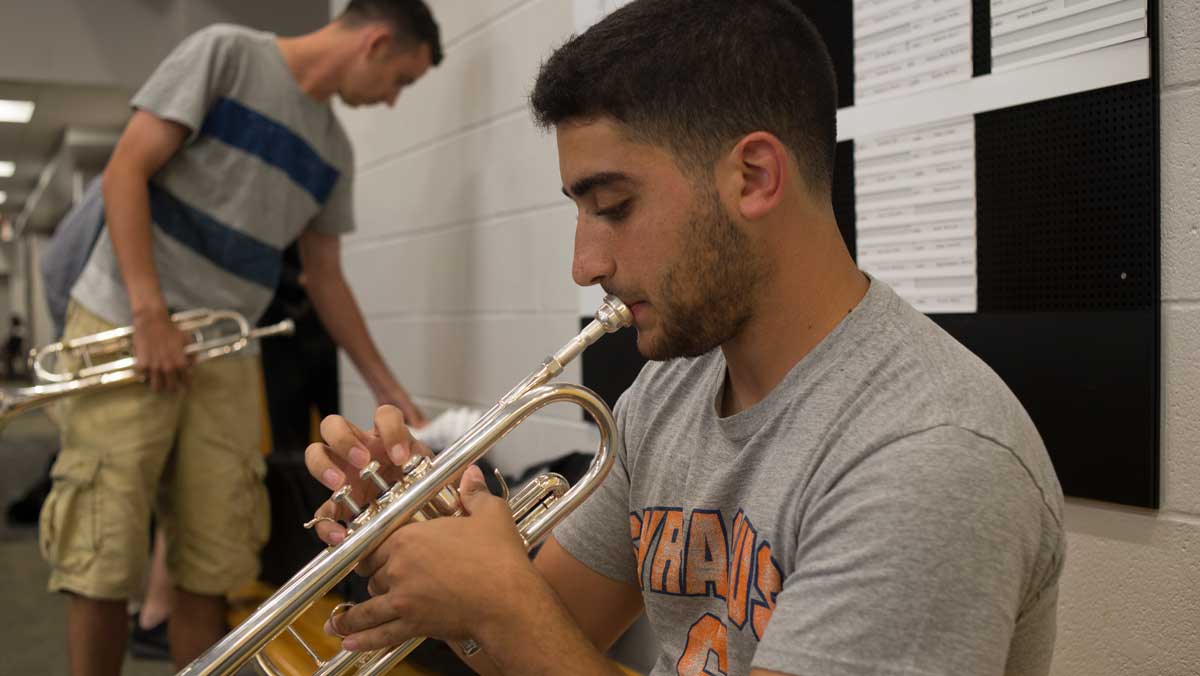 Fernando Ferraz/The Ithacan
Ithaca College students practice outside of the audition room in the James J. Whalen Center for Music while they wait for their numbers to be called.
By Mary Ford — Life & Culture Editor
Published: August 24, 2016

At Ithaca College, the start of every school year is routine. Parents come to drop off their children on move-in day. Upperclassmen often drive themselves and settle into the Circle Apartments or off-campus housing. Slowly, the campus grinds into gear, taking a couple of days to adjust before classes actually begin.

But in the James J. Whalen Center for Music and the Dillingham Center, the stakes are much higher from the beginning: Instead of taking time to unpack and unwind, students practice and prepare for the auditions that could chart the course of their college careers.

“This audition, cumulatively, takes about eight minutes,” senior music education major Courtnie Elscott said as she fiddled with her clarinet during early-morning practice Aug. 21, the day before her auditions began. “This eight minutes decides your entire year.” 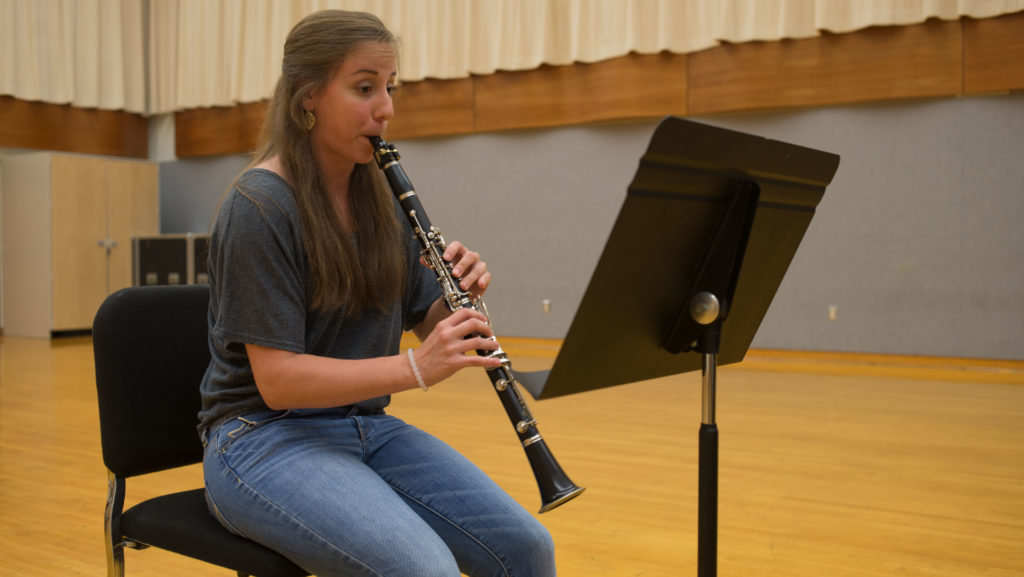 All performance students in theater and music are required to audition to determine their placements in classes at the beginning of each academic year. After that, the schools have key differences in their auditions for productions or ensembles. In Whalen, all auditioners are placed in an ensemble; it’s simply a matter of what seat they will occupy. After the first round, proficient performers are called back to play again, vying for spots in Wind Ensemble and Symphony Orchestra, which are considered slightly more advanced.

Meanwhile, in the theater school, auditions have already started. For most freshmen, it was the same day their parents moved them in; for some, it was their first time truly away from home. In Dillingham, the audition process was student-run. Stage managers, mostly theater studies majors, led the students from the long check-in tables at the bottom of the lobby stairs to holding rooms in the dance studios. For a few minutes, about 30 auditioners paced in the mirrored room, sipping water, warming up and chatting with almost every person they encountered, blowing off nervous energy. Then came the call: “Everybody ready! Everybody in the first block ready! You guys have your headshots? OK. Time to go upstairs.”

They lined up single file in the hallway, one by one, proceeding to the center of the stage in the Hoerner theater, facing the spotlight and the deep, dark corners it created. A dozen silent directors sat at tables in the auditorium rows, taking notes on who would best fit into the roles of the eight productions in Dillingham this semester.

One by one, the students announced their names, sang and gave a short monologue. After a strict 90 seconds each, it was all over.

Audio Clip: Freshman Kimberely Neuschulz singing “A Part of That” from “The Last Five Years.”

Audio Clip: Sophomore Cecille Rios reads a monologue for the role of Mary from “Company.”

Freshman Kimberley Neuschulz came out of her audition slightly flushed but bright-eyed.

“The whole thing was really intimidating, but everyone was really friendly,” she said breathlessly. “I was nervous throughout the whole thing, but the feeling of being onstage was something I really love, so that got me through it.”

Nerves abounded in the music school as well, where auditions began Aug. 22. Long lines of instrumentalists waited outside Presser Hall for their time slots when student proctors directed them to the center of the room. This time, the conductors sat behind a tall, black screen — music auditions are blind, so the candidates can’t make a sound except for the excerpts they play. Their numbers were announced by the proctor, who left the room. Then, alone, in the center of the yellow, bright hall, the musicians took a deep breath, and they played.

Christian DeFreese, a freshman French horn performance major, arrived on campus four days before his audition. Throughout his preparations, he slowly found his way around the music school building, keeping his campus map tucked in his pocket. He wasn’t sure of the names of the school’s ensembles, and he wasn’t sure of exactly how to secure a practice room, but as soon as he sat down with his horn and started to play, DeFreese seemed completely at home.

“My main goal is not to get too nervous,” he said. “And I don’t think that should be a problem.”

Most freshmen aren’t called back to the second round of auditions, but all performance majors are guaranteed something — for actors, a role at some point in their college careers; for musicians, a seat in at least one ensemble every semester. This semester in Dillingham, senior theater studies major Abigail Rowe said the odds of being cast in a production as a freshman or a non-theater major is higher than usual.

“We have eight shows that are casting this semester,” Row said. “This semester, there are a lot of shows, more than we normally have, so there’s a larger probability of freshmen and outside majors making it. For example, our first show, ‘Blood Wedding,’ has about 26 people in it, which is a lot for a play.”

Neuschulz wasn’t expecting to get a callback after her first audition, but she did. The final cast list will be posted Aug. 26, so she’s still not sure whether she’ll land a part in any of the shows. But, she said, the process itself was a valuable experience.

“Coming in as a freshman, it’s pretty hard because I haven’t taken any classes here and I don’t really know what it’s like,” she said. “But I wasn’t really aiming for any specific role. I was just going as myself, and if they want to cast me in something, that’s great. As a freshman, it’s a learning experience either way.” 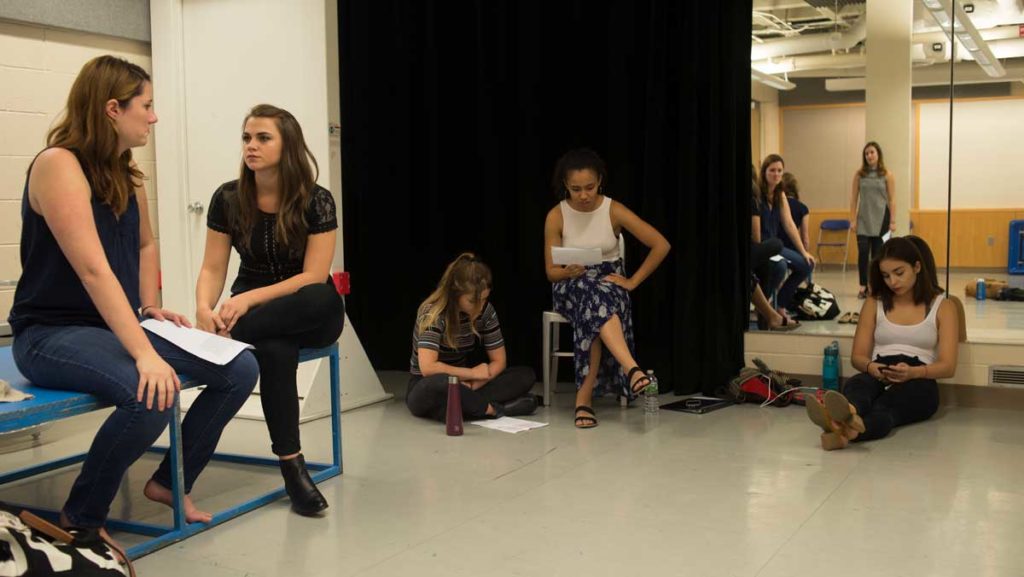 Theater students waiting to audition in holding rooms in the mirrored dance studios, chatting and rehearsing.

Rowe said most theater students are used to rigorous auditions, especially from when they applied to colleges or outside acting jobs. In Dillingham, however, camaraderie overrides competition.

“One of the great things about the Ithaca theater department is everyone is so close that when those cast lists go out on Friday, even if you didn’t get the role you want, everyone is so happy for their friends,” Rowe said. “It’s more of a celebration of what we’re about to create instead of getting upset over what you wanted versus what you got.”

In the music school, Elscott said, there’s a healthy mix of joy and disappointment when seating decisions are finalized.

“On the night that callback list goes up, there are always tears,” Elscott said. “Some are happy tears, some are happy for other people, even — but some are disappointed tears, too. Some people really believe they deserve to be in a ‘better’ spot than the one they were placed.”

In comparison to the family atmosphere in Dillingham, Elscott said instrumentalists often feel a little more of a competitive edge, which can be intimidating to freshmen. As a senior, she’s made it her goal to be more accommodating to newcomers than she said some previous senior classes were.

“Sitting outside the audition room, you can hear the people playing before you and after you, so you hear your competition,” she said. “And I remember, as a freshman, some of the other people around me were not so nice about the person who went after me, saying, ‘Wow, he’s taking that so fast, that’s too fast, he’s rushing.’ But I think this year’s senior class will be really different because we’re all supportive and friendly to each other.”

DeFreese hadn’t yet received much help from the upperclassmen, but he said he could at least talk shop with some of the older, more confident players, comparing instruments in the chaotic basement hallways of Whalen before parting ways again.

Attitudes toward the auditions themselves varied, too. Some, like Neuschulz and DeFreese, simply aimed to represent themselves in the best possible light. Others felt pressured to achieve. Elscott said that last year, her anxiety about making it into the better ensembles dominated her life. This time, though, she wants to take a note from her initial freshman–year auditions: Be confident.
“The stress really gets to you, so in the end, you have to understand that you just play, and then you end up where you’re supposed to be,” she said. “It doesn’t matter how good of a player you are. It matters how good your audition is. And that’s … that’s what’s a little nerve-wracking. But that’s the job.”