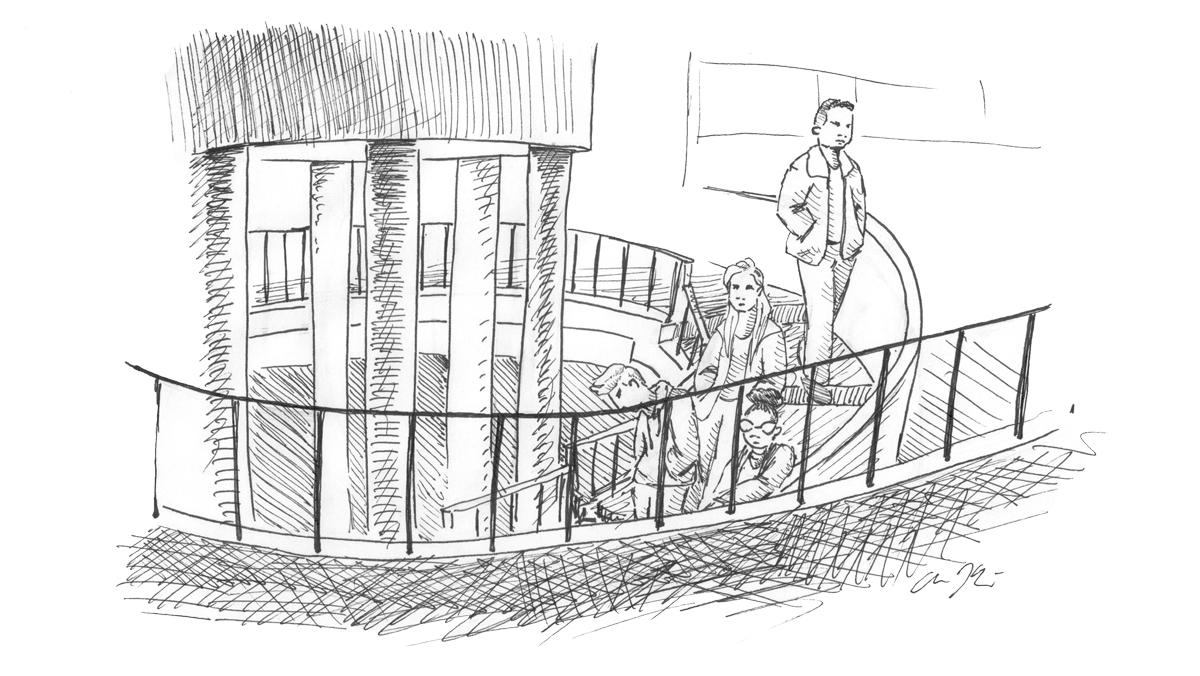 * Editor’s Note: The Ithacan‘s journalistic coverage of the campus often focuses on formal announcements and events. In doing so, we overlook some of the aspects of college that students will remember most. This “snapshot” is the third in a series of narrative accounts highlighting the student experience in Ithaca.

In this snapshot, Senior Writer Kate Nalepinksi describes the experience of late-night dining.

Do not enter alone. It’s better to skip a meal. If you must, it helps to appear preoccupied by consistently checking your phone every two minutes or anxiously wandering around and pretending to search for your nonexistent friends.

Follow the students who cascade around the circular staircase in the Terrace Dining Hall. Avoid eye contact with the student employee at the base of the steps, even when she glares at you. “Enjoy,” she’ll mumble, as she snatches the next student’s ID card. Her swiping hand has been a machine for the last few hours. You are not of any importance. She uses her other hand to check the time, counting down the minutes she has left.

It’s Thursday late night, and the theme is Southern comfort food. If you’re a vegetarian, you’re going to struggle; if you’re a vegan, don’t even bother.

There’s a 10-minute line to obtain the food from the bar. Fried chicken. Mac and cheese. Stir-fry veggies with chicken. Pulled pork. Collard greens. A freshman who waits on the line dabs into his Facetime call with his girlfriend. Ah, young love.

Groups of 10 students who enter are staggered by single individuals. Most of them try to appear busy, and you should follow in their footsteps. One guy in a plaid shirt edits a film on his Macbook between bites. Another watches Netflix. They all find seats near gargantuan windows, which offer a delicious sense of darkness with their meals.

Near the Food Lab, a food station catered to picky eaters, a girl with glasses learns over the counter. She makes sure no one is waiting behind her before asking, “Do you guys have veggie burgers?” A tall ginger man with a Leo constellation tattoo on his neck pretends not to hear her.

She tries again: “Do you guys have any veggie burgers?”

He points to both the signs above the chicken patties. “No, there would be a sign,” he says, and after she apologizes roughly 20 times, he disappears behind the counter.

A petite boy with tiny eyes and sharp features begins to devour his plate of food, occasionally looking up from the book he’s reading. At another four-person table, one individual sits with a sour look on his face. But not to worry, he’s not alone: two slices of pizza are there to accompany him.

The ginger employee with the Leo tattoo tosses another pizza into the oven. It’s going to be a long night.

Headphones. That’s the key. If you’re alone and you’re not using headphones, what are you doing? You freak.

Some students at circular tables are on their phones while others demand the attention of all the members of the party. None of them are looking — most are texting, under and above the table. Others are playing HQ with the volume blaring as loud as possible.

The Petite Boy is determined to finish his book this evening. He’s onto his second cup of coffee, and before starting a new chapter, he flips through the last few pages. His mouth flatlines, and after getting up to deposit his plate in the Rotating Dishwasher of Hell™, he leaves.

The Rotating Dishwasher of Hell™ is a conveyor belt that smells of week-old compost and lake water, and as student toss their dirty plates and spoons and cups and knives onto it, employees on the opposite side, inside the kitchen, are probably grinding their teeth and pushing the scarce food of the plates into the compost bin.

The lonely pizza-lover returns to his empty four-chair table with two additional slices, as his mother back in his white suburban town on Long Island wallows in sadness trying to conceptualize how her son ignored her snarky remarks about “the freshman fifteen.”

A group of six athletic men synchronically walks the dining hall. Their eyes are red, their lips pursed. They each sport a college-branded windbreaker or hoodie. They get into a playful argument about who’s getting the last slice of margherita pizza, though they can all see the ginger man with the Leo tattoo grabbing another pie out of the oven.

This group is the archetypal freshman clique.

You can determine a college student’s graduation year based on their actions in the dining hall. They’re not entirely equipped to be independent, so freshman travel in packs, desperately leaning on their recently established friends for comfort, even waiting on a line together. Loneliness, it seems, is not a key ingredient in dining hall food. Freshman do not go in alone.

A Nametag-less Girl stands behind the ice cream freezer. Her Sodexo uniform is clean except for the dab of vanilla on her hat. She’s not stressed — just irritated. Someone asks for soft serve and she shakes her head, but grabs a bowl anyway. She turns the nozzle, and brown liquid cream pours out. She hands over a bowl of chocolate soup with an artificial grin on her face.

As the athletes split an entire pie among the six of them, it’s unclear whether they’re starving post-football practice or just ridiculously stoned.

“Eight Days a Week” by The Beatles comes on. Most people are shuffling to the ice cream station, and tables are clearing out.

“J.R.” One girl in grey sweats and a lilac T-shirt yells from across the hall. “J.R.! OH, MY GOD! J.R.!” As she and her friends perform a choir of calls to the student, the room begins to quiet, except for The Beatles. They continue:

J.R., either ignorant or dense, does not respond. The Hollering Girl walks over to him and taps him on the shoulder. The others stay seated at a circular table and digress, as if they didn’t just hold the attention of the entire dining hall. 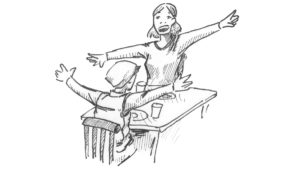 The Petite Boy is back, this time without a book and a beanie, but with a friend. They sit across from each other and lean in when the other is speaking. She laughs and stretches her arms out on either side, imitating an ocean wave. He mirrors her movements and suddenly the space they’re in disappears and it’s just the two of them. He rises from the table without her, and when he leaves, she smiles to herself with a fork full of spinach, like a girl in an iStock photo. He pulls her onto her feet and they begin to do the Rumba box step toward each other.

As they dance their way out of the dining hall, one of them stops to stare at the Comment Board. It only has two notes.

The first comment reads like a brainwashed child: “Hello! Thank you for your committment to providing delicious, healthy, and sustanable options! I (along w/ many others) would love it if you could provide more pierogie opportinities. Than you, I look forward to seeing more pierogies! (I would also love more mac ad cheese bars as well!)” The phone, name, email and date options on the card are blank.

Drowsy student workers attempt to clean tables with soiled rags. The Nametag-less Girl is finally smiling, her face glowing above a plate of milky mac and cheese. Her lips know the difference between a consumer smile and a genuine one. In the company of her friends, she isn’t identified by a nametag or an ice cream flavor, and the freezer that sits five paces away now seems like miles, not to be touched or thought about until next Monday.