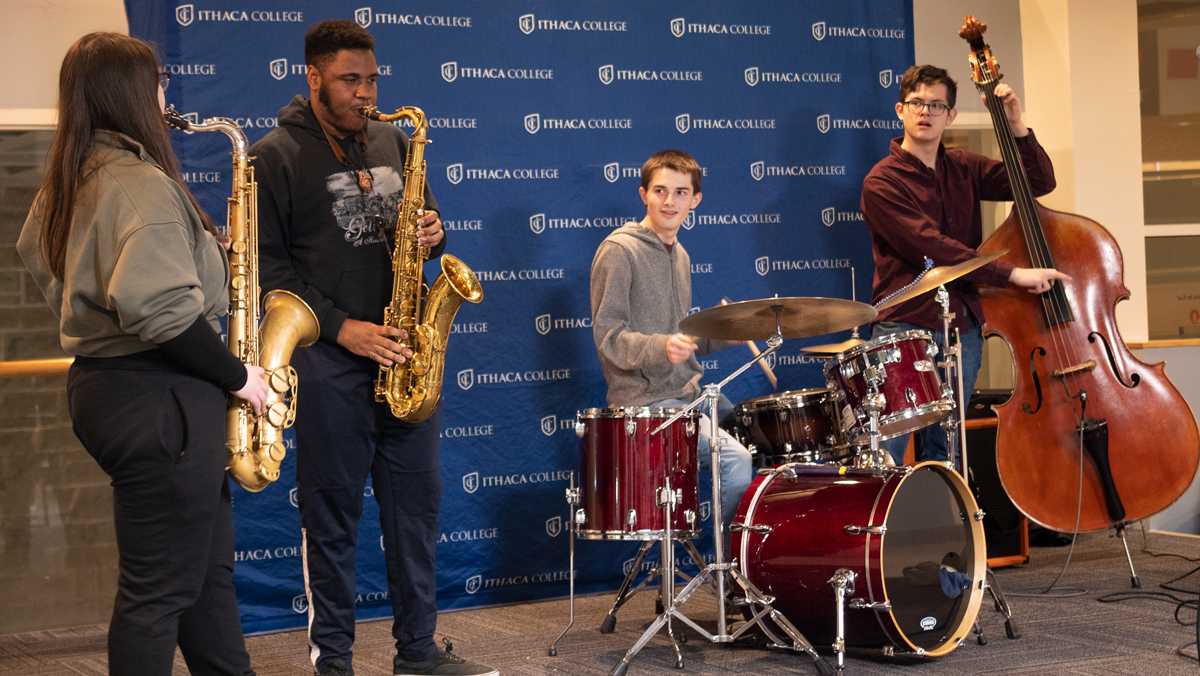 Walking through the Ithaca College Towers Marketplace, it’s not uncommon to hear the sweet sizzle of burgers and the crisp crackle of fries emerging from the kitchen. But on Thursday nights from 9 to 11 p.m., a new sound joins the symphony: jazz.

The IC Jazz Club, a music group on campus, meets every week at Towers Marketplace to host an open mic night in which students of any major can take their turns jamming to popular jazz standards.

Although the event has been going on for years, the club switched to playing at Towers Marketplace last semester to take advantage of a larger audience and venue. In the past, the open mic night was held in the Campus Center, the James J. Whalen Center for Music and the former Towers Concourse lounge.

The event is led by the house band, which consists of seniors Dan Yapp on piano, Eric Myers on drums and junior August Bish on upright bass.

Yapp, a jazz studies major, said the club is a nice change from his typical music classes. Students in the music school often face long practice hours and demanding course schedules, but Yapp said the open mic night is a great way to de-stress.

“Jams are a time to get out of the academic setting and just make music with people,” he said. “This is more of a collaborative experience. We’re all improvising, and we’re all just making music together.”

Sophomore Henry Sauer, a former jazz studies major turned writing major, said he has been coming to the open mic nights for a long time and enjoys the lighthearted jams.

“It’s such a great environment to kind of just show up and play,” he said. “There’s no judgment. We’re all just here to have fun.”

Although the group sounds well rehearsed, many of the musicians have never previously met. Everything is spur-of-the-moment: Most songs are chosen on the spot and never practiced as a group ahead of the show. Subtle nods and pointed looks are all that is needed to carry the band through the song.

Junior Sacha Presburger, a writing major, said that he decided to perform at the open mic night for the first time after hearing about the club at a recent student organization fair.

“I knew I wanted to do something musical even though I’m not a music major, and I wanted to find space on campus where I could do that,” he said. “They said, ‘You don’t have to be a music major. Just come and jam with us.’”

When Presburger took the stage, he glanced back at the band and closed his eyes, crooning the classic tune “Fly Me to the Moon,” famously sung by Frank Sinatra. Smooth bass and dancing keys accompanied his every word as a crowd of students watched intently.

Presburger said that he enjoyed playing with the band and that he would definitely come back to do it again.

“I was impressed by how easily they were able to fall in line to the music,” he said. “It takes a special kind of group to be able to communicate with each other in the middle of a song silently.”

“Now’s the time to put what I practiced into performing,” he said. “Sometimes, it can be a little nerve-wracking, but, other times, you’re burning. Your hands are working. Your mind’s spinning, and it’s just great.”

Yapp and Myers are both graduating this year, but they said they believe the club and open mic night will continue after they leave.

“August [Bish] will probably run it, but we’re definitely trying to make sure we can keep it going for the future,” Yapp said.

For now, however, Yapp said he’s just glad he can share his love of music.

“We get to reach out to more people,” he said. “It’s just the place to be on Thursday nights for jazz people.”