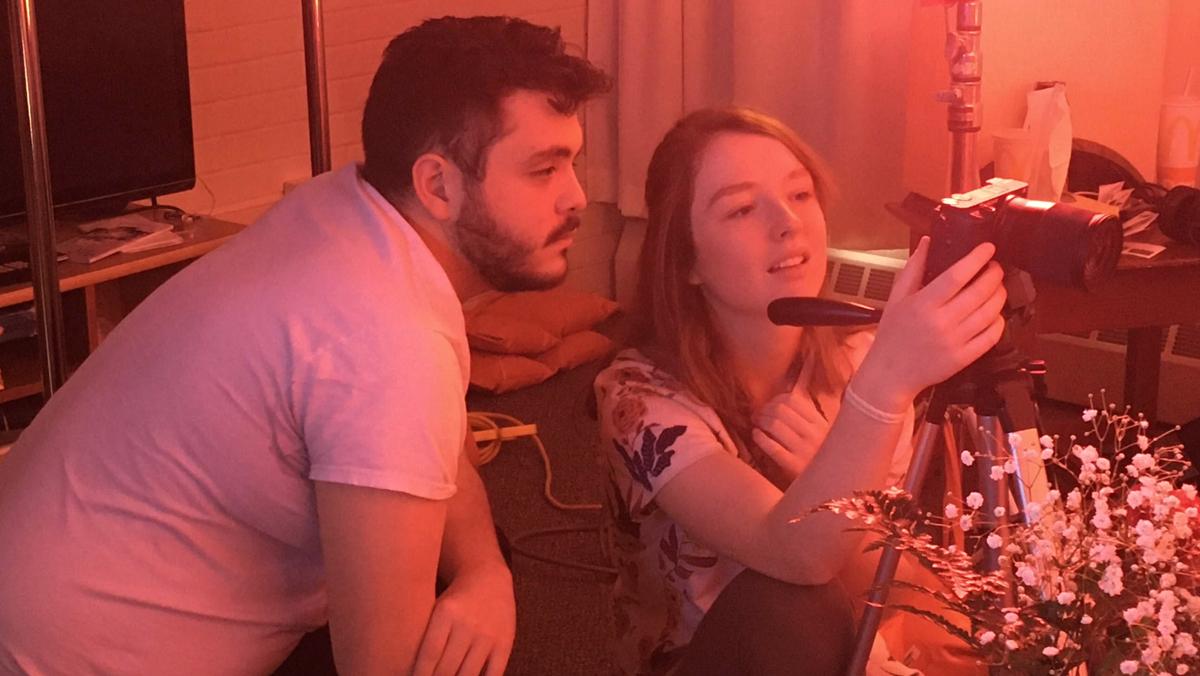 Being in the age of social distancing did not prevent senior Joel Liss and junior Joshua Stein from creating the web–exclusive show “Wormhole.” In this six–episode science fiction comedy show, a Garden Apartment gets completely turned upside down. Each episode follows a different zany adventure for the characters Joel, Josh and sock puppet Gilbert.

Influenced heavily by the 1960s television show “The Twilight Zone,” Liss and Stein star as themselves facing reality-warping experiences when they discover their apartment is the center of the universe. From a ravenous sock puppet to a never-ending chain of pizza delivery men, “Wormhole” covers a range of surreal plotlines that are different each episode. “Wormhole” is now in its final stages of the editing process and will premiere at 8 p.m. April 20 online with a virtual release party through the production company Slice4life.

This project was filmed entirely in quarantine with Liss, Stein and their roommates using equipment from Ithaca College Television (ICTV). Liss said the team shot its episodes on Sundays — one episode a week for six weeks. Liss said the first episode was filmed Feb. 21 and wrapped March 28.

The concept for “Wormhole” came about after Stein and Liss decided to create a show that they could work on together despite the complication of COVID-19 guidelines. Liss said the pair had a long history of writing together, and the pandemic allowed them to work together again. Liss and Stein kept “Wormhole” in mind when selecting roommates for this semester in order to create their bubble for filming.

“We are more built from COVID rather than adapting to COVID,” Stein said.

Compared to the typical 20–person crew for student projects, the series left its six crew members juggling a great deal of tasks. Liss and Stein, along with their roommates, seniors  Clara Montague, Julia Corcoran and Chris Tolve and junior Manuel Sanchez, all had to take on multiple jobs throughout the filming process.

Liss said Sanchez was the line producer and also helped by acting and doing tasks on set. Montague was another producer and also ran audio. Tolve helped by writing an episode, assisting with the filming on set and acting in an episode. Corcoran was director of photography.  During this unique production phase of being isolated, Stein said one of the biggest obstacles they faced was the limitation of people because they weren’t able to focus on just one job.

Liss said that producing this show has taught him about the necessity of people as a resource. Liss said he feels that film is the most collaborative art form that there is and that producing is a more positive experience with more people participating.

Both Liss and Stein said that working in close quarters also proved to be a difficult task. Liss said their apartment became more of a workplace than a home while they were in the filming stages. Their open concept living room was covered in equipment on a weekly basis, making it difficult to ever step away from the project.

“I think that it never got really really stressful or bad on set, but I think in an ideal world, you shouldn’t be working with the people you live with,” Liss said. “People need to diversify who they work with, who they live with and who they spend their time with.”

Stein said that in the height of production, the roommates would often resort to yelling to each other’s rooms about what needed to get done. He said this was good and bad in a sense because it was easy for them to work on the show but difficult to know when to stop working.

Corcoran said her biggest takeaway from the project was feeling she has grown as a professional.

“This is the first [project] that I think I felt a personal connection to the people that I was working with,” Corcoran said. “I appreciated the trust. … I think they specifically tried to get more women on set because they realized that on all of the sets they’re on don’t have a lot of women, and I agree. It was nice to just kind of be on a set that really appreciated everybody and doesn’t talk over people at all.”