Tangled: How women of color are brushing away hair stigmas 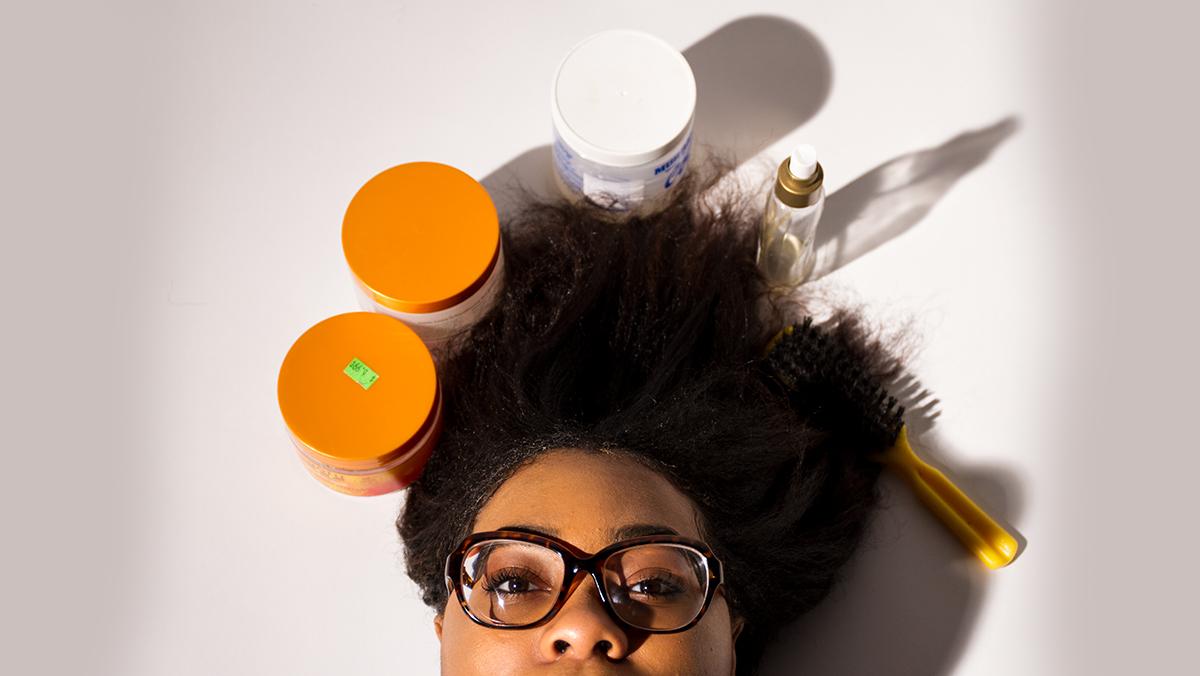 Accepting her hair has been a lifelong journey for sophomore Shinice Ford.

Raised in Staten Island, New York, she said it was uncommon to see curly hair of any kind, let alone on other black women and girls. When she straightened her hair for the first time in 8th grade, she said, her friends went crazy, saying she should wear it that way more often. As a teen, she took those reactions as a sign that this was how her hair was supposed to look.

“I feel like that’s the typical black woman story,” Ford said. “Either you’ve grown up ashamed because your hair is always straight and pressed out, or you developed that through how your peers perceived you in school.”

Reflecting the prevalence of Eurocentric beauty standards for hair — the straight and long hair of white women — a study conducted by the Perception Institute, called the “Good Hair Study,” shows that a majority of white women in America hold a negative bias toward women of color because of their hair. The study also concluded that white women hold the strongest bias against textured hair — common to black men and women — rating it as “less beautiful,” “less sexy/attractive” and “less professional” than smoother hair.

Despite this continuing stigma toward textured hair, a movement has grown in recent years among black women to embrace their natural hair. The growth of the natural hair movement has even led to a decrease in the sale of relaxers, a chemical lotion that “relaxes” or straightens hair for around six to eight weeks. Specifically, relaxer sales have decreased by 18.6 percent from 2013 to 2015, according to a consumer report by Mintel.

For black women, their hair is more than just a physical attribute — it is a political statement as well. The Afro carries certain connotations that are rooted in black political history. During the rise of the Civil Rights Movement in the 1950s, many black women adopted hairstyles skewing toward relaxed and straightened hair and black men adopted a trimmed hairstyle. It was a tactic used to present themselves in a way the rest of the country deemed more respectable.

But by the 1960s, restlessness among young black activists turned black hairstyles into a political statement. Stokely Carmichael, along with young leaders from the Student Nonviolent Coordinating Committee, began to splinter from Martin Luther King Jr.’s Southern Christian Leadership Conference and reject their respectability tactic. The rise of the Black Panther Party at the time also accelerated further adoption of the Afro as a statement of black identity. By 1968, prominent black activists like Jesse Jackson and Angela Davis began sporting the afro as a symbol of black pride. 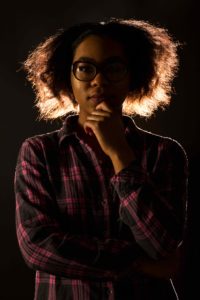 Since then, these political statements have been inextricably linked to Afros and other styles of black natural hair, sometimes turning navigating hair care into a complex process riddled with misconceptions.

When Ford was in the 10th grade, she said, she noticed the growth of the natural hair movement and decided to go with it. However, her transition to natural hair took a detour when she received a texturizing treatment because she wasn’t fully comfortable with her hair. This process makes naturally curly hair looser with the use of harsh chemicals. It is often used by black women to make their hair more manageable, but it carries a risk of causing damage and breakage. The result was, indeed, damaged hair: She said she had to cut most of it off, and she only recently started to let it grow out.

“That’s when I really started loving my hair,” Ford said. “A lot of that came from watching YouTube videos. Also, in the black community, there was this shift of wearing your hair natural and embracing that culture. It’s taken a while, and I just decided to grow my hair out again this summer. Me and my hair have come a long way.”

Hanunah Abdur-Razzaaq is the owner of Hanunah’s Hairspiration, a hair salon in Ithaca. Abdur-Razzaaq regularly works with textured hair and often shows the black women who come to her salon what they can do with their hair. However, she also said she has many African-American customers who do not like their natural hair.

“Our natural hair is beautiful, and a lot of us don’t think that,” Abdur-Razzaaq said. “I have customers that come in, and they think that their hair is horrible.”

There are also misconceptions about hairstyles belonging to black culture, such as cornrows and box braids, which have purposes other than style. The two hairstyles, which involve braiding or plaiting hair, are protective hairstyles that decrease breakage on the tips of hair. Sophomore April Carroll said these hairstyles are essential to maintaining healthy hair for many black women. 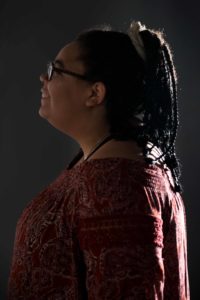 Sophomore April Carroll has struggled with the stigma of her natural black hair since she was about 9. Sam Fuller/The Ithacan

“My box braids protect my hair because they allow it to grow naturally,” Carroll said. “When it’s out, it’s more likely to get tangled and dried out over time.”

Despite this purpose, they have often been characterized as “ghetto” or “unprofessional” in mainstream culture. For example, in 2015 a fashion commentator made a racist remark about the dirtiness of actress Zendaya’s dreads on the Academy Awards red carpet. Zendaya responded by saying, “My wearing my hair in locs on an Oscar red carpet was to showcase them in a positive light, to remind people of color that our hair is good enough.” She referenced other successful black women who also embrace their natural hair, arguing that professionalism is not hindered by women’s hair care choices.

Sabrina Perkins has been running her blog Seriously Natural, aimed at spreading information about natural hair and black beauty products, since December 2010. She said she started the blog after wanting a creative outlet for her passion for writing and black hair. What started out as a hobby has now turned into Perkins’ full-time job, and she said she has learned much about both her own hair and the experiences of others.

“It’s not easy for every black woman to accept their natural hair, and I still see cases of it,” Perkins said. “For some women, it’s a matter of complying with the structures against black hair because it’s easier to conform than to stand up. Fighting against these themes is very hard to do. It’s not just hair, it’s so much more than that. It’s a matter of empowerment.”

Perkins said she has faced multiple cases of workplace discrimination due to her hair but that it has never stopped her from continuing to wear her hair in a natural style. She said if her hair makes them uncomfortable, that is no concern of hers.

“Natural hair is intimidating to them — it signifies pride,” she said. “It puts them off because it shows how we have found beauty within ourselves despite outside forces telling us that it isn’t. … During times of slavery, black people were forced to hide their hair in order to downplay their beauty. So that awareness that we can see ourselves as beautiful and prideful scares them.”

For Carroll, coming to accept her natural hair began in 4th grade, when she asked her mother if she could cut it because of how painful it was to comb through it. Carroll had to wait awhile for it to grow back, so she needed to wear it in different hairstyles throughout school. She said she often wore her hair in buns or box braids, despite how much she disliked the latter hairstyle.

She specifically remembers a time in 6th grade when she took her hair out of braids after wearing them that way for a while, forcing her to sport an Afro to school.

“That day, we had to go in, and we were supposed to pretend to be lawyers defending a case,” Carroll said. “I went in with my Afro, and I felt so professional, and the first thing that somebody said to me was, ‘Wow, you look like Frankenstein’s wife.’ After that, I decided to just not wear it out for a while.”

Over time, Carroll began to wear her hair naturally after seeing more and more people following the movement while growing up in Ithaca. In the media, she said, she never saw her hair well-represented, but seeing black hairstyles in her everyday life gave her the courage to accept her hair. She said she realized her negative feelings toward herself never came from her, but from the people she was surrounded by.

Ford said escaping the mentality that natural or curly hair equates to ugliness is difficult as a black woman due to a lack of proper representation in the media. She said black women need to embrace what they look like instead of accepting the discriminating portraits of beauty that are often presented in society.


“I don’t feel like it’s unattractive to have curly hair,” Ford said. “It grows out of your head; it’s natural. It’s just another part of loving yourself. I feel like society has placed a lot on black people to not love themselves, so it’s hard to embrace that because there’s so much oppression that has led to this missing self-love, and not loving your hair just adds to that.”