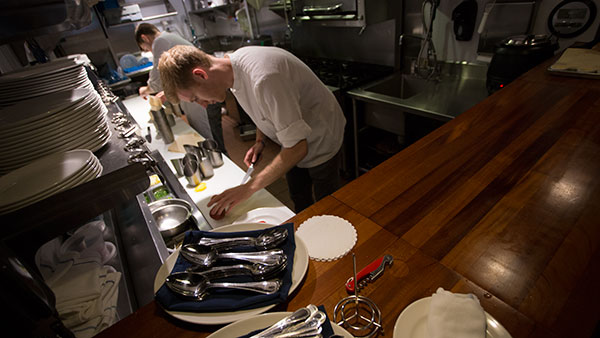 Sandwiched between the brown and beige of Mercato Bar & Kitchen and the dark brick of Mahogany Grill, Le Cafe Cent-Dix is difficult to overlook. It’s painted pale periwinkle with white accenting the large windows and a dark blue line tracing the outline of the building. It’s a break from the drab, dark colors generally found on “Restaurant Row,” the common name for the block of restaurants on North Aurora Street. Cent-Dix’s exterior is not the only unusual aspect of the restaurant. Opened July 1, it is currently the only restaurant in Ithaca serving traditional French food and wine.

French food is not new to Ithaca. Many restaurants have sold a similar fare, some more successfully than others, but what sets Le Cafe Cent-Dix apart is its owners. The four partners, Lindsey Norkus, Kate Norkus, Greg Norkus and Eric Trichon ’98, are quite familiar with the Ithaca dining scene. They own the place next door, the “Italian-inspired, seasonally-conscious” Mercato Bar & Kitchen.

They opened Mercato, an established restaurant in Ithaca but still a young restaurant by many estimates, in 2010. Trichon said the push for the Mercato owners to open a new establishment next door was really a matter of circumstance: After the neighboring space, Blue Stone Grill, suffered a fire in December 2012 and the owner decided to keep it closed, the Norkuses and Trichon saw an opportunity they couldn’t pass up.

“There’s four of us. It’s not necessarily small; we have to do something else eventually because one restaurant can’t sustain all of us,” Trichon said. “No matter how busy you are, you can only do so many covers a night, so we talked about it. At Blue Stone, the owner did show some interest in selling, and then he ended up having the fire.”

The decision to shift from Italian-inspired to classic French in the new restaurant came from what Lindsey Norkus and Trichon said was a gap in the market. Ithaca has been host to French restaurants in the past, notably the now-closed Dijon: A French Bistro, but all had failed, leaving the town’s usually encompassing food scene missing a key ingredient.

“It’s just a timeless concept, and no one was doing it,” Lindsey Norkus said. “The last place that was, Dijon, had some success. They did end up failing, but they were very well received, and a lot of our customer base at Mercato missed going there.”

Like at Mercato, Cent-Dix’s menu is only a page long, something Trichon said they pride themselves in. The food is fundamentally French: escargot and steak tartare top the hors d’oeuvres list, while Norkus said the stars of the entrees are steak frites and poulet roti. There’s also a rotating menu of plats du jour — daily specials — the most popular option being the veal sweetbreads dish, which Trichon said they almost always sell out of very fast.

The sweetbreads, made of veal thymus and pancreas, are served with thinly sliced potatoes roasted in duck fat and sprinkled with grilled onion strings, red baby beats, beurre blanc and a veal reduction.

The dish is a favorite of Rob Gearhart, assistant provost for online learning and extended studies at Ithaca College, who had never tried sweetbreads previously. Gearhart and his wife were loyal customers at Mercato and, after eating there shortly after the opening, have quickly become regulars at Cent-Dix.

“The food is amazing, the service is incredible, they’re just sticklers about that, and they make that a very enjoyable experience,” he said. “The atmosphere that they create is very purposeful — well designed, but in this case, comfortable, like it has been there forever.”

The restaurant’s decor is minimal but tasteful — perhaps a reflection of the similarly classic, minimally experimental cuisine on the menu. Brown booths are lined flush against a blue-gray wall. Framed mirrors are puzzle-pieced together to give the customers a view of themselves eating and the illusion of a larger space. The bar, made from a slab of scratched zinc, is one of the biggest deviations from Mercato. The older restaurant is known for its innovative cocktails, but Cent-Dix has a much lighter selection of liquor, focusing instead on le vin — wine.

“That was something that we did intentionally because you don’t want it just to be the French version of Mercato,” Trichon said. “We did want there to be some differences, and that is one. We have four or five cocktails at Cent-Dix, and at Mercato there’s 11.”

Trichon said the restaurant has made a conscious effort to not just sell Finger Lakes wine, like many other area restaurants, but instead strives to give customers an authentic French taste. However, perhaps the most notable item on the beverage list is the wine on tap. Always featuring a white, rose and a red, Trichon said the wine comes in a 20-liter keg. It can be ordered by the glass, $7, half-liter, $19, or liter, $36. The tubing it is poured through is a non-reactive metal, leaving the taste of the wine unaltered.

“The nice thing, also, is there’s less of a carbon footprint,” Trichon said. “You’re not paying for a bottle, you’re not paying for a label or the cork, so that’s very cool, and it was just, like, let’s try it. It’s a little different. We don’t do beer on tap — it’s just wine. I think more people end up doing it. It’s practical, it’s economic, and you get a really good product for not a lot of money.”

Le Cafe Cent-Dix’s atmosphere and food has won Gearhart over, and now two of his favorite restaurants are within a stone’s throw of each other.

“Since Cent-Dix opened, we haven’t been back to Mercato,” Gearhart said. “We’re at that point where we’re like, we have to go back to Mercato, and it doesn’t have anything to do with that we’re tired of Cent-Dix, we just need a little variety, and that’s what we love about them having two restaurants.”