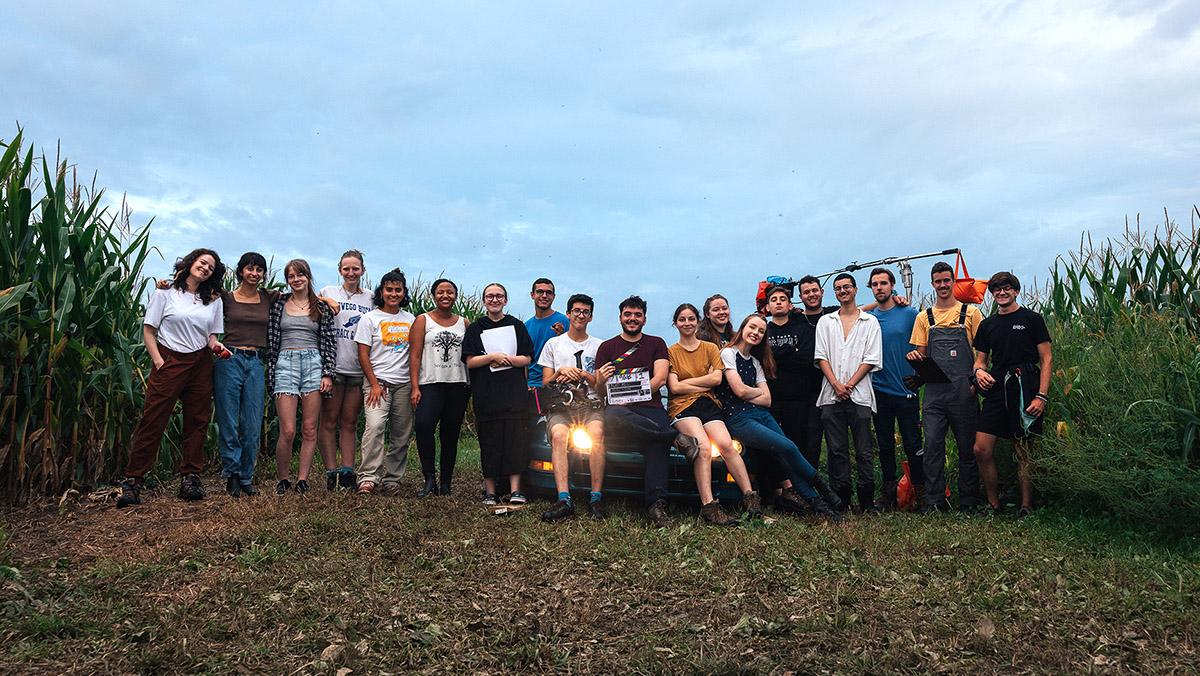 Courtesy of Tenzin Namgyel
A group of students work on "Road Kill," a senior thesis project produced by four Ithaca College alumni. The film is in competition at the Motor Film Awards on Sept. 21 in the category of "Best Student Film," with other categories in the award ceremony including films like "The Batman," "No Time to Die," "Ambulance" and "Night Teeth."
By Elizabeth Kharabadze — Co Life and Culture Editor
Published: September 14, 2022

“Road Kill,” a thesis project among four Ithaca College alumni, made its way across the pond to the International Motor Film Awards in London, where it will compete against other films for “Best Student Film” on Sept. 21.

The film was co-produced by Joel Liss ’22, Joshua Stein ’22, Manny Sanchez ’22 and Clara Montague ’21, all of whom had collaborated in the past on several short film projects at the college and the ICTV series “Wormhole.” The Motor Film Awards highlights works of film and television with a focus on motor vehicles, culminating in a screening and awards ceremony Sept. 21 in London at the Clapham Grand. Awards include “Best Cinematography,” “Best Documentary Feature,” “Best Editing” and a “Grand Prix Award.”

A post shared by Road Kill the Movie (@roadkillmovie)

“Road Kill” is a short film that follows a young, aspiring stand-up comedian who discovers a dark secret about her idol’s success. The film takes inspiration partially from comedian Mike Birbiglia, whom Liss said performed a stand-up routine about borrowing his parents’ car while he was trying to make it as an up-and-coming comedian. The horror element of “Road Kill” was influenced by “Little Shop of Horrors.”

“It just struck me as this really interesting image of someone who’s desperately trying to reach a certain level in their artistic field,” Liss said. “It’s a pretty rich metaphor that I thought would be really interesting to [combine with] a ‘Little Shop of Horrors’ narrative.”

What started out as a simple idea in high school eventually evolved into a rough concept for a thesis project, which Liss said was the biggest project the group had ever done.

“What I think really convinced us was when we started writing that first draft of ‘Road Kill,’ I think we just got really excited about it,” Liss said. “And then it was really [Sanchez and Montague who said] we would rather make the car movie. It’s just a more exciting set than people sitting around and talking for five days. And that’s how we chose it.”

After reaching out to and being rejected from 14–⁠15 film festivals, Liss said he was expecting the challenge of having “Road Kill” accepted because the film does not send strong political messages that other student films choose to explore. Liss said he was encouraged by Eduardo Sanchez, co-director of Blair Witch Project, while he was still in college to make films that he was passionate about — not necessarily what the industry demanded.

“I got this email in my inbox, like, late because it’s an international festival and I’m here in Los Angeles,” Liss said. “I opened it up and it’s the list of nominees for the award show. And we were on it, which was really nice, because until that point, no one had really noticed [our film].”

The film’s overarching theme is that of success and how far one is willing to go to achieve that. In the case of the main character Alex, she is given the option to kill her way to success or walk away from achieving her dream.

“I think ‘Road Kill’ kind of ends up [with] a cool, ambiguous ending,” Stein said. “Alex, the main character, now knows the price of success that the main, standard comedian Charlotte has paid and, like, is she willing to do that? Is she going to drive off in the car and take the car or is she going to burn the car?”

Despite the film’s challenges to be recognized, Stein similarly said he was thrilled to find out the film had been accepted to an international film awards show.

“It’s just great to hear back that we actually got into one,” Stein said. “I’m still really excited that people outside of Ithaca are gonna watch it, which is pretty amazing to me.”

Sanchez said he was involved in the film’s creative process as a co-producer from the beginning and that it was a collaborative effort between him and the other producers.

“The whole experience was exactly all you can ask for on a thesis,” Sanchez said. “We had fun, we got everything done mostly on schedule, we made lots of small mistakes and at the end of the day, we made a good movie. We challenged ourselves and stuck the landing.”

The idea to use a car in the film as a plot device to further drive the horror element of a killer car came from Sanchez’s love for cars. Despite the film’s limited budget, Sanchez said he put a lot of effort into choosing a car that would suit the goofy yet creepy ’90s look the film was aiming for. In the end, he said they settled on a beat-up $400 Acura Integra.

“I’ve always loved cars and I put a lot of thought into what car we’d use for the film,” Sanchez said. “I’m proud of my editing and I’m super happy that it was recognized at the international level as a good film, but more selfishly as a good car film. Even though we’re just nominated for the student film category, to have my stylistic choice nominated in the same awards as the new Batmobile and Bond car is special.”

Stein also said the film was a great way to highlight the creativity and progress the four producers had made throughout their time at the college.

“We struggled to find a scene that showcased our writing and directing abilities,” Stein said. “Because there’s so much fun in it, which is a really good thing to have the spectacle and fun, but you also want to make it affordable for yourself to shoot. I think making it affordable also helps you just to prove that you have the skills. Then you’re gonna get the chance to do more than that eventually.”

Montague similarly encouraged students to push past their creative limits and create what they are truly passionate about.

“Don’t be afraid to go big for your big projects,” Montague said. “Buying a car for a thesis seems like a lot, but Road Kill wouldn’t have been the same without the Integra.”

“Road Kill” is currently in post-production and will be available to stream Oct. 31 on Youtube.