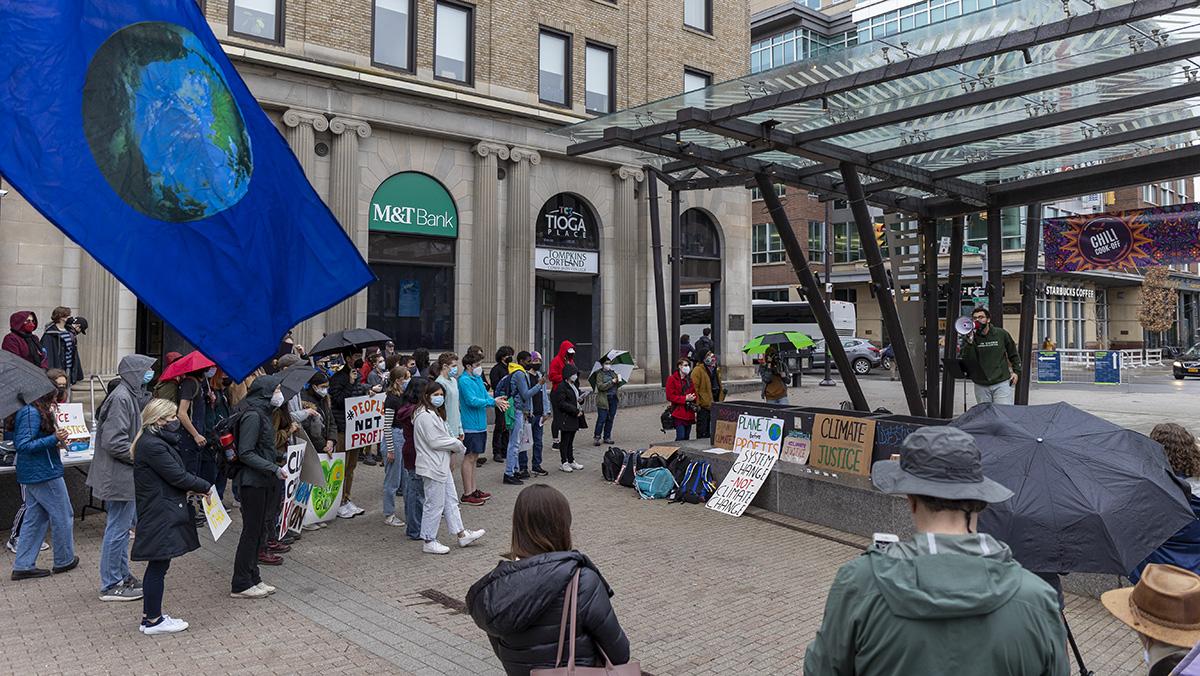 On March 25, protestors holding signs that read “Planet before profits” and “System change not climate change!” filled the Bernie Milton Pavilion in support of climate justice.

Their demands are part of a movement to strengthen Ithaca’s Green New Deal through climate justice efforts, which would address Ithaca’s socioeconomic inequality while lowering the city’s carbon emissions. However, the protest also was a local part of the return of the worldwide youth climate strike, after the COVID-19 pandemic put the movement on pause. The protest was organized by the Ithaca Sunrise Movement (ISM), the local chapter of the youth movement that aims to stop the effects of climate change while creating jobs in the process. ISM also collaborated with the Ithaca chapter of Democratic Socialists of America (IDSA), an American socialist political organization that advocates for a democratic economy.

The protest was part of the movement for climate justice, which aims to address the disproportionate effects of climate change on communities that have been historically subjugated. Climate reports have found that poor people and communities of color will be the hardest hit by severe weather events and rising sea levels that climate change brings.

Jane Glaubman, former adjunct professor at Ithaca College and lecturer in English at Cornell University, said that depending on identity, climate justice can mean something to one person and can mean something completely different to another person.

“It means all kinds of different things to different people at different levels,” Glaubman said. “Locally, we’re trying to think about what local campaign we could make that would make a huge difference to making this a more equitable community.”

Jorge DeFendini, a senior at Cornell University and the alderperson for Ward IV Common Council, spoke at the protest. DeFendini said the protest aimed to push for climate policy that reduces both carbon emissions and socioeconomic inequality in Tompkins County. Despite being an ideologically progressive city, the U.S. Census Bureau found that Ithaca has the worst inequality of any city in New York.

“A lot of folks in the [Ithaca] establishment — and this includes liberals and progressives alike — like to think that [being progressive] just means they mind all their p’s and q’s,” DeFendini said. “They might do statements or a number of things to virtue signal, when in reality, their action doesn’t match it. You can see that by the Green New Deal that passed. It wasn’t until very recently that we started adding teeth to it.”

DeFendini said the climate policy of wealthier nations must address that the Global South is one of the regions that will be most heavily affected by climate destruction.

“Personally speaking, I’m Puerto Rican, my parents come from Puerto Rico,” DeFendini said. “That’s just a perfect example of people in the Global South being on the front lines of climate change. … Even here in Ithaca and in the United States, we have an extra responsibility and the power to enact change.”

“At its heart, public transit is something that we have to get more comfortable with and have to embrace wholeheartedly because it’s just the most efficient way of moving people around,” Curtis said. “It’s the most green way to do it.”

Joaquin Lira, a teacher aide at Ithaca High School who is of Arizona indigenous ancestry, spoke at the protest. Lira said it is important to be aware of the fact that issues that climate activists face are often recurring. Lira cited the fight against former New York Gov. Mario Cuomo’s attempt in the 1990s to store nuclear waste in upstate New York.

“We need to always be vigilant because sometimes the old fights that were fought years ago by other generations all of a sudden find a way to come back,” Lira said. “About 30 years ago, we fought a big fight over radioactive waste that Governor Mario Cuomo tried to bring in [to Tompkins County]. We fought him back, the entire county. … Now there’s a lot of talk about taking that nuclear waste and moving it across county or state lines, which is ridiculous.”

Glaubman said she thinks many of Ithaca’s upper class people with democratic politics often help feed the city’s inequalities. In a city that votes overwhelmingly democratic, the top 20% of its households make 60.1% of all income, while the bottom 20% of Ithaca’s households account for only 1.0% of earnings.

“A lot of people [from Ithaca] think of themselves as having politics that are toward the left,” Glaubman said. “[However,] they own homes that appreciate in value, and they see this as a victimless thing, but we’ve got people living in real poverty here. … Those of us who are just regular people need to get together and stand up for a climate solution that will actually help us.”