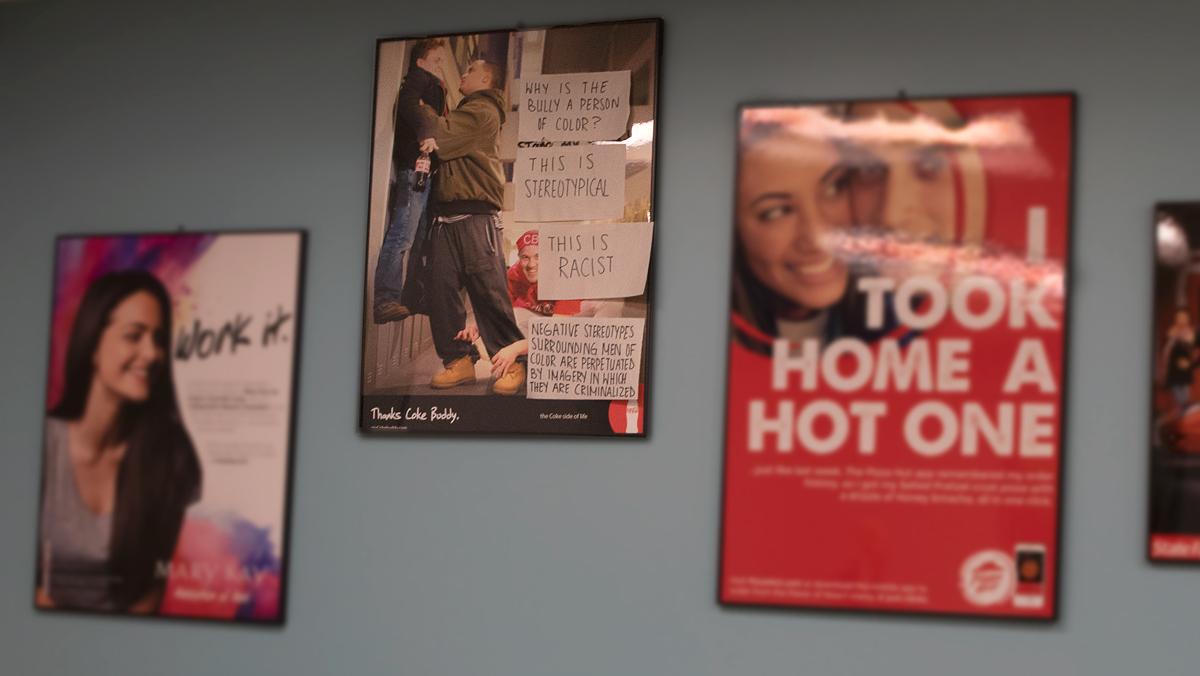 Abbey London/The Ithacan
A poster created by the 2007 Ad Lab team was marked with comments calling it racist for stereotyping a man of color as aggressive.
By Ashley Stalnecker — Assistant News Editor
Published: October 22, 2019

An advertisement created by students that hangs in a classroom in the Roy H. Park School of Communications at Ithaca College was marked with comments, first reported seen Oct. 7, accusing the ad of being racist because it perpetuates negative stereotypes about men of color.

The poster is an advertisement for Coca-Cola products that depicts a man of color bullying a white man of smaller stature. Another white man wearing a Coca-Cola bandana is tying the bully’s shoes in an attempt to thwart the bully. The comments, which were written on pieces of paper and taped to the poster, state “This is stereotypical,” “This is racist,” “Negative stereotypes surrounding men of color are perpetuated by imagery in which they are criminalized,” and “Why is the bully a person of color?” The comments appeared around Oct. 7 in Park 228 and were still on the poster as of Oct. 20. It is unknown who taped the comments to the poster.

The poster was created by the 2007 Ad Lab team, said Scott Hamula, associate professor and chair of the Department of Strategic Communication. Ad Lab is a capstone course for integrated marketing communication majors. At the end of the course, the students compete in the American Advertising Federation’s (AAF) National Student Advertising Competition (NSAC). In 2019, the college’s Ad Lab team won first place at NSAC.

Diane Gayeski, dean of the Park School, said via email that the poster will be left up with the comments attached to give context for the poster and with comments from the alumni who created it. She said she hopes the poster can serve as a resource for teaching.

“Ideally, in a professional communications school like Park, we not only pay attention to the changing norm, professional practices and cultural sensibilities that impact our field in order to prepare our students to be ethical media-makers, but we also hope to influence those already out in industry,” Gayeski said via email. “It’s my hope as dean that this situation has given us an opportunity to do both.”

Junior Mateo Flores, student chair of Diversity Advocates of Park, said the poster should be taken down, and it should be used as a reference for teaching diversity in the future. Gayeski established DAP in Spring 2018.

“I want the discussion to continue about this,” Flores said. “Obviously, having these kinds of conversations now before you go out into the professional world will impact the way you go about creating stuff like this. So I hope that we in Park as a whole can take this as a learning experience.”

Mike Mooney, assistant professor in the Department of Strategic Communication, said he and his students discussed the comments on the poster in his Advertising Copywriting and Art Direction class. Mooney said most students had not noticed the racial implications in the poster before, but, once the comments appeared on the poster, students took notice.

Julie Friedman ’07, who was on the 2007 Ad Lab team, said in an email that she applauds the students who raised concern about the advertisement’s content.

“At the time [the advertisement] was created race was certainly not considered,” Friedman said via email. “Chris, the bully in the ad, was simply a friend of the group making the ad and volunteered to be in the shoot. We didn’t recognize or select him because of his race. Chris was just a great friend willing to help out.”

She said the team should have paid more attention to the poster’s racial implications.

“I do believe there is a social responsibility when creating an ad that needs to be considered,” Friedman said via email. “As a group, this was overlooked. In the field of advertising, it is critical that messages we put out make the appropriate statement and this one missed the mark.”

Despite the lack of diversity in the Park School and the advertising industry as a whole, Hamula said the industry has been looking for ways to increase diversity. He said the AAF has the Most Promising Multicultural Student Program, which selects 50 senior college students of color every year to be honored in the program with networking and immersion opportunities in the industry. The program is meant to attract students of color to the field of advertising and help facilitate their entry into the industry. Hamula said as many as four students chosen in previous years have been from the Park School.