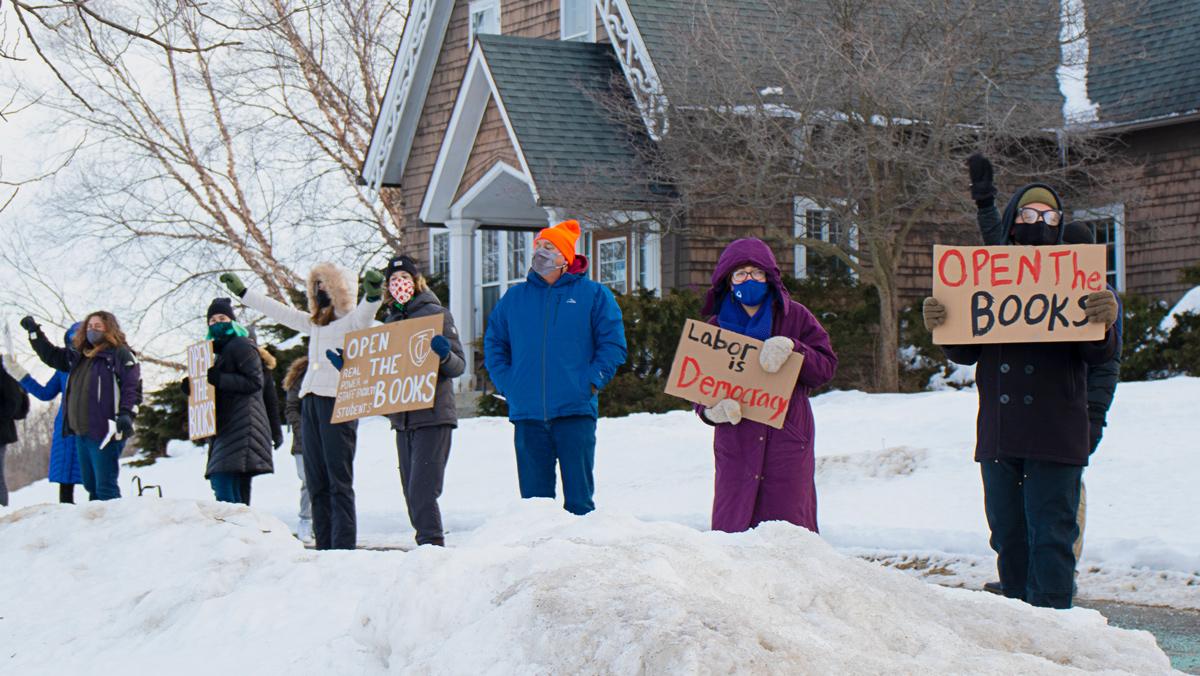 Ash Bailot/The Ithacan
Ithaca College community members protest against the faculty, program, department and major cuts at a rally held by the Open the Books coalition Feb. 8. Members of Open the Books and other students attended the "Future of the College" gathering March 4 to ask members of the administration questions about the cuts.
By Syd Pierre — Staff Writer
Published: March 10, 2021

Ithaca College administrators held a Q&A session with students regarding their concerns with the Academic Prioritization Program (APP) process March 4.

Unlike previous gatherings that were held in a webinar format, a Feb. 26 email from Cornish and Rosanna Ferro, vice president for student affairs and campus life stated that attendees could use the chat box and were allowed to appear on screen to ask questions. However, attendees have said that the chat box function was unavailable. Approximately half of the meeting was held as a Q&A session.

Sophomore Ben Jennings asked what the Senior Leadership Team’s (SLT) response was to students, faculty and staff who felt like their voices had not been heard or acknowledged during the APP process.

Collado said she disagreed with the claim that campus community members did not have the opportunity to be a part of the process.

“In the end, we’ve landed in a place that yes, there are some students, and some faculty and staff, that do not agree with this outcome,” Collado said. “That does not mean that we didn’t listen — it simply means we made a decision after getting various amounts of input.”

Cornish said there was no role for student or alumni input in the review process, which she said was clearly articulated in Section 4.9.8 of the Ithaca College Policy Manual.

“Have we heard from students? Yes,” Cornish said. “Have we heard from alumni? Yes. The recommendations have been finalized and approved. … If academic program prioritization is an ongoing process, we should never be in this position.”

Section 4.9.8 of the college’s policy manual states that proposals for staffing changes, discontinuations or redesigns of programs can be initiated by faculty members or administrators.

“Changes must be reviewed and recommendations must be submitted by the applicable dean and appropriate faculty bodies, such as department, planning unit or school curriculum or personnel committees and the Academic Policies Committee,” the manual states. “The department and planning unit must consult with faculty affected before making a recommendation. Final decisions on changes in staffing plans will be made by the provost and senior vice president for academic affairs and president after reviewing all of the recommendations which are submitted.”

Copenhaver-Johnson said that the Academic Policies Committee (APC), which was the only group allowed to receive the student feedback, has active student members.

Senior Elliot Weil said he thought that some of the language being used surrounding the APP process was vague and dehumanizing. He used full-time equivalent faculty (FTE) as an example.

Collado said she was disappointed to hear that Weil thought the language was vague. She said FTE is a common term used in higher education.

“It’s not a phrase that we make up,” Collado said. “It’s actually meant to be exact, so that individuals really understand, and certainly is not meant to be dehumanizing.”

Weil asked Collado for the number of people, not FTEs, that will be eliminated.

“When it boils down to actual people and current roles that are losing their jobs — most not immediately, over three years — it’s actually a much smaller number than the 116,” Collado said.

Cornish said 41 faculty positions would be reduced through attrition, and out of the 41, 17 faculty members were already scheduled to retire by December 2020. She said 44 FTE would be let go, 23 of whom were in multi-year contracts and eight in short-term contracts.

“This is something that happens every semester,” Cornish said. “Every semester, department chairs look at the number of students we have for the upcoming semester, and they determine how many part-time faculty — if they need any at all — based upon enrollment.”

Collado also said she wanted to emphasize how staff at the college have been impacted. At least 264 staff members have been laid off or furloughed since March 2020.

“There are plenty of staff who have communicated with us privately because they don’t feel that they can do it in public and in front of their faculty colleagues, how grateful they are that we’ve taken a holistic approach,” Collado said.

She said it is not her intention to pit staff and faculty members against each other.

“There have been questions about, well, ‘Why can’t we just cap everyone’s salary?’” Collado said. ‘“Why can’t we just do these different things?’ We have got to think about the whole workforce. If you were running an organization, would you allow, for the next three to four years, for everyone who works for the college to not be taken care of in terms of their own livelihood? Or do we make some very important decisions now based on a sustainable infrastructure that we must have to serve our students and really stabilize and get strong so that you can help the entire workforce overall?”