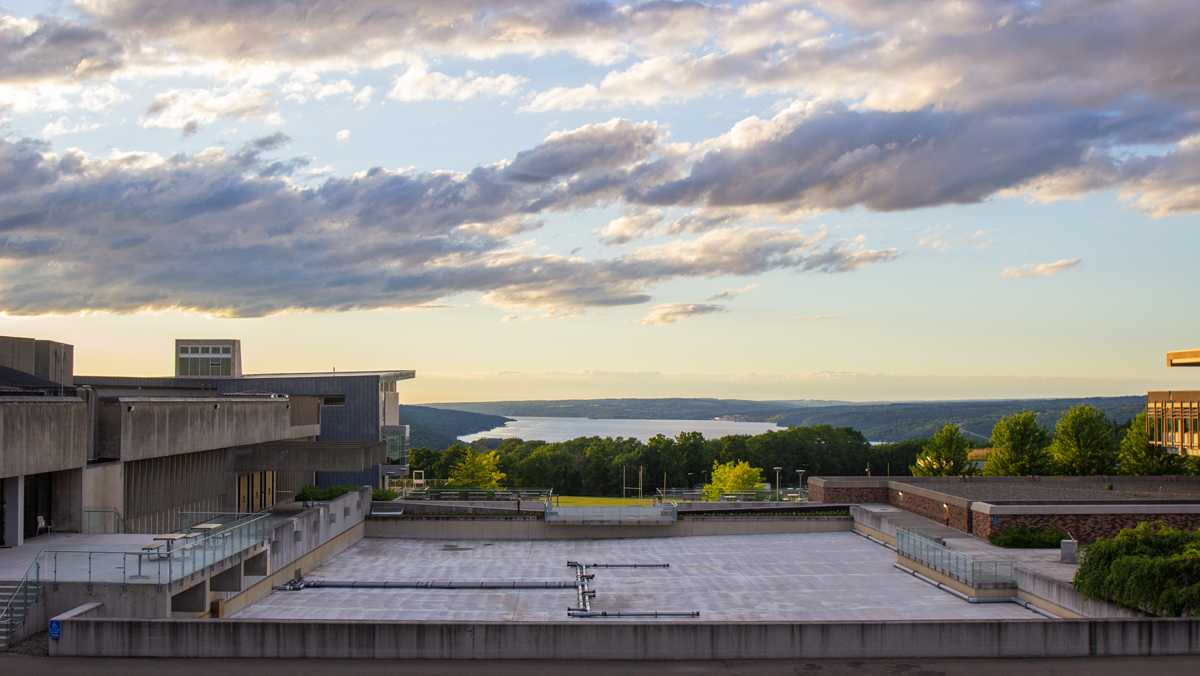 Members of the Ithaca College administration gave updates regarding program cuts and return–to–campus plans during the All-Student Gathering on Oct. 15.

President Shirley M. Collado said that the college fully intends to return to an in-person semester for the spring. The college had initially planned to hold Fall 2020 in person but reversed the decision Aug. 18.

At the Faculty Council meeting Oct. 6, La Jerne Cornish, provost and senior vice president for academic affairs, said that approximately 130 faculty members will lose their jobs because of decreased enrollment. The college saw a 14.55% decrease in enrollment from Fall 2019 to Fall 2020. Collado said at the All-College Gathering on Sept. 22 that staff and faculty reductions are because of needing to resize the college, as mentioned in the Ithaca Forever strategic plan.

“It’s not because of an enrollment crisis,” Collado said. “It really is about shoring up that we’re a leaner organization so that we can be sustainable over time but, most importantly, that we can really commit to protecting financial aid and growing it.”

Cornish said that the faculty cuts are because of the strategic plan and a need to determine a sustainable size for the college rather than the COVID-19 pandemic. Cornish said that enrollment has decreased over the past 10 years while the number of faculty members has increased.

Cornish said every academic program offered at the college is being reviewed to determine what will be discontinued, consolidated, reorganized or grown. She said retention rates and graduation rates for majors will be looked at as well as what majors are applied to more than others.

Students will no longer be admitted to discontinued majors and minors effective Fall 2021, Cornish said.

“Any major that is slated to be discontinued, you will have the opportunity to finish that major,” Cornish said. “It will be phased out over the course of four years.”

Cornish said that there will be a meeting for students involving the deans of all five schools at the college to further discuss academic programming.

Collado said that only a local, state or federal mandate against having students on campus would prevent a return to campus in Spring 2021.

“We are firmly and actively and intentionally implementing our [Return to Campus] plan in the fall,” Collado said. “It’s not like we’ve been remote and nothing is happening. We really are gearing up for what will be a return to campus in the spring.”

Collado said that the college is working to bring back as many students as possible. However, there is currently no decision on students who are from states on New York state’s travel advisory list. There are currently 36 states, Guam and Puerto Rico on the travel advisory list. Previously, the college said it would not allow students from restricted states to return to campus for the fall semester if it had been held in person. During the Parent and Family Virtual Gathering on Oct. 14, many parents expressed concern about the plan for the spring semester changing. Collado reiterated that the college is committed to bringing students back to campus.

There will be no spring break during the semester. Instead, there are five days off throughout the semester. These dates are Feb. 16, March 3, March 18, March 29 and April 23. Classes will end May 7 with finals being held from May 11 to 14. Senior week will begin May 17, and commencement will be May 23.

Students who want to continue to study remotely in the spring will be allowed to do so, said Rosanna Ferro, vice president of the Division of Student Affairs and Campus Life. Ferro also said that updates regarding move-in for the spring will be shared toward the end of the month, but students will be moving in between Jan. 25 and Feb. 8.

Classes will begin Jan. 25 and will be held online until the first day of hybrid and in-person instruction Feb. 8, Cornish said.

Jack Powers, interim dean of the Roy H. Park School of Communications, announced during the Parent and Family Virtual Gathering that the Ithaca College Los Angeles (ICLA) program has been canceled for the spring semester. ICLA was suspended in Fall 2020, and the college also suspended all of its affiliated study abroad programs for the 2020–21 academic year.

Cornish said the specifics for how students will be able to complete their requirements are still being worked out. However, she said there may be an “extramural” program for students who were planning to take part in ICLA. Cornish said that the extramural program would allow students to go to LA during the summer rather than the spring.

Susan Bassett, associate vice president and director of the Office of Intercollegiate Athletics, said that currently the plan is to have athletics, recreation and intramural and fitness activities in the spring.

She said that in discussion with the Liberty League, there are options to have a condensed winter sports season. She said she hopes for a decision in November. The college suspended all of its intercollegiate athletics for the Fall 2020 season, and the Liberty League canceled all league competitions and championships until Dec. 31.

Dean of Students Bonnie Prunty said all the details regarding move-in will be released in the coming weeks. She said that there will be limited move-in support for students in an effort to stop large groups of people from coming on campus. Students should also be thinking about how much they are going to bring with them to campus, Prunty said.

“We are going to need students to be really judicious about their choices about what they bring for spring semester,” she said.

Before the college decided to hold remote learning, students were asked to bring two suitcases and a backpack if they were living in a residence hall and were allowed to bring two suitcases, two boxes and a backpack if they were assigned to live in an on-campus apartment. However, Prunty did not specify if the same restrictions will be in place for Spring 2021.

Christina Moylan, director of public health emergency preparedness, said students should expect to have to quarantine for two weeks and get a COVID-19 test before coming to campus. Students who are currently living on campus, essential employees and people approved to be on campus for academic programs are currently tested once a week on either Tuesday or Wednesday, she said.

“It’s reasonable to expect something similar in the spring,” Moylan said. “The exact frequency we will know when we get a little bit closer [to spring semester].”

During the Parent and Family Virtual Gathering, Ellyn Sellers-Selin, physician and medical services director of the Hammond Health Center, said currently the center is open and staff members are comfortable seeing and treating students with COVID-19 symptoms. She also reassured parents and families that the center will take proper precautions to make sure all students can access medical care in a COVID-19–safe way.

Moylan answered questions from parents regarding isolation and quarantine on campus. Emerson Hall has 138 rooms and is being fully used as an isolation building, Moylan said. Students who need to isolate or quarantine will be able to do so in Emerson. At the parents meeting and student meeting, Moylan stressed that people should begin stocking personal protective equipment (PPE) and disinfection supplies.

Marsha Dawson, director of the Office of Residential Life and the Office of Student Conduct and Community Standards, said that the process for students to live off campus is currently paused for Fall 2021. She said that by the end of the semester there will be an update on the off-campus living process.

“It’s really important that you do not commit to a lease without first communicating with the Office of Residential Life,” Dawson said.