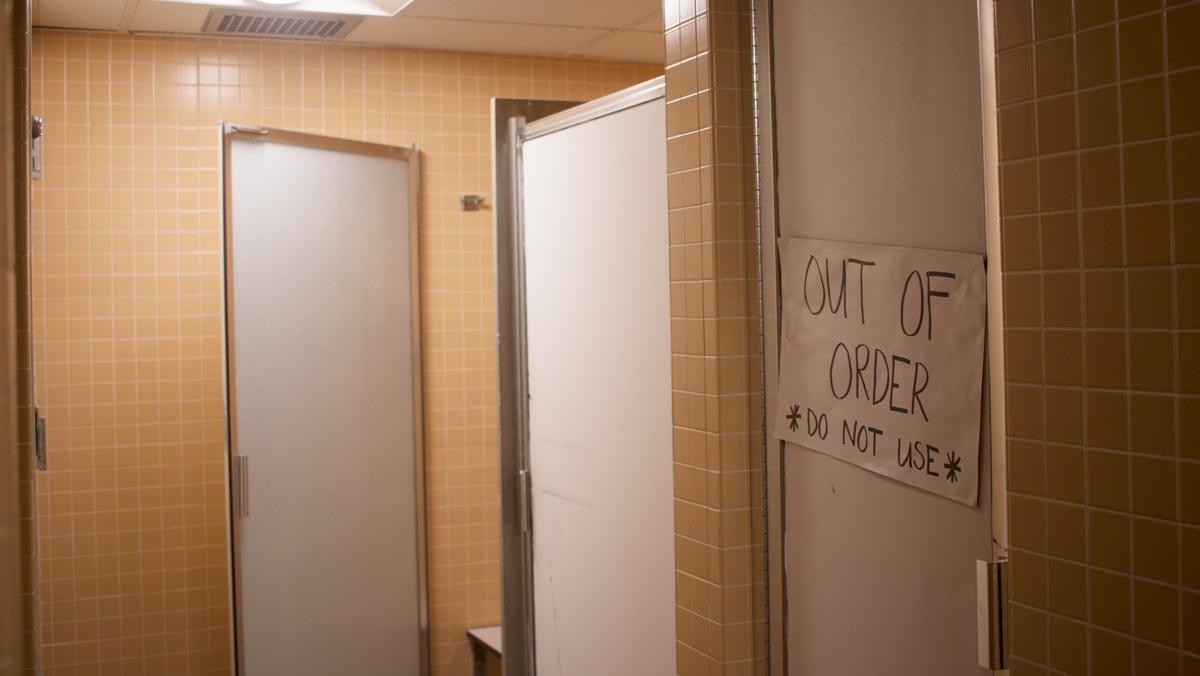 Julia Cherruault/The Ithacan
In mid-Setpember, this shower in East Tower on the third floor was flooded by a leak in the bathroom above on the fourth floor. The issue was not fixed until after Thanksgiving.
By Krissy Waite — Staff Writer
Published: December 6, 2017

Aging residence halls at Ithaca College are leading to harder-to-fix maintenance issues — a problem that many students on campus are noticing.

Many of these issues involve plumbing issues and broken laundry machines and elevators in residential buildings on campus. Students have reported that washer and dryer machines have been out of order for several days to a week, elevators break down with people inside regularly in Towers and plumbing problems with showers and toilets have taken weeks, or in some cases months, to be fixed since the beginning of Fall 2017.  Many of these issues have persisted in dorms.

Ernie McClatchie, director of facilities, grounds and maintenance, said that while he does not believe there has been an increase of requests this year, the issues they have received are harder to fix than they have been in the past. These bigger fixes can require more parts and materials to complete and are labor intensive. This is because some of the college’s residential buildings were built more than 50 years ago, leading to an increase in deferred maintenance. McClatchie did not respond to requests for data on how many maintenance requests have been filed this year and in years past.

In September, freshman Lauren Ashe said she was about halfway through her shower on the fourth floor of East Tower when someone began knocking on her door and yelling. It was an RA, who told her she was flooding the bathroom in the floor below. She was asked to continue her shower in another bathroom.

“That shower has been out of order ever since,” Ashe said in mid-November. “All they’ve done is put a sign that says, ‘Out of order’ on it.”

McClatchie said that many of the older buildings, like the quad residential dorms, have issues with plumbing that are hard to isolate because the valves that turn the water off are old and no longer work. The upper and lower residential quads were built in the 1960s. 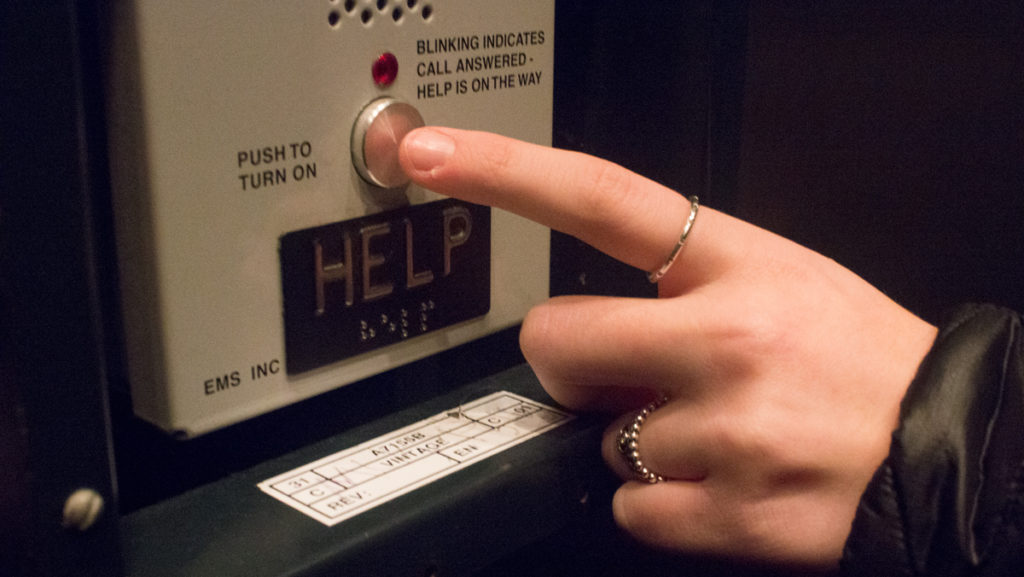 Students at Ithaca College have reported getting stuck in elevators in the East and West Tower dorms. These are some of the issues with the facilities that have plagued many of the residence halls. College employees have attributed these problems to aging facilities. JULIA CHERRUAULT/THE ITHACAN

The plumbing in that bathroom has been fixed over Thanksgiving break, when most students were away, because the water system had to be turned off to make repairs. McClatchie said that most plumbing issues, such as a leaky roof or flooding toilets, are normally dealt with quickly to minimize potential damage and ensure safety. However, larger, deeper issues, like replacing older parts, can be harder to fix. McClatchie said this was the case with the shower on the fourth floor of East Tower.

The women’s bathroom on the second floor of Landon Hall also had plumbing problems, freshman Brianna LaSita said. The water pressure was so light in one of the showers that LaSita said students avoided it, which caused people to mainly use the one shower with normal water pressure. Also, when someone would flush a toilet while the shower was running, the water would get scalding hot. The issue was brought up to the floor’s RA in a floor meeting.

The second floor Landon Hall RA, senior Chae Williams, confirmed that a maintenance request was filed shortly after the floor meeting Sep 17. Before Thanksgiving break, Williams said the temperature problem was fixed, but the water pressure remained an issue.

McClatchie said that a request for the shower temperature to be fixed was filed Sept. 20 and was addressed Sept. 21, but the request did not mention a water pressure problem. After the shower pressure issue was brought up in a phone call to facilities, the shower heads were replaced.

McClatchie said that sometimes there are simply more requests coming in than the crew can get done within that day or week. He said communication could be improved when requests are filed — it is common for people to think that others have submitted a request for a problem when no one actually has.

Freshman Sydney Corcoran lives in Hood Hall. Early in the semester, she said, the washer and dryer machines broke for about a week and a half. With one of the two washers in the building broken, she said, the only working washer was always full. She said she had to haul her laundry to either one of the Towers, where her friends live, and did her laundry there.

“With only one washer and over 100 people living in the dorm, it’s a pain in the butt,” Corcoran said. “Usually I could have thrown it in, done my homework and then switched it over really easily. Now, I have to carve out two hours to do it.”

As of 2016, the college had over $200 million worth of deferred maintenance issues to address. Of this budget, $36 million is related to the modernization of the residence halls, such as the upper and lower quads. For the 2016–17 budget, over $9 million was allocated to addressing deferred maintenance on campus. The total facilities budget for the year totals $2,415,371.

Junior Jake O’Connor said Terrace 12 has only two washer machines for the 84 residents who live there, but that one of them has been broken on and off for all three semesters he has lived there. He said that while the broken machine is usually fixed within a day, it is still a major inconvenience. O’Connor’s RA, sophomore Daniel Sullivan, said he has sent in several maintenance requests concerning the broken washer. He said even though it is fixed within a day each time, it breaks shortly after.

Jenny Pickett, assistant director of Res Life, said while older facilities can be the source of some problems, sometimes it is user error and education that causes facilities to break. She said that with broken washer machines, it is often because something like Chapstick or coins was left in the pocket of a piece of clothing that broke the pump.

“It’s a known issue that facilities and Res Life are trying to address through our capital budget process,” she said. “We are working as we have money granted to us to make improvements.”

McClatchie said maintenance does not fix washer and dryer malfunctions. Instead, Mac-Grey Corporation, an outside contractor that has a contract with Residential Life, does. The only thing maintenance does in concern to these machines is remove clothes that are locked inside.

Freshman Megan Gregoire said she was trapped in the West Tower elevator for around five minutes Oct. 12. Coming from the 13th floor, she said, the elevator stopped and then shifted suddenly up and then back down several times until, eventually, it started running again. She said the experience was terrifying. She said that she is frustrated that other students are also getting stuck in the West Tower elevator and that its problems are not being fixed.

“When something happens, it takes forever to be fixed,” she said.

Gregoire said that, at the end of September, one of the elevators in West Tower was not working right for three days. It would stop on every floor, even when no one had pressed the button for it to do so.

According to the college’s website, each Tower houses between 13 to 27 people per floor among the 13 floors.

Ashe was headed back to her dorm room located on the fourth floor of East Tower on Sept. 15 when the elevator doors would not open. After she and the one other person in the elevator, freshman Sophie Mannarino, realized something was wrong, Ashe called her RA, sophomore Sobeida Rosa.

Rosa held the doors open with her legs while the two trapped people, Ashe and Mannarino, crawled over her.

“It’s really frustrating,” Ashe said. “You expect that when you get into an elevator that you should be able to get out and, you know, that’s not a worry that I want to have.”

Tim Ryan, assistant director for Environmental Health and Safety, said the standard procedure for students stuck inside an elevator is to use the call button in the elevator to call Public Safety, which should respond within minutes. For responders, standard procedure is to use a key to reset the elevator by turning it off and then back on again. If needed, Public Safety will turn the power completely off and do a manual rescue. 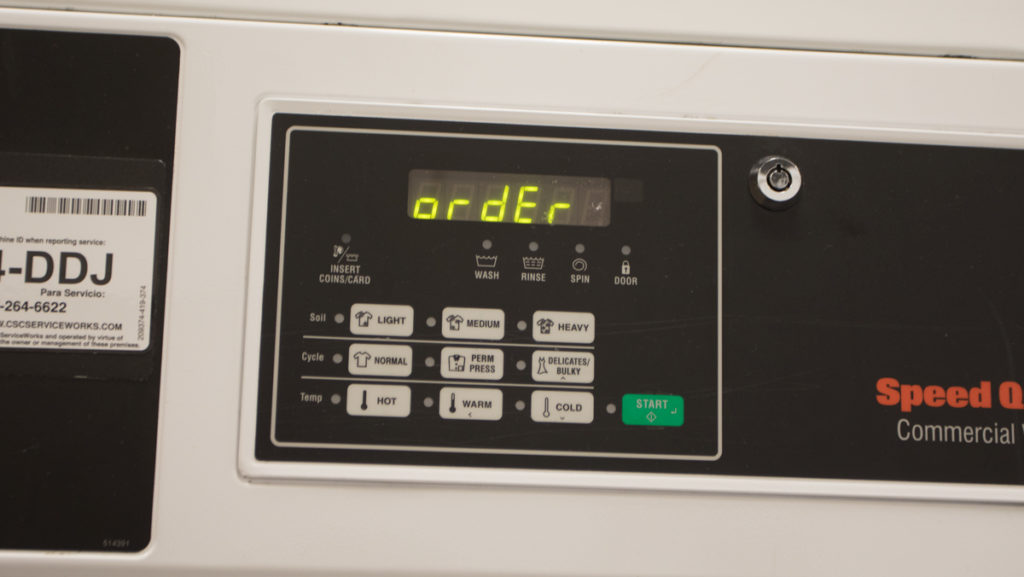 The wait time to fix an elevator can lengthen if officers have to wait for Schindler, the company who manufactures and fixes the elevators, to arrive. If the elevators need maintenance the college cannot provide, it could take up to half an hour for Schindler to arrive. If EH&S does the rescue themselves, it could take 15 to 20 minutes, Ryan said.

McClatchie said Schindler handles all problems concerning the elevators because it is a specialty that only they are qualified to handle. McClatchie said that, at first, Schindler had a hard time diagnosing the current problem with the East Tower elevator and that Schindler originally believed the issue to be computer-based and replaced the elevator software in hopes of fixing it. However, the problems continued, and now they believe the issue to be mechanical-based. This has presumably been the issue with the elevator for the last several weeks.

O’Connor said he felt frustrated that so much money has gone into fixing this one washing machine when it seemed more cost-effective to replace it. He wondered how much of his tuition went toward these problems.

“I feel like with the amount we pay to go here, stuff like that just shouldn’t be an issue,” O’Connor said.

Mannarino was also concerned about how much of her tuition goes into repairing broken facilities. She said she felt that there had to be a more cost–effective way to fix things more permanently.

“If I’m going to be paying that much money, I feel like they should have a working elevator,” Mannarino said.

McClatchie said he believes that, despite these issues, the college has a dedicated maintenance and facilities staff. There are 42 maintenance workers who solve electrical, plumbing, HVAC and structural issues on campus.

“Our No. 1 priority is trying to provide the best service that we can, and I think we go to great lengths to do that,” he said, “We have lots of people that work additional time to try to finish up projects and come in off hours to try to not inconvenience people.”