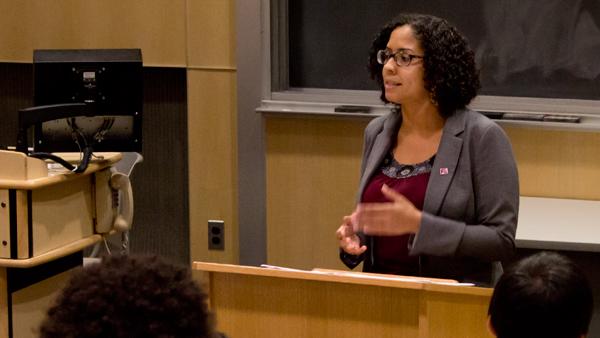 Sabrina Knight/ The Ithacan
Peta Lindsay, presidential candidate for the Party of Socialism and Liberalism, speaks to students about her ten-point plan on Tuesday, Oct. 16 in Textor Hall.
By Sydney Fusto — Contributing Writer
Published: October 31, 2012

Though national attention is primarily focused on the Democratic and Republican candidates, President Barack Obama and Gov. Mitt Romney will not be the only choices on the presidential ballot Nov. 6.

Several third-party candidates are pushing for votes during the homestretch of the presidential election. The candidates running include Gary Johnson, former governor of New Mexico, for the Libertarian Party; Peta Lindsay for the Party for Socialism and Liberation; Jill Stein for the Green Party; and former Virginia congressman Virgil Goode for the Constitution Party.

The Green Party emphasizes a sustainable and environmental approach to issues, particularly for job creation. Libertarians advocate the preservation of civil liberties and individual rights. The Party for Socialism and Liberation applies the socialist ideals of government-funded programs to education and healthcare. Finally, the Constitution Party strives to uphold the principles of the U.S. Constitution, the Bill of Rights and the Declaration of Independence by advocating for minimal federal involvement by giving more power to local and state levels.

One alternative political candidate, Lindsay, has already branched out to Ithaca College to inform students about the Party for Socialism and Liberation’s views.

Lindsay visited the college Oct. 16 to discuss her party’s platform and provide students with a political alternative. The event was hosted by IC Feminists, an on-campus organization that strives to reach social, political and economic equality for all genders.

Lindsay, who is 28, is not considered a legitimate presidential candidate by the Constitution, which states that the minimum age requirement for president is 35 years. However, Lindsay is on the ballot in 13 states, including New York, and is currently wrapping up her nationwide campaign tour.

Though Lindsay made an appearance at the college and explained her party’s platform, some student voters said they were not fully aware of political alternatives.

“I’ve heard of [the parties], but I don’t know in-depth details,” junior Katherine Alexander said. “I feel that they are not as publicized as the major parties.”

Gary Odom, former national field director for the Constitution Party and current staff worker for the Virgil Goode campaign, said corporations control media outlets and are restricting coverage for these alternative parties because the parties do not represent the media’s political interests.

“The corporations that control the media have a lot of control over the [political] parties,” Odom said. “If the American media would just give people the facts, we might have a whole different system.”

“We are at a disadvantage because we have to spend hundreds upon hundreds of thousands of dollars for ballot access, and that is something the Republicans and the Democrats don’t have to do,” Kraus said. “We spend the majority of our funds on just making sure [the candidate] is on the ballot in as many states as possible.”

To be considered for the ballot, candidates must organize a campaign to reach the required number of signatures and pay a required fee. However, some candidates do not get on the ballot for every state, because each state has different fee and signature qualifications.

Despite financial factors, some voters feel that the Republican and Democratic candidates will continue to have an upper hand because of their established position in government.

Junior Katelyn Madison said though she may agree with Lindsay on many topics, it is more important to vote Republican or Democrat, because they are in a better position of power to accomplish goals.

“I do agree with what [Lindsay] said, and I do think she is a good leader,” Madison said. “But I think that the bigger candidates right now need our vote.”

Scott McLarty, the media coordinator for the Green Party, said the act of voting, no matter which party you favor, is the most important thing.

“You are expressing your political point of view by voting,” McLarty said. “And that’s a very important point.”