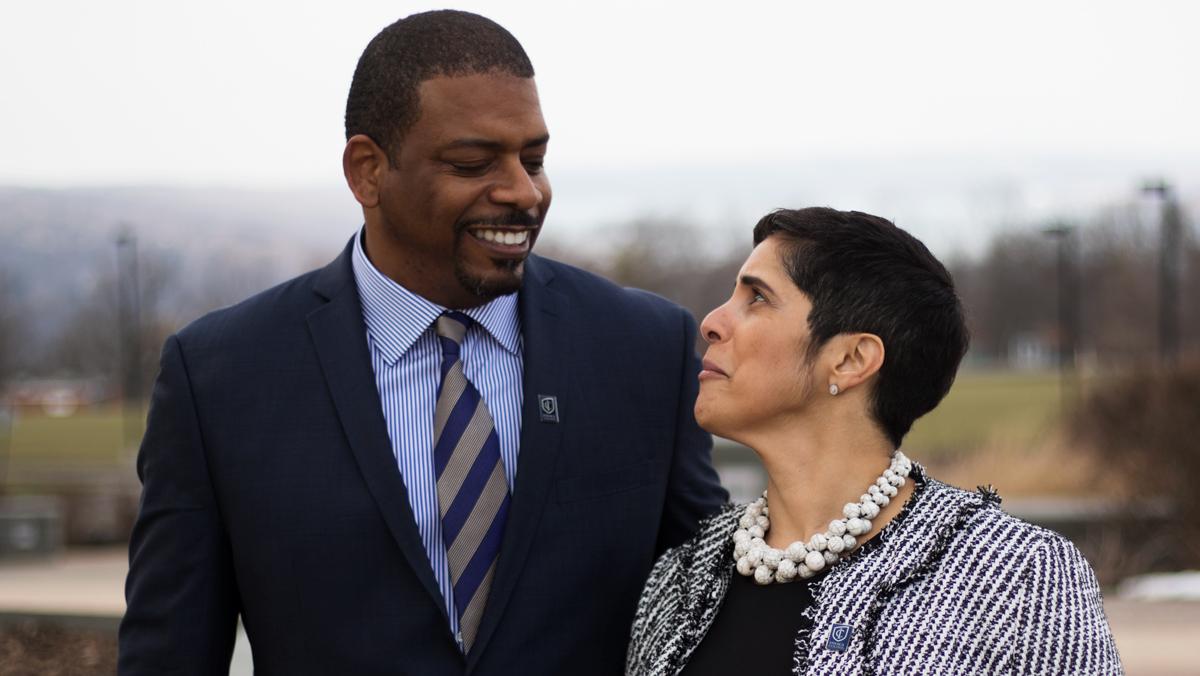 Connor Lange/ The Ithacan
A. Van Jordan, award-winning writer and poet and visiting professor at Ithaca College for Spring 2017, stood with his wife, President Shirley M. Collado, during her campus tour on the day of her presidential announcement.
By Ryan King — Staff Writer
Published: September 12, 2017

Ever since the Ithaca College Board of Trustees announced that Shirley M. Collado would be Ithaca College’s ninth president, there has been a significant amount of discussion about her arrival. But one detail that gets less attention is that her husband A. Van Jordan, an award-winning writer and poet, will also be joining the college community.

Jordan has won numerous awards for his writing. His book “M-A-C-N-O-L-I-A” received a significant amount of attention because of its message about race relations. The book uses poetry to portray the life of MacNolia Cox, the first African American to make it to the final round of the National Spelling Bee in 1936.

In addition to his career as a writer, Jordan has also taught at various institutions across the country. Most recently, he was the Henry Rutgers Presidential Professor at Rutgers University–Newark. Jordan is currently teaching at the University of Michigan and will be a visiting professor at Ithaca College this spring.

Staff Writer Ryan King talked to Jordan about his career and his wife’s new job at the college.

Ryan King: You have won a number of writing awards. What was your favorite award, favorite piece and what do you think the secret is to good writing?

Van Jordan: If I have to pick a favorite award, it was probably the Anisfield-Wolf Book Award which is an award that is given for a book that in some way bridges the gap in race relations in America. It sort of helps to increase the public thought about race relations and civil rights in America. That award was for my second book, M-A-C-N-O-L-I-A, at a ceremony in Cleveland, Ohio. That was a big deal … My father was dying of prostate cancer and he also had dementia. It was the last day I had seen my father in which he was really lucid. He had a suit on and he was in the audience. He got to see me win the award and then less than four weeks later, he died. And so, for me, that award holds a special place in my heart. … I think the secret to good writing is empathy for others. If you are going to be a creative writer, it’s hard to really have anything to say if you can’t think about the human condition. And in thinking about the human condition, you have to think about what the experience of others might be in trying circumstances.

RK: Because you have been successful as a writer, why did you decide to teach?

VJ: Thank you for making that assumption. Most poets in America teach at colleges around the country. Part of it is just making a living, but the other part for me, is that I really enjoy my interactions with students and I gain a great deal out of discourse from the classroom. When I am working on a book, particularly at this point in my career, I enjoy going into the classroom and talking about that subject matter with the students. … It’s a great opportunity for me because writing in itself can be a very lonely profession because you spend so much time by yourself.

RK: When did you first hear that your wife was going to be president, and what was your reaction?

VJ: When we got to the campus and took the tour, I was blown away by it. Not just the landscape and architecture, but by the students and the energy on campus. It just seemed like a good fit… We were very excited when we found out that she was selected as the new president.

RK: A lot of college students tend to heavily scrutinize leadership at colleges. Here, for example, students protested the previous president for not effectively addressing racial issues on campus. As her husband, do you have any concerns about that happening to Collado?

VJ: I’m always going to be concerned about whether she has the support that she needs, whether it is at Ithaca or anywhere else. The specific issue around the political climate at Ithaca didn’t really concern me that much. I say that it didn’t concern me with Shirley because I look at her style of leadership, I look at what she’s done in the world, and I just felt that this was a good fit for her. She has a specific skill set that Ithaca quite frankly needed at that time. And despite all the controversy, I thought that Tom Rochon did leave the school in good financial shape. … One of the [problems] that a lot of colleges had after 2008 was that they got into dire straits financially. Ithaca didn’t do that. Ithaca stayed on solid grounds. And so, I saw it as an opportunity for her. I just think that she’s a perfect fit at this time for the college.

RK: So my understanding is that you had a prior commitment to the University of Michigan but plan to teach at the college later on. Is that true?

VJ: Yeah, that’s true. So I had already pretty much signed on the dotted line to come back to the University of Michigan when Shirley got the nomination. So we were trying to figure how we could work this. Once I got to Ithaca and met students and met Dean Gayeski, I was encouraged. I said if there was any way I could be involved on the campus, I would be open to ideas. I will be doing a mini course there, probably in the Spring. Just whenever there’s an opportunity for me to come in and do something on the campus — whether it’s a one-day workshop, a 1-credit mini course — I’ll be doing that over the years.

RK: So I want to end with a personal question that you don’t have to answer if you don’t want to. How did you and Shirley first meet?

VJ: That’s a long story, but the Cliff Notes version is that we had a friend who had been trying to fix us up for over two years. And neither one of us were motivated to take her up on her offer until finally she just kind of shook us both and told us to get together and we finally met and that was it. We both had very busy schedules. There had been times in which we were in the same location but just missed each other. [Eventually] we had enough time to have dinner. It was like we had known each other for years.

The Ithaca College Writing Department will give high school students a glimpse of life as a writing major, with a new program.

Vivian Gornick, a renowned author and critic, will speak as part of the Humanities and Sciences’ Distinguished Visiting Writers Series at 7:30 p.m. tomorrow in Beeler Hall of the James J. Whalen Center for Music. Gornick will offer a public reading from her work and will host a discussion afterwards. Gornick is the author of…

Acclaimed essayist to speak on campus