Student protesters demanded the resignation of Ithaca College President Tom Rochon and stated they refused to work with him on diversity initiatives during a protest Nov. 11 that drew over 1,000 members of the campus community to Free Speech Rock.

The demonstration featured an approximately 25-minute “die-in” on the Academic Quad. It is the latest in a string of protests by the group POC at IC following racist incidents on campus this semester. POC at IC, which stands for People of Color at Ithaca College, is the group that emerged about three weeks ago surrounding concerns about the college’s responses to race-related incidents. The Student Government Association is currently holding a vote of no confidence against Rochon, while Faculty Council passed a motion Nov. 10 to hold a faculty vote of no confidence.

About 20 members of POC at IC, most wearing black and gold “Fist of Solidarity” shirts designed by senior Rita Bunatal, lined up with their arms linked before members of the group spoke. Three speakers addressed the crowd: sophomore Brittany Gardner, sophomore Tyler Reighn and senior Zaira Gomez.

Gardner began the event by leading the crowd in a chant of “Tom Rochon: No confidence.” She then said that the walkout was in solidarity with students of color facing similar struggles at the University of Missouri, Yale University, Smith College and students across the country.

Reighn then said POC at IC has no desire to work within the “broken structure” of the college and that the group refuses to work with Rochon. 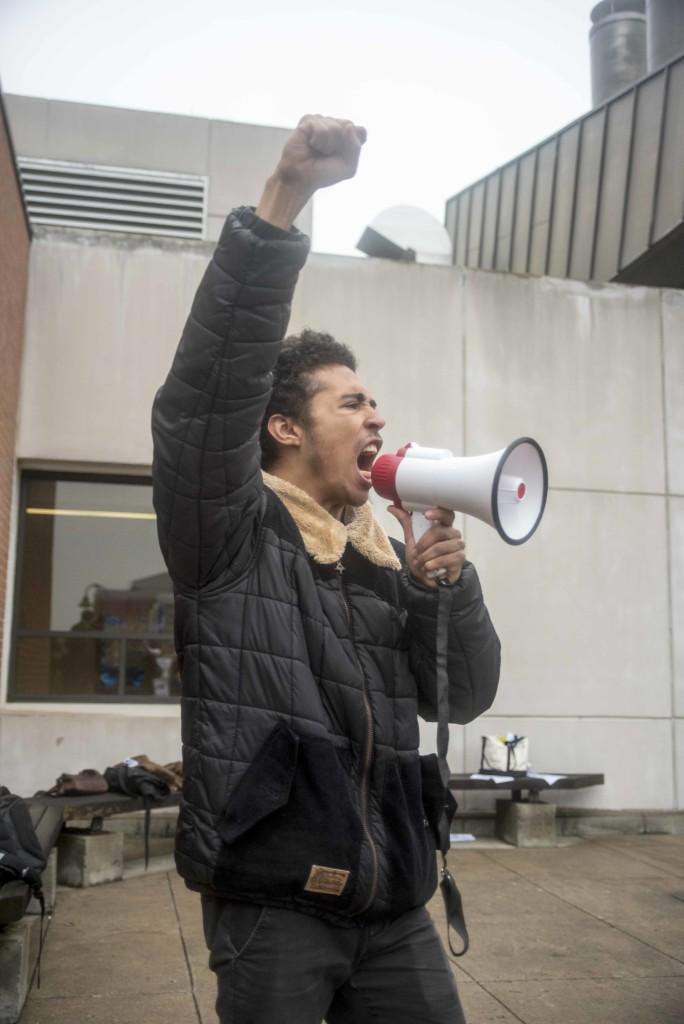 Gomez then took the megaphone and reiterated that the group refuses to work with Rochon and wants him to resign or be removed. She said the group wants radical, transformative change in governance and structure at the college and to bring a sense of safety and dignity to campus.

At the beginning of the die-in, hundreds of participants chanted “Tom Rochon: No confidence.”

This was followed by a 15-minute period of silence in solidarity with people of color at other college campuses who face similar struggles.

The silence was then ended, and members of POC at IC led chants of “Tom Rochon: No confidence” while walking back to Free Speech Rock.

When they were back at Free Speech Rock, members of the group led chants of “Amandla: Awethu,” a South African chant meaning “power to the people.”

The group then ended the rally with the same chant that has been heard at every protest over the past three weeks.

The statement cited specific incidents on campus this semester as causes for concern.

Resident assistants on campus protested in September regarding comments made by Public Safety officers at RA training. One officer, Terry O’Prey, said racial profiling does not happen at the college, while another officer, Jon Elmore, said he would shoot anyone on campus with a BB gun. At the kickoff event for the Blue Sky initiative, alumni J. Christopher Burch ’76 and Bob Kur ’70 called alumna Tatiana Sy ’09 a “savage” multiple times after she described her “savage hunger” for success. The day after the Blue Sky Reimagining Kick-Off event, students received invitations to a racially charged “Preps and Crooks” party that the off-campus fraternity Alpha Epsilon Pi was planning. The statement also lists “systematic oppression of faculty of color” and “disregard for the safety and well-being of students of color.”

Rochon declined a request for comment. Tom Grape, chair of the Ithaca College Board of Trustees, released a statement Nov. 11 that said it was difficult for him to see the community going through such a difficult time.

“I respect that many of our students and faculty are choosing to express their concerns about Ithaca College’s climate and direction though their public discussions and their votes,” he said. “The board members and I remain committed, as always, to making decisions that take into consideration the input we receive from the college’s executive leadership, as well as the voices of faculty, students, staff, parents and alumni.”

Grape said he hopes the conversations will continue and that the board of trustees are committed to addressing the issues.

“We understand that the issues are serious and significant, and we are listening,” he said. “I am certain that Ithaca College will emerge from this chapter stronger and more resolute in its direction forward, and the board and I are actively partnering with Tom Rochon and other campus leaders to make sure that happens.”

The SGA is holding a vote of no confidence in Rochon, which was emailed to all students Nov. 4 and will be open until Nov. 30. Students will vote on whether they have confidence in Rochon and his leadership. The results of the vote will then be released Nov. 30 in an SGA meeting, as well as posted online and sent to the board of trustees.

SGA President Dominick Recckio called the protest a historic moment at the college.

“It was a hallmark of so many people’s work, and I believe it will cause real change on this campus, and that change will happen fast,” he said.

A number of students said the protests were necessary.

“I’m heartened by student activism on this campus and people really taking a stand for our community that has been marginalized,” junior Taylor Ford said. “I think if you have a massive student-led demonstration like this, it sends a powerful message to the administration, to the board of trustees.”

Junior Siena Cid said she attended the protest because she has experienced racism on campus when she was called a “stupid n—– girl” by a resident of her dorm during her freshman year.

“It was torture to see him every day,” she said. “That’s why I’m here: because no one should have to go through that.”

Freshman Alyse Harris cited the events happening across the nation as a reason why the protest needed to happen now.

“I think the time is right now. It’s time to act,” Harris said. “It’s not just here at Ithaca. It’s across the country. It’s at the University of Missouri. It’s in California. It’s at Yale. You can’t turn your head anymore. You can’t turn a blind eye because that’s what happens right now. We are done being treated as second-class citizens. It is time for us to take our rightful place as students here at Ithaca College.”

Senior Stacey-Ann Ellis said she hopes the protests make an impact on Rochon.

“I would hope it actually has an impact on his emotions, his perspective and how he actually approaches the students,” Ellis said. “If it makes no impact on him, then he is steel. It has to make a change in him. I think this rally is one of the most major ones, and it will definitely make its mark in comparison to every other one.”

A handful of students in attendance were upset with the protest. During the protest, one student walked through the crowd with a sign that told protesters to stop disrupting his education.

After the protest, one student stood on top of a bench while holding a sign that said “I Support Tom Rochon.” About 50 students crowded around the bench as they talked about issues on campus.

A number of Yik Yak posts after the event were unhappy with the protests.

“People are going to say I’m being insensitive for this comparison but I honestly feel like i’m in high school again pulling drama out their ass and everyone bandwagons on.”

Other posts that were removed included racist remarks.

A number of faculty members stood in support with the demonstrators.

“I am extraordinarily proud of the students, faculty and staff who are here,” said Bruce Henderson, a professor in the Department of Communication Studies. “We often undervalue huge, symbolic gestures, and we need to recognize that this matters. It has an effect on the actual lives of the people at this campus.”

Belisa Gonzalez, associate professor and director of the Center for the Study of Culture, Race and Ethnicity, said the focus right now is on African, Latino, Asian and Native American students.

“I hope that more awareness and more momentum will come out of this event. POC at IC talked about their goals,” she said. “I see faculty and staff everywhere, and this is an issue that is not going away. I hope that the administration sees that and does something about it.”

Patricia Zimmermann, a professor of media arts, sciences and studies, said she thought it was a historic moment.

“I have never seen an action this large, and I’ve never seen a coalition this big of students, faculty, staff, some administrations and people expressing support from around the country: Smith College, Hamilton, Wells,” she said. “I feel it is a historic moment and a turning point for Ithaca College.”

Claire Gleitman, professor in the Department of English and president of the School of Humanities and Sciences Faculty Senate, said it was an impressive protest.

“I think this is magnificent. I’ve never seen a display of student activism this powerful and engaged and focused,” she said. “I canceled my class so that students could be here.”