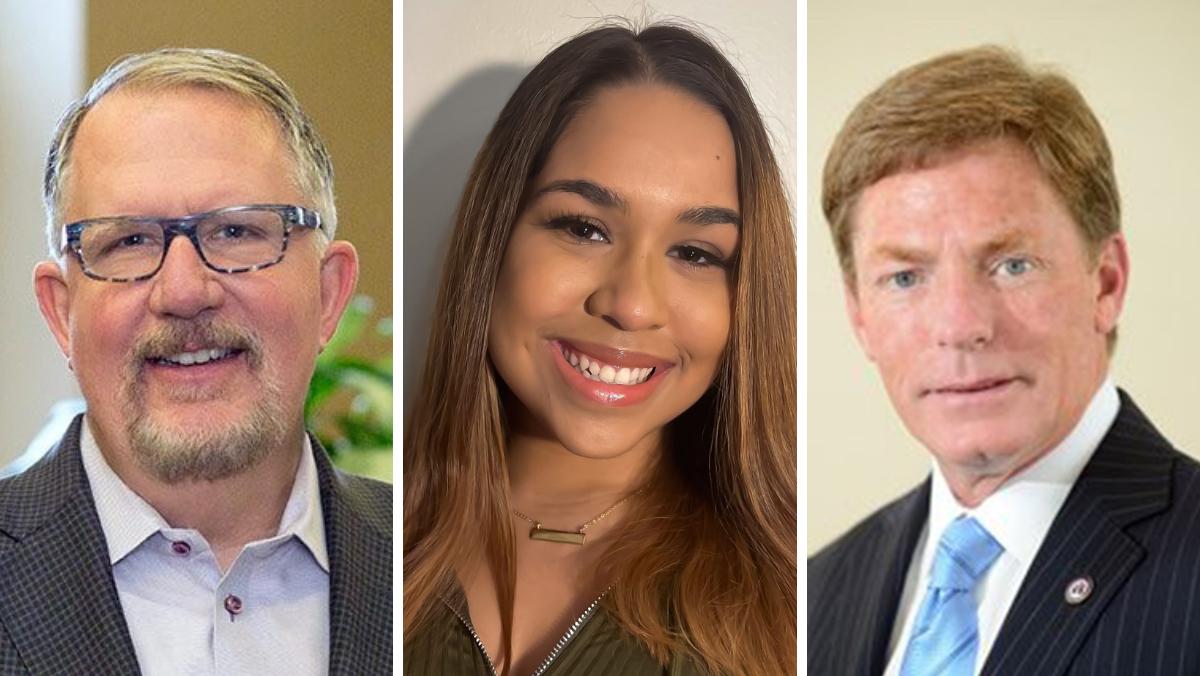 Courtesy of IC News
The Board of Trustees elected three new trustees. From left John Neeson ’84, Alexa Rahman ’24 who will serve a two-year term as the student trustee, and Kenneth Fisher ’80.
By Caitlin Holtzman, Syd Pierre — Editor in Chief, News Editor
Published: May 26, 2022

The Ithaca College Board of Trustees approved the operating expense budget for the 2022–23 fiscal year, elected three new members to the board of trustees and re-elected six members — including Luvelle Brown, superintendent of the Ithaca City School District (ICSD) who is facing allegations of child abuse — at its May 2022 meeting.

The meeting was held from May 19 to 21 on the college’s campus. In a May 25 email sent to the college community, David Lissy ’87, chair of the board of trustees, and President La Jerne Cornish summarized the highlights of the meeting.

Brown has been on the board since 2018 and the superintendent of the ICSD since 2011. Brown has been facing pressure from the Ithaca community to step down from these positions after allegedly abusing his son and misusing his power as superintendent. IC Alumni Against Austerity and IC Open the Books started a petition in February 2022 demanding Brown step down from his positions. As of May 25, the petition has 308 signatures. Both groups also called for Brown to not be re-elected to his position on the board.

David Bachrach ’70 and student trustee Kalena Yearwood ’23 are both stepping down from their positions following the completion of their terms.

According to the email, ​the operating budget reflects an estimated 4,310 full-time undergraduate students enrolled at the college and includes $115.8 million dedicated to unfunded institutional financial aid. This number only represents the college’s direct investment in students and does not include restricted financial aid, donations or government funds.

The board approved a $19.3 million capital budget, which includes $4.8 million for deferred maintenance projects and $2.15 million for Information Technology (IT) upgrades. The approved capital budget also includes $6.7 million for campus improvements, including the exterior renovation of Dillingham and Alumni Circle renovations, which are funded out of the board’s strategic reserves.

The budget also includes an overall 4.5% increase in total compensation and benefits, which includes a July 1 base salary increase of 2% for employees meeting expectations and an additional 0.5% pool available for merit, equity or market adjustments during the upcoming fiscal year.

Jack Bryant, associate professor and program director of the Department of Media Arts, Sciences, and Studies, was awarded tenure.

David Weil ’87, MS ’89, chief information officer for IT, spoke to the board about the college’s changes in technology and how it can continue to evolve. During the meeting, Weil shared that IT maintains over 4,700 laptop and desktop computers with over 55 miles of fiber optic cables connecting buildings across campus. Additionally, the college held 185,110 Zoom meetings in 2021.

A working lunch was held at the meeting to allow for two dozen faculty and staff members to share how they are using technology in their teaching and learning.

In the email, the board also shared that a reception and dinner was held for two years’ worth of newly promoted and tenured faculty — a tradition that has not been held because of the COVID-19 pandemic.

Following the board’s meeting, Lissy and James Nolan ’77, vice chair of the board of trustees, held a meeting over Zoom with over 70 students, faculty and staff to discuss campus morale; alumni engagement; program changes in the School of Music, Theatre, and Dance; budget priorities; and financial aid.