Board of trustees hosts forum with college community 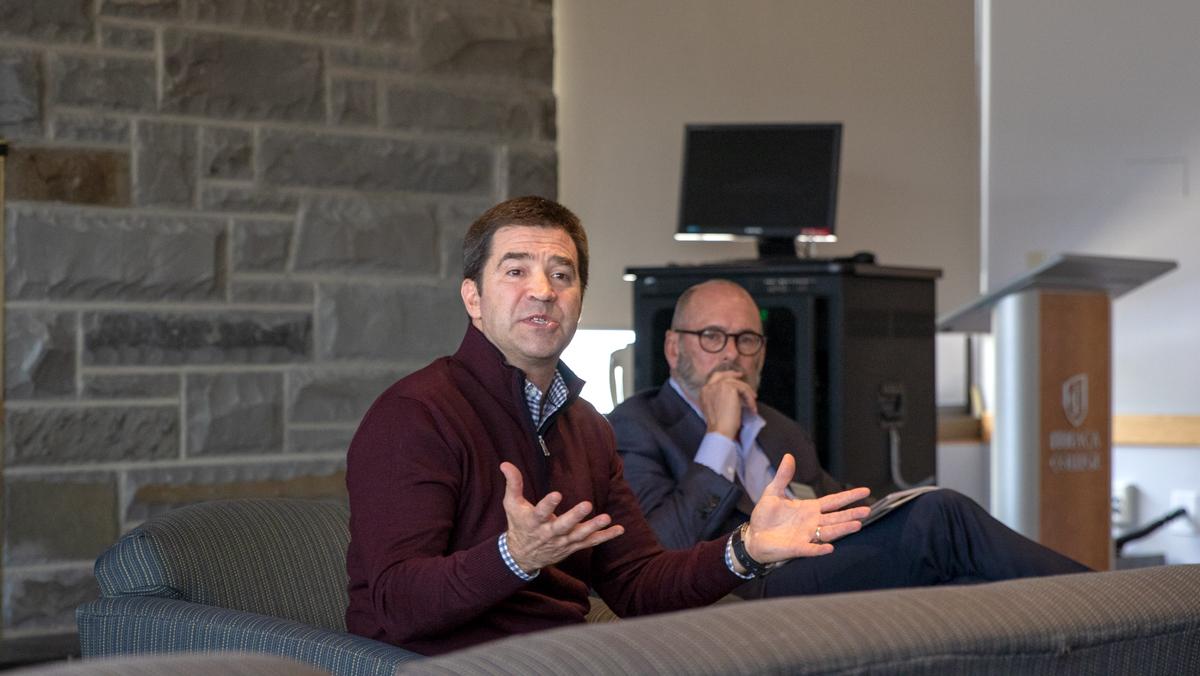 The Ithaca College Board of Trustees held an open forum Feb. 15 to discuss the board of trustees’ winter session and to take questions about their work from members of the college community.

Approximately 40 people, including students, staff and faculty, attended the forum, led by David Lissy ’87, chair of the board of trustees, and vice chair James Nolan ’77. Topics varied from the Board of Trustees’ role in the ongoing development of the college’s strategic plan; diversity, inclusion, and representation and the state of finances at the college.

Audience members asked what issues the board of trustees addressed in their meeting, what input they had on the search for a dean of the School of Humanities and Sciences and how to best reach alumni donors.

Lissy spoke openly about the state of the college’s finances, which has recently raised concerns among the college community. He said that while the college is struggling in a similar way to peer institutions with rising tuition prices, he thinks it has the ability to control its future more effectively than others.

“While this term ‘burning platform’ has been used a lot,” Lissy said, referring to a perceived crisis–situation concerning higher education finances, “it’s not burning in the sense that we’re worried about whether we’ll be able to turn the lights on next week. What we’re worried about is, if we do nothing, the long-term picture does not look good.”

Lissy said the board of trustees can only approve the overall budget and did not affect specific line–items in college’s budget. Lissy said the trustees are working on how to better the campus through increased donations from alumni.

“Our reality — I don’t want to sugar coat it — we have a modest amount of historical success at giving,” Lissy said. “We have an endowment that I would characterize as modest. That said, you can’t let what might have been in the past continue, and the truth is, there’s plenty of Ithaca alums out there.”

Lissy distanced the board of trustees from being the arbiter of a solution to the college’s finances.

“The board, we are not going to be telling the campus what those solutions are,” Lissy said. “We’re participating in it, but collectively, we have to agree upon solutions, some of which will be really fun to think about, and others will be a little bit harder because change is sometimes a little bit hard.”

“Diversity and inclusion isn’t a box you check off; it’s baked into a culture,” Lissy said. “I can confidently speak for the board and say that we don’t feel like we’ve arrived [at that culture].”

Nolan emphasized the board of trustees’ commitment toward the development of the strategic plan in their session and the enthusiasm they have toward producing an effective result.

“[The Strategic Plan] is consuming the board’s attention right now,” Nolan said. “The strategic plan, the effectiveness of putting that together, is really top of mind.”

Lissy said that this strategic plan was unlike previous ones he had worked on and spoke highly of the progress that the steering committee is making. The steering committee previously briefly fell behind a deadline to form working groups based on community generated themes, but it caught up and is currently beginning to hold biweekly meetings to develop the strategic plan based on the thematic divisions it created.

“I’ve only been around the college for two strategic plans,” Lissy said. “I can tell you, already, what’s absolutely exciting and clear about it is it’s not the board of directors’ Strategic Plan; it’s a strategic plan that’s evolving from the various groups on campus. The work that’s been done is phenomenal.”

Lissy also said that the board of trustees is having ongoing conversations about extending mental health support for students after the hours of the Center for Counseling and Psychological Services because resident assistants and other on-site personnel are not trained for mental health care. He said the board of trustees, with Rosanna Ferro, vice president for student affairs and campus life, spent considerable time exploring ideas for solutions at their latest session.

“[That was] one of a few other gaps and areas that need rethinking or support that don’t exist,” Lissy said. “There’s some [gaps] that are unique to IC, and there’s some that have to deal with realities of Tompkins County and the professional resources that exist in Tompkins County.”

Nolan said that the board of trustees is committed to addressing this issue, but that there was not a solution in place yet for mental health support after hours.

Freshman Mark Scaglione, who attended the forum, said it was important for the campus to stay informed about the board of trustees through these forums.

“As a freshman, seeing how they’re reaching out, I think it’s important,” he said. “As we move forward, we have to see where we are and where we’re going.”