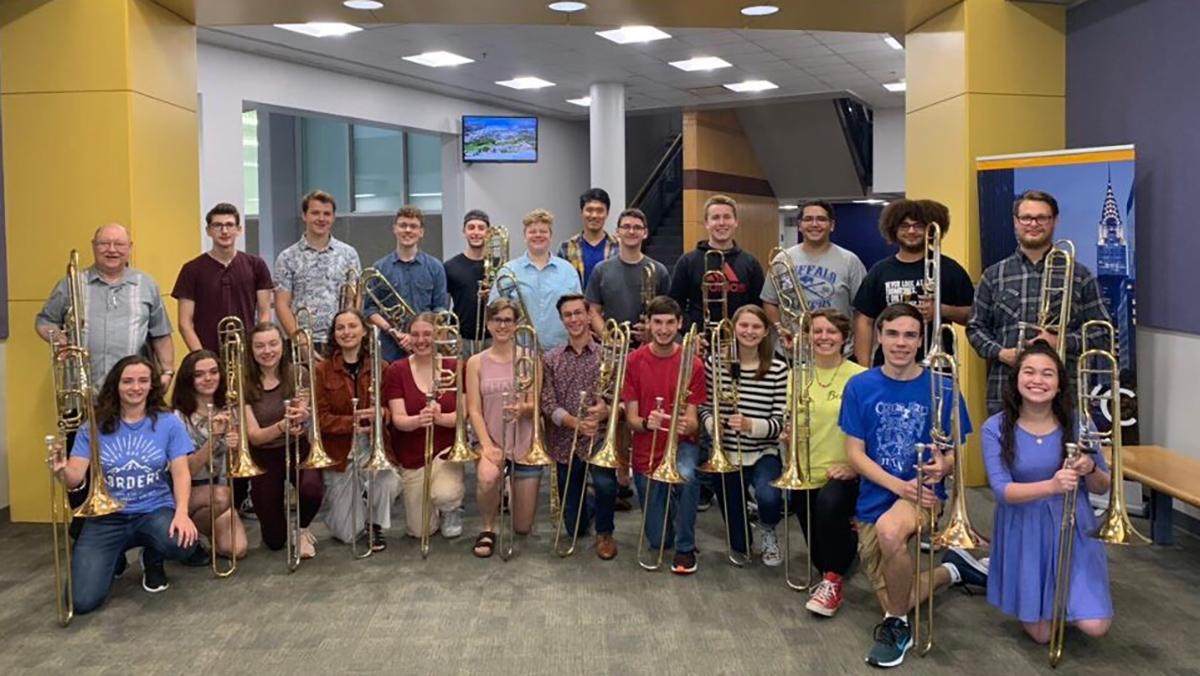 Members of the campus community are reflecting on the lasting legacy of Harold Reynolds, recently retired trombone professor in the Department of Music Performance at Ithaca College, as a professor, mentor and friend.

Reynolds’s death was announced to the campus community Aug. 30 through an Intercom post. Reynolds worked at the college for 33 years and served as the adviser for the Trombone Troupe, the college’s trombone choir, before retiring last year.

Jeff Dunn ’12, lecturer in the Department of Music Performance, said Reynolds — who was referred to as Doc by his students and colleagues — had previously spent a decade teaching in public schools in Texas, freelancing with ensembles, playing in orchestras and teaching at Nazareth College in Rochester, New York; SUNY Geneseo in Geneseo, New York and the University of North Carolina Greensboro in Greensboro, North Carolina.

“Doc is responsible for the culture of the trombone studio at Ithaca College, where he fostered an environment of dedication to improving oneself, and initiating traditions,” Dunn said via email. “Some of this was for the benefit of our little community, like annual trombone studio celebrations, but also the traditions of high standards in performance and musical endeavors with the Trombone Troupe. He was a constant source of experience, motivations, and inspiration to me.”

Dunn said Reynolds always supported students’ interests and his philosophy was to let students be themselves.

Tim Smith ’03, lecturer in the Department of Music Performance, echoed the sentiment, noting that Reynolds met students wherever they were on their journey with playing trombone.

“Regardless of their ability, or their musical interests, or their intentions, you know, what role the trombone was going to have in their career moving forward, whether they were going to be an educator, or a performer or just kind of always have it in the background of their life lives,” Smith said. “He met students where they were and matched their interests. … I think I always knew that as a student, but I really didn’t understand it and digest it, so to speak, until I was a professional teacher and performer myself. And I think that’s something that’s very special.”

Smith said he — like many other alumni — remained connected to Reynolds long after graduating from the college.

“He went to a lot of student weddings, played in several of them himself as kind of a guest musician,” Smith said. “He was always available for a phone call, even after graduation.”

Junior Aidan Bradley said he has played in the Trombone Troupe for all three years he has been at the college and is now the president of the troupe. Bradley said Reynolds created a welcoming and safe environment for students.

“Since his passing it’s been nice to see just how far his teaching has spread,” Bradley said. “Just all of the students he’s taught, whether that be at Ithaca College or his various other positions he held before. He definitely had a very personal way of teaching, which is why his passing was definitely hard for a lot of the trombone studio. You know, he cared more about you as a person even more than he did about you as a player.”

Smith said the Trombone Troupe had commissioned a new piece in Spring 2021 in honor of Reynolds’ retirement that was slated to premiere in November 2021. He said the piece was delivered to the troupe a week before Reynolds passed away.

“I’m heartbroken, you know, not only for his passing, but that he can’t join in the celebration of his career with us,” Smith said. “And here, this very special piece that was written expressly to the strengths of his musical interests and his diverse background in jazz and commercial and orchestra. But we’re going to go ahead and be premiering that at some point this year.”

Senior Kurt Eide said he was drawn to Reynolds’ musical skill and versatile trombone playing. Eide, who is also a member of the troupe, said Reynolds helped to put the college’s trombone studio on the map.

“It’s sort of a manifestation of the studio culture we have — everyone in the studio is in troupe,” Eide said. “With Trombone Troupe, not only does every major do it, but non-majors are more than welcome to come audition and a lot of them play with us and even have officer roles. Which I thought was another great thing is that if you wanted to make music, Doc was there ready to make music for you. And he made sure that the trombone troupe followed in that example.”