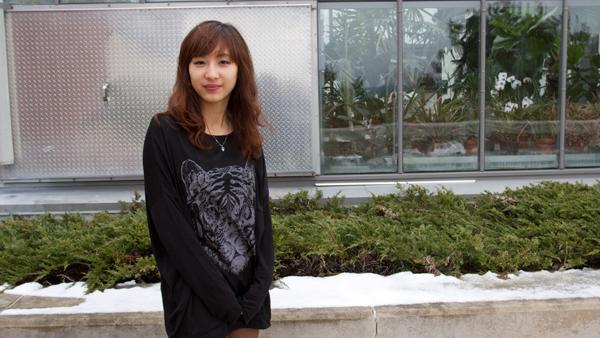 Marianna Dunbrook/The Ithacan
Junior Kelly Zhang, a student from China, stands in front of CNS. She is the president of the recently formed Chinese Students and Scholars Association.
By Jeremy LiMichael Tkaczevski — Staff Writers
Published: March 21, 2013

The transition from high school to college is already a daunting task for American students, but Chinese students face a greater challenge after moving away from family, friends and their native language to a new country.

As Ithaca College expands its recruitment efforts in China, there is a rising number of students from China here on campus. Like other international students, Chinese students experience a change in food, culture and language more drastic than American students face. However, the difficulty of the change does not deter Chinese students from coming to the college and the country.

Junior Mei Shanshan said she always dreamed of coming to America to study. Mei said she applied to Ithaca College, despite never having heard of it before, because it offered the most financial aid compared to other prospective colleges.

“I went to Chinese college for a year, and I was majoring in English at the time, and then I quit the college because I just think that wasn’t interesting enough for me,” Mei said.

Junior Kelly Zhang, president of the new Chinese Students and Scholars Association, said she is getting an education in America she wouldn’t be able to get in China.

“American students here are really nice, and professors are extremely friendly and attentive to my needs,” Zhang said. “It is a small school and that’s really important to me. It means I have more opportunities to develop professionally within my major.”

The college has been expanding its recruitment operations in China for the last three years. Thomas Kline, director of music admissions and preparatory programs, said he and other faculty held 420 auditions in Mainland China, 220 of which were in Beijing, over the course of four weeks last summer. Kline said the college is seeking out international students who are interested in American teaching methods, which may differ from those in other countries.

“It’s a different educational process,” Kline said. “Personal expression and personal ideas are stressed more over here than in Asia, I’ve found. Many times, students are looking for a different way of thinking about education. It broadens their horizons, just like study abroad broadens our students’ horizons.”

Freshman Liu Gengshu had learned about Ithaca College’s music program ahead of time. He auditioned at the college’s recruitment fair in Beijing in 2011 and was accepted later that year.

“It wasn’t that hard of a choice to make, as I got pretty good financial aid,” Liu said.

Mei said the reality of American college life was harsher than what she expected before she came to the college. Communication was her biggest obstacle at first, she said.

“When I first got here, my English was really not even close to the English I am talking right now,” Mei said. “I had a really heavy accent and almost zero knowledge of American culture. I didn’t have any relatives, and I didn’t know anybody in the United States. So coming here is a brand new world to me.”

Mei’s knowledge about American culture before coming to the U.S. was based on television shows and movies, though she knew they were unrealistic, she said.

Like other international students, Liu faced the challenge of the unfamiliar teaching style of American college academics after getting adjusted to his non-academic life, he said.

“Studying here in the U.S. requires a lot of self-discipline,” Liu said. “I was forced to use my time wisely and how to study more efficiently. It’s a different system. Classes were quite difficult, as American students talk fast to begin with, and they talk even faster in class. It is getting better.”

Liu came to the college to study music but decided he wanted to pursue a career in business instead. He said the switch between majors was much easier at Ithaca College than it would have been in China.

“I want to try more things, I want to explore,” Liu said.

Breaks between schools are usually good news for American students who can visit their friends and family back home. For many international students however, the trip back home can be too expensive, so breaks end up being lonely, Zhang said.

“I don’t like breaks,” said Zhang. “It’s very depressing, as everyone is gone, and nobody understands how you feel because of different culture backgrounds.”

This is the first year that Liu has been away from home for so long, he said.

“I am quite homesick, to be honest,” said Liu. “Life here is so different. I missed everything back home, the food, the people, the places. In fact, I am counting down how many days left before I can go home. But this homesickness in no way negatively impacts my study here, it’s a positive motivator.”

“It’s easier to communicate with my fellow international students,” Liu said. “We share more commonalities. American students tend to retain their own culture, and therefore are less adaptive when making friends. It’s hard to learn their way of communicating with each other.”

Mei said she wants to get a job in America as soon as possible. She said she has learned much since she first came to America and wants to share her experience with future incoming Chinese international freshmen, she said.

“You’re coming to the United States to learn about the American culture, to learn about a different system of learning and to learn as much as you can,” Mei said. “Talk to Americans, practice your English and try to reach out to American students. You’re scared of them, they’re scared of you too. If you don’t reach out to them, how can you even start bonding together? It’s going to be tough, but after the toughness, there comes understanding and agreement.”

Zhang’s and Liu’s interviews were originally conducted in Mandarin and were translated into English by Jeremy Li.