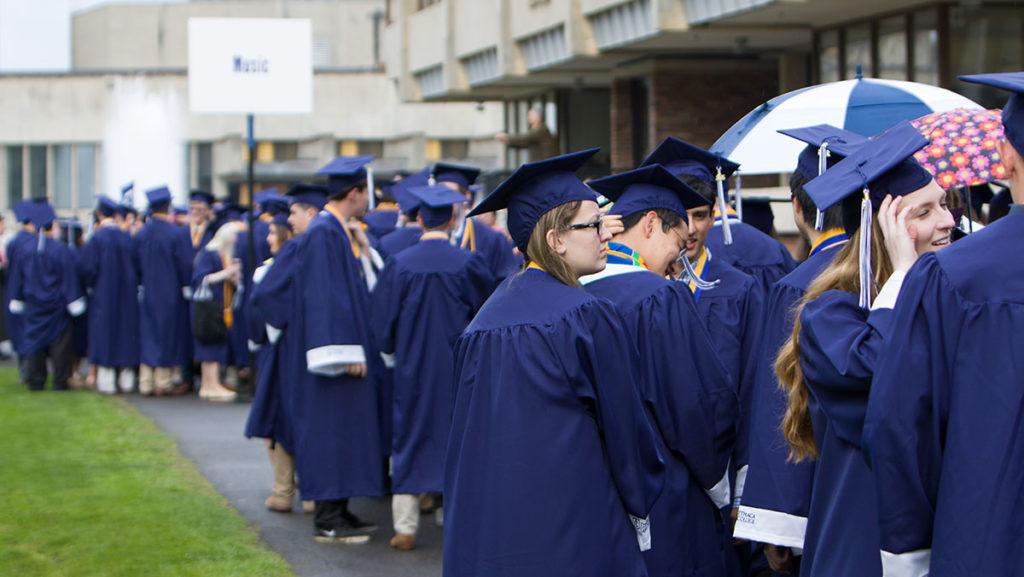 File Photo/The Ithacan
President Shirley M. Collado made the announcement June 8 that the in-person 125th Commencement ceremony had been canceled. Commencement had previously been rescheduled to Aug. 2 from its original date of May 17 following the college’s transition to remote learning in March.
By Skylar Eagle — Senior Writer
Published: June 30, 2020

Like many Ithaca College graduates, Chloe Landau ’20 was hoping to take graduation pictures at the iconic fountains in front of the Dillingham Center. Those pictures and other senior traditions, like Senior Splash, now have to wait until 2021.

President Shirley M. Collado made the announcement June 8 that the in-person 125th Commencement ceremony had been canceled. Commencement had previously been rescheduled to Aug. 2 from its original date of May 17 following the college’s transition to remote learning in March.

Landau said she was not surprised the Commencement ceremony was canceled but thought that the college should have planned a virtual graduation from the beginning.

“By pushing it to August, they gave seniors hope that it could still happen,” Landau said. “So many people were looking forward to it.”

Gov. Andrew Cuomo announced June 7 that outdoor and socially distanced graduation ceremonies with no more than 150 people would be allowed beginning June 26. There are 1,639 students in the Class of 2020. The college would have to hold more than eleven separate ceremonies, not including the families of graduates, in order to hold an in-person commencement under Cuomo’s guidelines.

Ithaca College is now transitioning to a remote commencement weekend Aug. 1–2. The email stated the college will send graduates commencement celebration boxes, including diplomas and covers.

Gabrielle Picca ’20, senior class president for the Class of 2020, said she was upset by the announcement, but ultimately understood because of health and safety concerns.

“I would say the things I felt the most sad about were some of the ‘lasts’ and final goodbyes you get to experience in your last semester,” Picca said. “Senior week is a time for seniors to just relax and celebrate their hard work over the last four years, and I think the loss of that was extremely difficult.”

Nolan Yowell ’20 said he was disappointed but not surprised by the announcement.

“I didn’t think there was any way we could get thousands of people in early August for a ceremony,” Yowell said.

The college will celebrate the Class of 2020 during the alumni weekend scheduled for June 25–27, 2021 with events specifically for 2020 graduates, including Senior Splash.

Picca said she meets with the commencement committee and senior leadership team weekly to find alternative ways to celebrate the Class of 2020, but plans are still confidential.

“I can promise that the commencement committee and the senior leadership team are working extremely hard to make the virtual commencement the best it can be,” Picca said.

She said her executive board has encountered obstacles in planning celebratory events in the middle of the pandemic.

“I think it was difficult to find ways to promote togetherness during a time of separation, especially when the future at the time was so uncertain,” Picca said.

Alex Gray ’20 said the college needs to listen to students and faculty when making decisions about the 2020–21 academic year and the Class of 2020’s graduation celebration.

Some members of the college community have expressed concerns about the college’s decision to begin the semester in person Oct. 5 with shortened breaks.

“A virtual graduation is, by nature, not as fulfilling,” Yowell said. “The celebration boxes are a nice touch. The college is doing what they can with a bad situation.”

Gray said he is also disappointed about the college’s plans for alumni weekend and a delayed in-person recognition for the Class of 2021.

“The problem for alumni weekend, and even the original August commencement, is that I’m already in graduate school, and it won’t be easy for me to take time off of my education to travel back to Ithaca for a celebration that will already feel worn out a year later,” Gray said

Thomas Bernier ’20 said he wants the Class of 2020 to have its own weekend separate from alumni weekend, including an in-person commencement ceremony during the summer of 2021 instead of a virtual celebration.

“We didn’t get a senior week at all; it doesn’t feel right to just shove us in with every class that got their own week,” Bernier said. “If the virtual graduation seems like a lot of work while feeling like just watching another impersonal video on the internet, and if it will make it so we do not even get the option of an in-person graduation next year, I wouldn’t want to have it.”